I get wet with comic Lewis Schaffer, talk toilets with comedian Charmian Hughes

In yesterday’s blog, American comedian Lewis Schaffer managed to creep in towards the end. Coincidentally, yesterday afternoon I followed Lewis Schaffer for 4 miles through the streets of Nunhead in South East London.

He had organised his second annual Beat The Bounds procession round Nunhead, in which several hundred people walk round the boundaries of the area hitting things – walls, railings, though never small children – with sticks.

There were stewards with dayglo jackets, musical accompaniment from banjo duo The Relatives, free bottles of water at the halfway mark and a free beer for walkers in the Old Nun’s Head pub at the end.

The first half of the walk was a great day out.

Then – perhaps because it was a Wimbledon Finals day – the heavens opened and part of the North Atlantic fell on our heads.

Afterwards, in the Nun’s Head pub, Lewis Schaffer told me: “They were happy because they were wet. They’re British. They love it. They love suffering.

“Last year we had 250 people. This year I think we had about 400. Some people come and only go halfway with us or they join us halfway through. It’s four miles and these British people, they’re lazy. When it started to rain, people caught the bus home. It was rain even by American standards.”

“Americans don’t have standards,” I told him.

“It was like Napoleon’s march into Moscow,” Lewis Schaffer continued. “You’re going to lose some people along the way but the ones we lost were worth losing. The true winners are here at this pub.”

Also there was comedian Charmian Hughes.

Last weekend, she had been at the Glastonbury Festival.

“So you got pissed-on last weekend AND this weekend,” I said.

“Glastonbury was very wet,” she admitted. “There was lightning over me but then it dried out. Right now, though, I have to do that thing that ladies have to do when they step out of their pants. My pants fell down. The elastic went. They were falling down all the way through the walk and I was clutching them. They’re now in my bag.”

“You MCed the Comedy Tent at Glastonbury?” I asked, trying to change the subject.

“Yes,” said Charmian, taking the pants out of her handbag. “First time. It was fantastic. Great fun.”

“Isn’t it difficult because they’re all pissed or drugged out of their minds?” I asked.

“I was very well prepared,” Charmian told me, examining her pants. “I made a mathematical chart of all my jokes and put them into statistical families so that, if the backstage people said Only do one minute, I could do the first minute of a joke and then, if they whispered behind the flaps: Keep going! Keep going! The next act isn’t ready! I could keep going on that same subject by accessing the other jokes within that family. They told me: We’ve never had anybody with such amazing time-keeping… and you were quite funny as well. So that was a relief.”

“And how were the toilets?” I asked.

“Lovely,” said Charmian. “There’s only a problem when they try to put proper toilets in.” 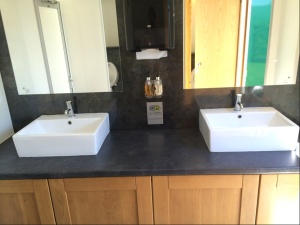 “Ah, you should go to John Lewis in Oxford Street,” I told her, “To celebrate their 150 years, you can get up into their roof garden where they have artificial turf and this week they were watching Wimbledon on giant TV screens. They have the most luxurious portaloos I have ever seen.”

“My wisdom tooth is coming through,” said Charmian, ignoring me, “and I am welcoming it because I need all the teeth I can get but, as it came through at Glastonbury, it was catching on my gum, making my mouth too full of teeth, so I got this speech impediment like a lisp and I thought everybody else might think I was on rugs.”

I have listened to the recording several times now. She said “Rugs.”

“I have got to go,” Charmian said, “because I’ve now got hypothermia and it’s fiddled with my mind. I can’t feel my feet.”

There is a video on YouTube of The Relatives and the Dulwich Ukulele Club singing the Nunhead Beats the Bounds theme tune on Lewis Schaffer’s weekly radio show.

The chorus, if you should feel inspired to sing along is: