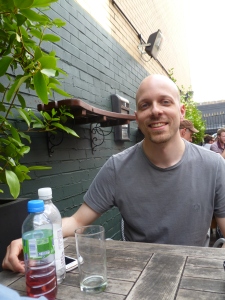 Luca Cupani: a man not likely to lose his bottle

London-based Italian comic Giacinto Palmieri told me I should meet Luca Cupani from Bologna. So I did. Yesterday afternoon. With Giacinto.

Luca moved to London at the end of January this year to be a comedian.

“I would like to also be an actor, but it’s not that easy because of my accent and because, when they look for an Italian actor, they want someone who looks like an Italian, not like me. At Twickenham in November, I did an open audition for the new Star Wars movie…”

“I thought,” said Luca, “if they chose Chewbacca and Yoda, they can’t be too fussy about looks. I queued at Twickenham Studios at five in the morning along with 15,000 other people for six hours and the audition was just entering a blue tent and exiting the other side in three seconds.”

“Why couldn’t they just look at pictures?” Giacinto asked him.

“I dunno,” shrugged Luca. “They just wanted to meet someone. But I thought: The Comedy Store can’t be worse than this.” 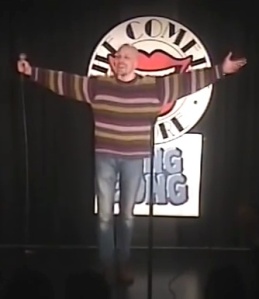 “There were about 400 people in the audience,” he replied, “and they were not nice and, listening to the comics on before me, I didn’t get half of the jokes because of the cultural references.

“When it was my turn in the second half, maybe I was helped because they were a little… I wouldn’t say drunk, but they…”

“I think you can say drunk,” I told him.

“Well for some reason,” said Luca, “they liked me. I started talking about everything. I would have sold my mother to stay on stage. I did not sell her, but I stayed on stage and I won the show, the King Gong. It was my first time and I was so scared and I survived and won.

“So they gave me another five minute spot in June that I did and that went not so bad. At the end the owner, Don Ward, told me I have funny bones. I had to look it up in the Urban Dictionary. He told me to keep doing it and I would have another spot in November but just five minutes again because he told me: Your English is not that good.”

Luca’s first performance at the Comedy Store is on YouTube.

“I was improvising,” explained Luca. “I can’t write jokes in English so, if I want to find new material, I have to go on stage. In my room, I can’t find any joke. I need to be on stage and under pressure or under fear and I start saying something funny and people laugh and that gives me energy.”

“I find it difficult to translate the jokes I say in Italian into English,” explained Luca, “and it is different the things that trigger laughter here. In Britain, I realised there are some subjects or topics you should not mention: if you talk about things like cancer.”

“Are cancer jokes OK in Italy?” I asked.

“Yes,” said Luca. “You can make a joke about anything.”

Giacinto disagreed: “Romina Puma (organiser of Il Puma Londinese Lab) always tells me it’s easier for her to talk about disability in London than it is in Italy. She tells me people here are more ready to mix comedy and tragedy. I don’t know the Italian comedy scene now. But it is true there is more sensitivity here about racism and sexism.” 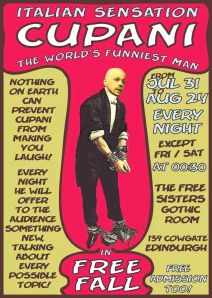 “I did some jokes about cancer at the Comedy Store,” Luca added. “They laughed. But, if you talk to other comedians, they say: Don’t say this; don’t say that.”

“You can,” I said, “make a joke about anything if you deliver it in the right way. What can you not say in Italy?”

“In Italy,” said Luca, “we don’t have something like stand-up comedy in the Anglo-Saxon way. It’s more like you have to portray a character maybe like Commedia dell’arte… You have to be the lazy postman or the rich businessman. You create this character like a stereotype and you do some jokes around this. In Britain, you are yourself and you talk about your vision of the world.

“But,” I asked, “in Italy you can talk about North Africans arriving in Sicily by boat?”

“Though not on stage now,” said Giacinto. “That’s more in the pubs. The butt of the jokes in Italy are the Carabinieri – the military police.”

“And,” said Giacinto, “in Italy they are about the Carabinieri. Yes.”

“So not about people from other areas?” I asked.

“Italian history,” said Giacinto, “is so localistic. People were for centuries closed inside very small communities. Probably the Carabinieri used to be from the South traditionally so maybe there is a bit of anti…”

“People from the South,” said Luca, “tend to represent people from the North as stubborn and Yes, they work but they’re not that smart. The South portrays themselves as We know how to live. We are smarter, brighter. In the North they are slow.”

“Yes,” said Luca. “People in the North think they are like the Germans and are perfect, but they are not. Part of my family is from Sicily.”

“I have got myself off-subject,” I said. “Back to you, Luca. You are performing at the Edinburgh Fringe next month. You’ve never been to the Fringe before. Never been to Scotland before. And it’s an hour-long improvised show…”

“What ,” Giacinto asked me, “did you think of the preview of my Wagner show the other week?”

“I thought it was very good,” I said. “I didn’t have any misgivings about it because I thought: If the worst comes to the worst, there will be talk of women with horns on their heads.” 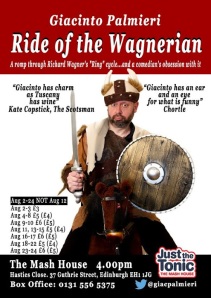 “Wagner,” suggested Luca, “helps you connect with your inner hero.”

“You are my personal hero,” said Giacinto, “because what you are doing – improvising an hour show – is crazy.”

“I would do a show about my sex life,” said Luca, “but basically nothing happens. I dated a woman who works in a bank and she just asked me about the Mafia for three or four hours.”

“One day,” said Giacinto, “I am going to do a show called All The Women Who Didn’t Sleep With Me (Abridged). The unabridged version would be too long.”

“Your Wagner show,” I told Giacinto, “is actually ideal for the Fringe because it is a show performed by an enthusiast. In Edinburgh, the big thing is to latch on to a subject, then make it personal in some way.

“If the punters are sensible,” I continued, “even if they don’t give a shit about Wagner, they’ll think: Oh! Women with horns and a man with a sense of humour! That’s worth seeing! If someone’s an enthusiast, you know he’s going to be excited about the subject and will try everything to enthuse you and the hour is going to be interesting and, in this case, funny.”

“I know you don’t do reviews,” said Giacinto, “but, if you can manage to squeeze these words into your blog…”

“Did I not mention it before?” I asked.

“No,” said Giacinto, “you never mentioned my preview.”

“But I’m still going to invite you to parties, don’t worry,” Giacinto told me.

“John,” explained Giacinto, “says he doesn’t do reviews because he wants to be invited to parties by comedians.”

“You might have just managed to get into my blog,” I told him.

There is an award-winning short film featuring Luca Cupani on YouTube. (It is in Italian)