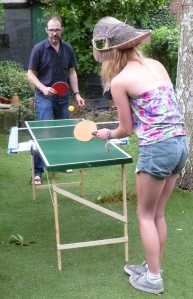 At the weekend, I went to see Pull The Other One club owners Martin and Vivienne Soan. Their daughters appeared to be wearing lampshades. This sounds rather odd but actually looked rather trendy.

More to the point, there was a man who shall be nameless who is thinking of starting a new comedy magazine – in print, not online. This is interesting, if foolhardy. Comedy magazines in print have come and gone – Mustard, The Fix, Heckler.

At the weekend, Martin had a February 1992 edition of Heckler.

There was a piece about him inside.

At the slim risk of getting sued for copyright infringement by the long-dead magazine, this is what it says: 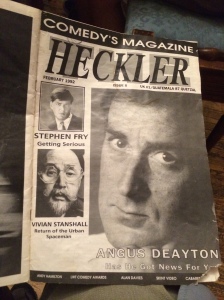 From Thursday February 6th the planes will align in an Aspect and House that has never before been witnessed by Mankind. This is the reason that Time Out Award-Winner Martin Soan has decided to open a brand new club which will run for eight weeks on Thursday evenings. Mr Soan assures us that for this period the aforementioned cosmic alliance favours great spiritual and paranormal activity. The chosen venue for this venture is The Comedy Cafe which it just so happens is on the very site where two lay lines cross: one from Mecca to Glastonbury and the other from the Holy Isle to the Lost City of Atlantis.

The whole venue is to be given over to the power of the supernatural with no limit to the amount of ghostliness and weird occurrences that will take place. Soan’s previous ventures have always been highly innovative and genuinely original in concept and practice. This has the makings of continuing that tradition with features like ‘This Is Your Plant’ – a spoof of This Is Your Life where the life of the house plant is examined. Also to be included is the Mind Fantasies Machine, The Incredible Floating Head and The Worst Double Act In The World.

This is highly recommended before it has begun because Soan’s ingenuity is well worth an evening of anyone’s time.

Below are Lewis Schaffer’s (so far) two press releases for his upcoming Edinburgh Fringe comedy show Success Is Not An Option. 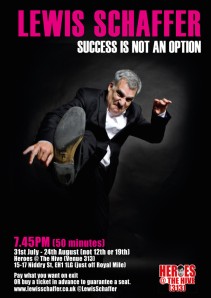 My Edinburgh Festival Fringe show for 2014 is called “Success Is Not An Option”. My show will not be a success because:

Under the Heroes of the Fringe “Pay What You Want” model, punters can pay £5 for tickets in advance or come in free at the door which makes absolutely no sense. As of today, I have sold nine tickets. Nine.

2. Most reviewers don’t like to go to free shows because they cannot be guaranteed a seat, and that can mess up their viewing schedule. And they don’t get something that regular people are paying for for nothing, which is the whole point of being a reviewer.

3. This is my seventh consecutive year at the Fringe and I have gained zero traction. 22 years in comedy and I am still doing these poncy shows in dingy subterranean bars.

4. There is always some American comic nobody has ever heard of riding into town, selling out every night and then leaving the country once the festival is over. Leaving is always sexy. My ex used to tell me “You used to chase me!” and I’d say, “You used to run.” I’ve stopped running. I’m not leaving the UK. I am stuck here with a knackered act, two kids, and nobody chasing me.

5. You could have seen me in London where I do a weekly show at the Leicester Square Theatre and two free shows a week at The Rancho Grill at any point over the past five years, but you haven’t, and I know you haven’t, so you’re not going to make me a success in Edinburgh either.

7. I have waited until three weeks before the festival to send out a press release, and have no promotional budget to pay a PR to tell me that this level of self-flagellation in a press release is a terrible idea.

Be prepared. Lewis Schaffer isn’t.  An hour of your life you’ll never get back. A lifetime of his completely wasted. 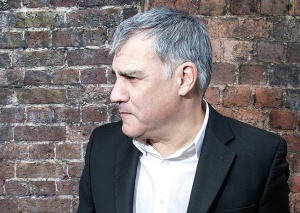 The frolic-filled funster success factory that is Lewis Schaffer

My last press release was “nothing short of genius” according to Simmy Richman in the Independent on Sunday. Read his piece here.

Here are four more reasons why my show “Success Is Not An Option” will not be a success.

9. Most people, upon having a piece of publicity material described as “genius” by a national newspaper, would then try to follow it up with something bigger, better and totally fresh.

10. My poster doesn’t have any quotes or stars from reviewers.

You, from the The Times, The Guardian, and The Telegraph, have never reviewed any of my shows.

My biggest supporter in the press, Kate Copstick of The Scotsman, has only ever given me four stars even though we had the closest thing to a sexual interaction that I, as a crumbling 57-year-old man, am capable of having with another human being. You can read about that on John Fleming’s blog here and then give me five stars to save yourself from the same fate.

11. I decided against using Stewart Lee’s quote about me – “Naked hostility and self-loathing” – or Daniel Kitson’s – “The logical conclusion of all stand-up comedy” – or Marc Maron’s – “Very bitter and weird” and “Not that good” – because name-dropping is the lowest form of self-promotion and I value my integrity.

12. The Relatives wrote a song about my going to Edinburgh and said the Number One reason I would fall at the Fringe was that I was “jerk”. They performed the song on my radio show Nunhead American Radio with Lewis Schaffer, broadcast on Resonance 104.4FM. Watch here – it is brilliant.

Here are the lyrics to sing along with:

Success is not an option.

Lewis was writing his Edinburgh show
Knew in his heart no one would go
Hasn’t got a bob for publicity, no
Only got five quid to blow
Success is not an option

Well, what’s gonna happen to his radio show?
Its been five years but nobody knows
The team of five are ready to go
But does he ever listen?
The answer’s “no”
Success is not an option

Thank you for reading this far.  If you tell me you have read to the end I will buy you drink up in Edinburgh. If you are alcoholic, I will spend five minutes commiserating with you over how long the Ramadan fast is this year.