Ian Hinchliffe (right) with Tony Green, in London in 1990

Performance artist Ian Hinchliffe drowned while fishing on a lake in Arkansas on 3rd December 2010.

In a blog earlier this month, I chatted to writer/performer Mark Kelly. We were both surprised that the British Council used to send the almost-always-utterly-drunk Hinchliffe abroad as an example of British culture.

That reminded Anna Smith, this blog’s occasional Canadian correspondent, about Ian Hichcliffe’s visit to Toronto around 1985/1986.

“It was a show by The Matchbox Purveyors (in this case Ian Hinchliffe and Kevin O’Connor),” Anna remembers. “It was at The Rivoli on Queen Street and was what the British Council was fuelling… a fascinating display of filth and abuse.

“For the set, Ian had strung a clothesline across the stage and hung LP records from it which he lit with a blue light – he was very particular about his lighting.

“The show opened with Kevin O’Connor (who was also a painter) tied to a chair, holding a full egg carton, with a sack over his head. Hinchliffe came out cheerful, dressed in light trousers, a red and blue vest, black spectacles, a white bowler hat, pushing an archaic pram… greeting and shaking hands with audience members. Of course, before long, he was undressing and staggering around smeared with egg and mud, a fur stole tied horribly around his waist.

“The show had not been properly advertised, so the audience was a small collection of British jazz musicians and a group of artsy cinema-loving intellectuals.

“Earlier that night, I had been out on Queen Street, imploring passers-by not to miss the show. Nobody was interested. They said: We don’t care. We don’t need British comedy. We have our own Canadian comedians. And I thought: You idiots! You don’t have this. Nobody has this.

“Hinchliffe had his own language and it was often impossible to follow. The guy who bought London Bridge and put it in Arizona tried to hire Ian as a permanent fixture in the pub that they put beside it. They offered him a ton of money. I asked: Why didn’t you do it? He answered What would I have done… there… in a desert….? and, of course, he was right.

“He often mentioned ‘Tut Morris’ which I assumed was a car. He would say things like I left Tut Morris in a field… or I owe Tut Morris a payment… and I’ve got to get back to me Morris. Then I realized he was referring to a woman.

“He had been a laminator. Glue and alcohol. He was a jazz pianist. An amazing player.”

When I mentioned this to Ian’s old comedy friend Tony Green, he said:

“I wouldn’t have called him an amazing player. He could play a bit. But the problem with Ian was he had tiny hands and, when he spread his fingers for an octave span, the skin between the fingers would crack and there would usually be blood all over the keys.

“On one occasion, he was playing a white piano in a pub and there was blood all over the keys, pouring down the piano. You’ve never seen anything like it. Like something out of a horror film. When he did an octave span, the skin would just crack open and start bleeding.”

“And,” I said, “he had a habit of bleeding from his mouth when he ate glass.” 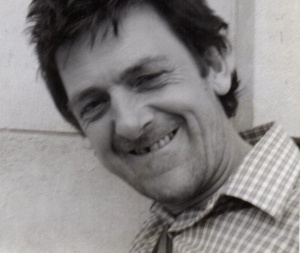 Ian Hinchliffe in the 1980s (Photograph by Anna Smith)

“Oh yes,” said Tony, “he was always eating glass, wasn’t he? Mind you, he came a cropper at one of Malcolm Hardee’s gigs when he tried it. He actually did two gigs for Malcolm. The first one was OK and Malcolm thought it was weird enough to book him again. The second one didn’t work too well. When he was good, he could be inspiring, but that was maybe only one in twenty gigs because he got so pissed.

“He had to end his act by eating a beer glass – obviously. So he’s on stage trying to bite the edge off the pint glass and Malcolm said to me: He can’t fuckin’ do it. Has he got new false teeth or something? I said: Give him a few more minutes.

“Eventually Malcolm goes on stage: Here we are, then. Ian Hinchliffe. And Ian’s still on stage trying to bite a chunk out of the beer glass.

“I told him: That’s it, Ian. Your career’s had it. What are you going to do now?

“I had seen him do it lots of times before. On one occasion, he was being heckled, munched the glass down to the handle and said to the bloke: You finish the fookin’ ‘andle!

“God knows what his insides must have been like.

“Stabbed it into his own face. Yes. He had a little scar. He told me: I didn’t twist it, like, so it was no big thing.“