Edinburgh Fringe: Picking up girls and boys + a court case on werewolf erotica 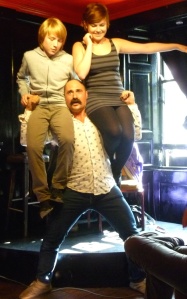 Adam Taffler at the Grouchy Club

Yesterday in the Grouchy Club show at the Edinburgh Fringe, showman Adam Taffler picked up a girl. Literally. He does it all the time.

One on each shoulder.

Afterwards, he took me outside where two girls wearing snorkels and flippers were in a restaurant opposite, eating noodles from boxes.

“I’ve lost my wedding dress,” one of them told me. 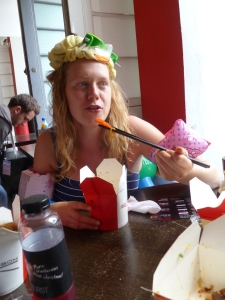 This scuba girl has lost her wedding dress

“I was walking along and it fell off my back pack in London,” she told me.

“I’ve got the bridesmaid dress,” said the other scuba girl. “So we’re going to have a bridesmaid and no bride.”

“And no husband,” added the first scuba girl.

“Is this a real wedding?” I asked.

“I’m looking for a husband,” said the first scuba girl. We will find him.”

“It was going to be Garry,” said the second scuba girl, “but he ran away.”

“Does this link up to scuba diving in any way?” I asked.

“We are giving training in how to swim,” said the second scuba girl. 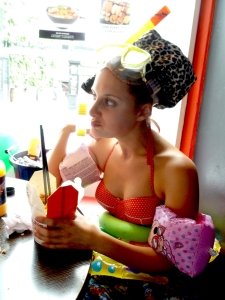 “You’ve got to be really ladylike,” said the first scuba girl.

“We found haggis today,” said the first scuba girl, “in a tin. We didn’t eat it.”

“Two naked people standing on the Royal Mile completely covered in flyers,” said Adam. “The more people come and take flyers, the more naked they get.” 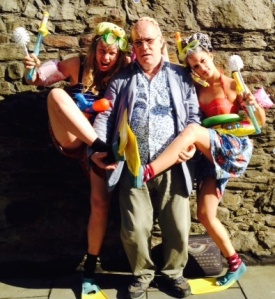 Then he took me outside and photographed me against a wall with the two scuba girls.

As the girls flip-flopped their way across the road in their flippers, someone asked: “Are you promoting a show?”

“But are you promoting a show?”

“Are you in any show up here?”

At the Grouchy Club itself, Mathilda Gregory had told us about writing werewolf erotica. 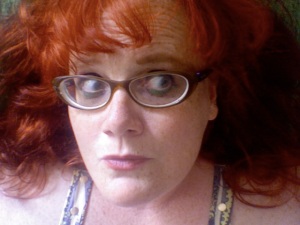 “Why did you stop performing comedy?” I asked.

“It was a lot of hard work,” explained Mathilda. “You had to physically go to a place. You thought: Oh God! I’ve got to go to Birmingham!”

“It was specifically Birmingham that put you off?” I asked.

“Yes,” said Mathilda. “Or maybe it was the person I was sharing a car with.”

“So you took up writing instead…” I said.

“I’ve written six novels,” Mathilda replied. “Three of them are about werewolves.”

“What are the other three about?” I asked. 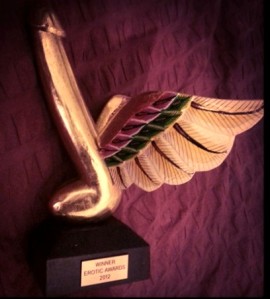 “Yes,” said Mathilda. “But my wings have fallen off.”

“How did you get into this?” I asked.

“My publisher,” explained Mathilda, “told me: We’re starting a line in paranormal erotica. There’s a huge market. In America, this is going to do really well.”

“Is it sex between consenting werewolves?” asked Copstick.

“There are three books,” said Mathilda. “We get into all kinds of things.”

“Apparently,” said Copstick, “wolves are much, much better at sex than men are.”

“I can believe that,” said Mathilda. “I’ve obviously done the research now. Vampires are not really very virile.” 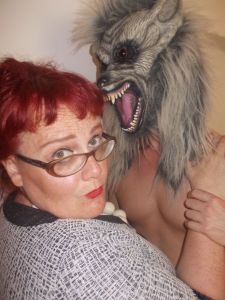 Mathilda Gregory and one of her close friends

“I think everybody’s fucked a vampire by now,” said Copstick.

“You have a show about your werewolf books at the Fringe this year,” I prompted. “Werewolf Erotica She Wrote.”

“Well,” she said, “one of my books had been the subject of a court case. In 2013 a male prisoner in California, who was imprisoned for the attempted murder of a member of the Mexican Mafia, took his prison to court because they wouldn’t allow him to have one of my werewolf novels in prison. There was a two-year long court case where they read my book and tried to assess whether I had enough literary merit to be allowed in prison.

“Were they objecting to the sex?” I asked. “Or to the werewolves?” 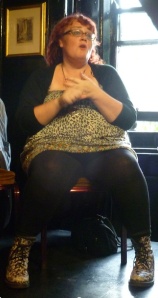 Mathilda at the Grouchy Club

“They said it was inter-laced with pornography and that it incited violence. But the court found against them. So legally I have literary merit. There’s a lovely quote from an author called Peter Orner who they called as an expert witness. It says something like Pelican Bay is one of the most violent prisons in California. It has a lot of serious problems. An inmate reading books about werewolves having sex is really not a concern.

“So, legally, I have a judgment that my book has literary merit and is ‘perhaps’ less than Shakespearean. I like the fact they used the word ‘perhaps’ – so there is some legal doubt as to whether or not I am better than Shakespeare.”

2 responses to “Edinburgh Fringe: Picking up girls and boys + a court case on werewolf erotica”