Edinburgh Fringe: Networking with the media + a comic is threatened with rape

Seen and heard at the increasingly prestigious Grouchy Club

Yesterday afternoon at the increasingly prestigious Grouchy Club, I said:

“Performers at the Edinburgh Fringe get worried about the number of bums on seats and I don’t think performers should come to the Fringe thinking about audiences; they should come thinking about the media. If you get a full house, the word-of-mouth from that is not going to let you fill the O2 Arena. But, if you get a review in the Guardian or spotted by a TV producer that might get you part of the way. It’s all about self-promotion, not bums-on-seats.”

Comedian Matt Price had a question about ‘networking’ at the Fringe.

“How,” he asked, “do you do it without looking like a dick?”

“Oh, you can’t do it without looking like a dick,” said doyenne of comedy critics Kate Copstick. “one of the things you need to know about most of the people who are doing most of the networking – I would say 85% of the media people who are up here can do nothing for you. They are Muppets and low-grade grist to the media mill.

“They could go back and say: Oh! I saw this amAZing guy. He should have a TV series! and, even if they say that, it can only go so high and someone will say Who’s he with? or Is he a black lesbian? – They have quota as for everything and they are in thrall to a lot of the big managements.

“Everybody is terrified to fail in television, because you don’t get that many chances. There are a very small number of people who make the decisions and there’s a awful lot of people who are pretending they make the decisions. They generally – I say maybe 85% – have no imagination or creativity whatsoever. And, unless you are like something that is already out there…”

“But,” said Matt, “we’re not inspired, as comedians and performers, by following convention. There must be a way of doing it by being progressively better. I am basically just a fat bloke from Cornwall whose missus is probably more talented than he is.”

“The important thing,” said Copstick, “is that you are a fat bloke from Cornwall who did a brilliant show last year and so, in people’s minds, you’re a terrific comic and I’m interested to see what you’re doing this year.

“If you really wanted to whore yourself around to the media circus, you could style yourself as ‘The new Johnny Vegas’. You’re big, you could be all over the place, you could drink too much…

“The networking that is important at the Fringe is networking with other comics, with people who book live gigs and with other creative people. The leap between performing live in a tiny room on the Fringe and your own series on the telly is exactly the same size as it ever has been. But there are now thousands of pointless people with media badges swanning around getting freebies and pretending they’re important.”

Matt Price, though, had another reason for coming to The Grouchy Club yesterday.

“I didn’t really want to come here and speak to you,” he said, “but I thought Oh, it’s raining and it’s been on my mind and I figured Well, if I can talk about this to anyone, it’s the fearsome Kate Copstick.

“Something happened yesterday: an incident that really shook me. I wrote a blog about it but then I thought I’m not going to put it online because, if I do, people might say Oh, Matt Price is just playing the PR game. 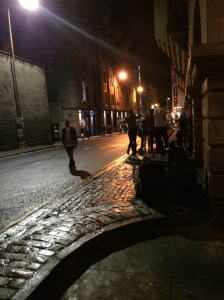 Cowgate, near where it happened, last night

“I was walking along Cowgate yesterday. It was about 11.30 at night near (a particular nightclub). There were two bouncers in the doorway and this big guy and I know when people are coked-up. When you’re a comedian, you know about that. And this guy said something to me and I said: Sorry mate?

“He said: I want your phone number. Kiss me.

“He looked quite aggressive and then he said: Shake my hand.

I thought: OK, he’s made some kind of sexual advance, but I can still shake his hand because I have no problem with my sexuality and I’ll just walk on my way. But he grabbed my hand and nearly ripped my arm off and then said: I’ll fuckin’ rape you, you cunt! I bet you’d like my cock up your arse, you bastard!

“I said: No, mate, I really wouldn’t. But thankyou. And I walked away.

“The bouncers obviously heard all this. The guy was in the doorway. I thought: Are you a thug? Are you a criminal?

“I phoned my missus and she was upset and I went back to my Edinburgh flat and Claire (Smith, the Scotsman journalist who rents him a room during the Fringe) gave me a whisky and I went to bed.

“I didn’t have any adrenaline in me until today and what really got me was not the incident but when Claire said: Welcome to the sisterhood. This is what women have had to put up with over the years.”

One response to “Edinburgh Fringe: Networking with the media + a comic is threatened with rape”