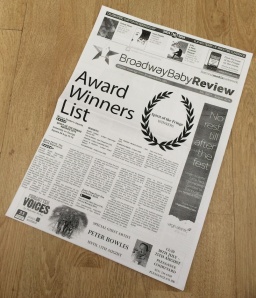 My left shoulder is in middling agony if I move it. It is comedian Arthur Smith’s fault. More about that later.

This morning, I booked the Ballroom of The Counting House in Edinburgh on Friday 28th August next year from 11.00pm to 1.00am… for the increasingly prestigious annual Malcolm Hardee Comedy Awards Show. Next year is the tenth anniversary of the death by drowning of Malcolm, the godfather of British Alternative Comedy.

He was known, among many things, for his outrageous publicity stunts at the Edinburgh Fringe.

Yesterday in Edinburgh, it was good to see a special Broadway Baby review sheet about Fringe award winners.

Notable was Barry Ferns, who was listed on the front and who got a 6-star front page review for his show The Barry Experience. There was also a large photo of Barry on the back of the sheet, standing atop Arthur’s Seat. Also on the back sheet were reviews of sundry Fringe shows including:

You should be aware that, last year, Barry won the increasingly prestigious Malcolm Hardee Cunning Stunt Award for a series of stunts including producing and distributing fake versions of Broadway Baby.

At The Grouchy Club, I was an innocent bystander to sex talk

This was followed by me being part of an alleged audience who were going to repeatedly sing the words “Neil Young” in a raucous way for a forthcoming music album. Alas, it never happened and, instead, Malcolm Hardee Cunning Stunt nominee Mark Dean Quinn appeared performing a one-hour act (possibly inspired by Andy Kaufman) in which he said very little but stared a lot at the audience.

It also involved (apparently by osmosis) the audience blowing up balloons to create male-genitalia-like hats. This went well until one young man was encouraged by his chum to get up out of his seat and immediately fell unconscious in a faint onto the floor.

He was tall, thin, pale-skinned and ginger haired. He had been previously blowing up a balloon but, at the time of his fall, was not. He was revived and Mark Dean Quinn quickly retrieved the balloons from his audience and changed the direction of his show.

If you can call it a show. It depends on your definition.

I certainly enjoyed it.

At any rate, all the donations received at the end of the show are now going to be given to an asthma charity.

It was a day of falling-downs and medical problems. 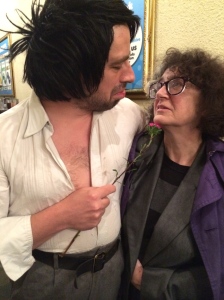 Later, I met up with the still physically and possibly mentally damaged Kate Copstick.

She had a hip replacement a couple of months ago (uninsured) after she fell off the platform on which her slum house stands in Kenya – and broke her elbow about a week ago after being accidentally bowled over by a couple of drunk gents in an Edinburgh street. She is still wearing a sling and goes “Ouch!” on a distractingly regular basis.

She and I were both in the basement of the Tron pub last night to see comic music act Wilfredo record his next album. References to Copstick seemed to pepper the show, the audience (heavily made-up of comics) adored the great man himself and I felt lucky to escape without Wilfredo’s spittle speckling me.

Afterwards, Wilfredo’s godfather Matt Roper told me: “I have to hear it back before I decide whether it will be released as an album. If it works, we’ll get it out by November.”

Which brings us to me lying face-down in the Royal Mile at about 2.30am this morning.

Arthur Smith was doing his annual free Alternative Tour of the Royal Mile last night from 2.00am which I guess attracted 50-80 people. That is a lot when you are one crowded bundle of people rolling down the Royal Mile following a man with surreality on his mind. 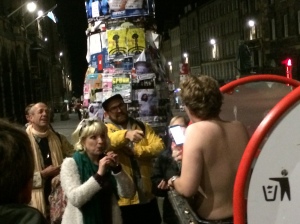 There was a lack of the total nudity and urination which characterised his event in the later years of last century, but it still involved various pranks such as Arthur’s partner Beth doing the splits, Wally (as in Where’s Wally?) being chased out of his hiding place and legging it off up the Royal Mile, a man being persuaded to climb into a rubbish bin wearing only his pants, the assembled throng singing Jerusalem with obscene lyrics to bemused customers at a pizza stand, constant verbal attacks on the integrity of a local French restaurant and singing a song involving the word ‘cunt’ over the body of an apparently dead man on the pavement. 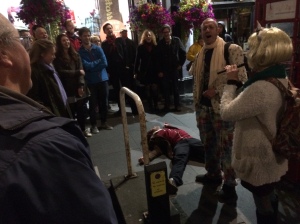 At one point, shortly after singing the song involving the word ‘cunt’ over an apparently dead man lying on the pavement (one of Arthur’s many pre-arranged stunts),  I tripped and fell flat on my front on the pavement (no arms out, just a straight fall onto my front). People just ignored this for a brief moment and looked at me, presumably thinking it was another stunt. But then I was helped up. This getting-up worried me slightly because, as I went down, a shooting pain similar to cramp had shot up my left leg. Fortunately, though, I was OK.

Until this morning, when I found I had searing, shooting pain if I tried to move my left shoulder. The shoulder which never mended properly after being smashed when I got hit by a truck in 1991.

There is nothing broken, as far as I know. Presumably it is just bruised muscle.

But it makes me think Copstick has a point.

I was sober when I fell.

I do not drink, really, except at funerals and marriages, when it would seem rude not to.

If you are drunk, falling is less dangerous.

I think perhaps I should start to drink.