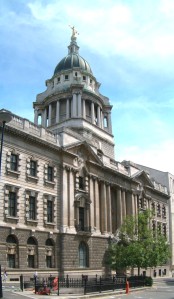 The Central Criminal Court of England & Wales at the Old Bailey

A week ago, I posted a blog about a court case.

It was in a minor court.

I know someone else who, a few years ago, was a juror at the Old Bailey in London – the Central Criminal Court of England & Wales.

He kept a diary.

What follows is extracted from it.

Two weeks is the legal requirement for jury service but, as the selection of a jury is random and some cases may take longer than two weeks, sometimes thirty or more potential jurors can be selected by computer and taken to the court room.

The judge tells us the case is likely to run a month and 20 names will be called at random. If our name is called we are to approach the bench and explain to him if we have a problem with the duration of the case.

First up the lively fellow I had chatted with outside. “My Lord,” he says, “I am a member of the bar. I have my own cases to prepare. I can serve 2 weeks but longer may be a problem.” The Judge says in not so many words that, as a member of the legal profession, he knows how the system works. His excuse is not accepted.

I am not chosen.

Afterwards, we prospective jurors have a coffee table discussion. Eventually we get round to ‘What do you do?‘. One of our number says he can’t tell us; it’s top secret and he has to keep handing notes to various judges who then mysteriously dismiss him. We play guess his occupation. He won’t play ball. (I think he may be a spy.)

M’Lud calls for anyone with a problem to come forward. From somewhere behind me appears the ‘spy’, clutching his note which he hands to a court clerk to take to His Honour. We all watch the Judge with interest as he reads the note.

“Yes,” he says, “I think I need to show the barristers this.” Up they step to read it. “I am satisfied that this gentleman should not be considered for this jury. Do you agree?” he says to the barristers. “Yes M’Lud.” The spy is dismissed and instructed to leave the court.

It is impossible to be a juror and disengage your emotions. Ours is a tragic story and we all, without exception, have become increasingly subdued as the story unfolds and, in one or two cases, quite upset.

I held a murder weapon wrapped in protective plastic, learned the difference between various spatters of blood and listened to the graphic details of the findings of the pathologist’s post mortem. CSI this isn’t.

One thing’s for sure, being on a jury is an education.

If one could forget that she was talking about an actual incident (which I couldn’t) the forensic scientist from the Home Office was fascinating. She explained just exactly what DNA is and how they can form their deductions from it. She then guided us through our file of photographs and explained each blood spatter. She can tell which is impact blood and which is expirated blood.

The detective came with the transcript of her first major interview after the defendant had been charged. She read her part out and the junior prosecution barrister read all the others. This was quite lengthy and took us up to lunch time. Quite frankly, I have never heard a script in a TV drama that has come anywhere close.

The afternoon was taken up with the rest of the police transcript and then came the Home Office pathologist. He gave a detailed description of the post mortem, referring us to our graphic drawings of the deceased and then explained his findings. It wasn’t pleasant.

His Honour called it a day after that. It had been heavy going and our mood was sombre. One of the younger jurors was in tears.

I badly needed a drink and I was due to meet two friends for dinner. I desperately wanted to ‘download’ the case but I knew this wasn’t allowed. On the other hand I didn’t want to just go home. So I head out for the evening and find I am not the best company.

Two psychiatrists today. One for the prosecution and one for the defence. They have both been involved at different stages of the story and ultimately they both agree. We are stood down for a two hour lunch break – the two opposing barristers want to have legal discussion. We think there is something in the air.

Back in Jury Assembly we all avidly discuss the case amongst ourselves. This being Friday, with the week’s cases in full swing, there are groups of jurors sticking together everywhere in deep discussion.

Wander out for a breath of fresh air. Camera crews everywhere. Someone says ‘the shoe bomber’ is about to be sentenced. After lunch, the defence barrister begins his case. The second psychiatrist is called. He takes us up to 3.00pm and once again M’Lud calls it a day. He addresses the jury, telling us to have a nice weekend and reports that the weather is going to be sunny. He then asks us to put the case out of our minds until Monday.

It’s all over. A strange feeling of deflation. My fellow jurors and I have lived this case for the last few days – someone else’s life, the minutiae of someone else’s tragedy. And, when it came to it, we weren’t prepared for the sudden turn of events.

“Members of the Jury,” he says, “the prosecution and defence and I have been speaking since we saw you last and they have both put it to me that this charge should be one of manslaughter. I agree with them and therefore I propose to change the charge. I understand that the defendant is prepared to plead guilty to the charge of manslaughter and, having heard the circumstances of the case, I am satisfied that this is the appropriate charge and plea.”

Or words to that effect. I can sense that we are all relieved. From day one we have wondered why ours is a case of murder.

Next the formality. The Clerk of Court stands and asks our defendant to rise. Our defendant is formally charged with manslaughter and is asked how he pleads.

As we now have a changed charge and a guilty plea there is no need for us to deliberate. But we were set the task of trying the case and must agree with the events that have taken place. The Judge formally requests the juror in seat 1 to stand and asks if we agree with the charge and the plea. On behalf of all of us she whispers: “Yes”.

She knows we all feel the same – we’ve discussed it often enough in Jury Assembly.

And that is our duty done.

As the defence had not had a chance to conclude their case, His Honour gives the defence barrister the floor to speak. And my, how he does. An impassioned speech. Questioning how and why it had ever come to a charge of murder.

A veiled criticism of the Crown Prosecution Service that had refused to accept a guilty plea to manslaughter to begin with, which would have negated the need for a trial. No criticism of our prosecution counsel. He was just doing his job. It had become apparent to us from the way he presented the Crown’s case that he was sympathetic. No rottweiler here.

The judge listened and commented that, despite all the defence had said, the laying out of the tragedy before the court had led everyone to conclude that this was the right outcome. Perhaps this had been for the best.

And so to M’Lud’s summing up.

He talked of the tragic circumstances of the defendant’s life that had led him to take another’s. He spoke of the family who must bear some of the responsibility, the shame and the blame. But, he said, the fact remained that to take a life is unlawful and a custodial sentence was the appropriate punishment. He was incredibly fair.

Four years. With time already served in custody and time off for good behaviour, he will be out in 18 months. What happens to him then I do not know…

So here was our case. A case where one man was responsible for another man’s death. A fact he did not deny and had not run from. A charge of murder. A plea of Not Guilty.

Here is what I have learned. Behind every murder is someone’s story.

Here was a story of a family where violence was commonplace. Of a weaker member of the family who didn’t fight back. Then one day he did. And in one almost inevitable moment he stabbed his brother. He got 4 years. It could have been life. Whichever way you look at it, it’s still a life sentence.

I have never seen such human despair. What must it be like to relive the moments that lead up to that one mad moment that turns your life? And to relive it in front of your family, your friends and twelve silent strangers sitting in judgement. We all saw the tears that wouldn’t stop flowing, the hands that covered ears, the head permanently bowed. Violence breeds violence it is said. The irony is our man was raised in a violent family culture but he had not been an aggressor. Until now. And, in all of this, Philip Larkin’s poem was never far from my mind: They fuck you up, your mum and dad.

After sentence is passed we file out. All of us subdued. Now, the mundane task of handing in our passes and papers. Time to say our goodbyes to eleven other people we hardly know, with whom we have shared an intensely emotional experience, and go back to our lives.

On the way out, two of us bump into our defence QC and his team. I ask him if he has become inured to tragedy – he must see it day after day. “No,” he said, “if you are human you don’t. And,” he said, “this was an unusual and particularly tragic case.”