Other people’s lives – Vancouver: 3rd best city in the world with Satan statue 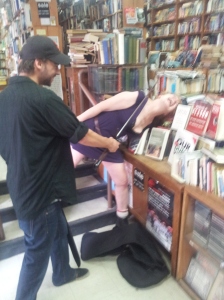 Anna Smith (right) has no explanation for this

Most had single photos attached.

One was of her in the Vancouver bookshop in which she works.

She was apparently being beheaded by a a man wielding a sword.

There was no explanation.

I have no explanation.

One of the e-mails had text.

The economy is booming, especially at the hotel across the street.

The Economist last month called Vancouver the third best city in the world to live in.

IF YOU DON’T LIKE IT HERE, MOVE TO MELBOURNE 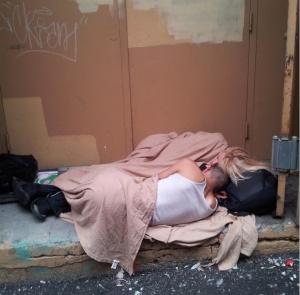 Anna’s caption: “Even the homeless people are photogenic…”

If it is such a world-class city, then why do all the restaurants close at ten o’ clock? Why is everybody extolling our reputation as “a universally renowned centre of tap dancing” –  but they react with shock when a beautiful, refreshing, silly, nine-foot sculpture of a gesticulating, bright red, well-hung Satan appears on a pedestal beside the main commuter train line to suburbia?

The rabid bats have not been heard from lately, but syphilis is still soaring… The school teachers are on strike, so there is a general atmosphere of gaiety, as the leaves twirl down.

An eight year old girl who lives in my building had time to practise her skateboard for a whole hour, while her aunts settled the next week’s child care arrangement.

Teenagers gather in relaxed stances outside the school fence, the girls with their hair brushed to painstaking perfection, lit up by the rich sunset light.

We live on a convergence of fault lines, where several tectonic plates are slowly sliding against each other.

Most people here do not know that the huge Fuji-like mountain to the south is a volcano. 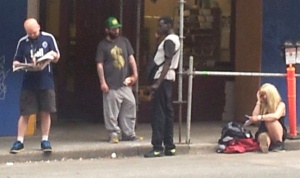 Some are aware that we are overdue for The Big One – a massive earthquake.

This coast has been called LotusLand for as long as long as I can remember, but Dylan Thomas called it “a handsome hellhole” and William Burroughs described Vancouver as “a paradise for topiary artists”.

Anna mentioned a “nine-foot sculpture of a well-hung Satan.”

This is a reference to a statue which was removed this week from a Vancouver park near the Grandview Highway because it was not officially commissioned by the city.

The statue was an anatomically-faithful figure of a red-skinned Satan, complete with horns and what the CTV News Channel reported was “a visibly prominent representation of a phallus.” They continued: “The statue holds one hand up in a devil-horn salute.”

Apparently passers-by first noticed the statue on Tuesday morning and it was visible to commuters on the SkyTrain route nearby.

No-one knows who ‘erected’ the statue and no-one has claimed responsibility for creating it.

2 responses to “Other people’s lives – Vancouver: 3rd best city in the world with Satan statue”