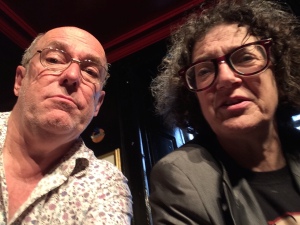 At last month’s Edinburgh Fringe, comedy critic Kate Copstick and I hosted the daily Grouchy Club. It will return at next year’s Fringe and we are currently looking into running monthly Grouchy Club events in London.

In the first Edinburgh show, I asked her about herself.

“You went to Glasgow University…” I said.

“No. That came to me naturally. There was no need to study. I wrote my final Honours paper – which was on Kelsen’s Pure Theory of Law – on a breakfast of two litres of Guinness. I was pretty much incapable of leaving the house without wrapping myself around something alcoholic – I mean a drink, not a person. I farted and belched my way through the exam and got a 2:1.”

“You wanted to be a Scottish lawyer?” I asked.

“Well,” explained Copstick, “I had seen Witness For The Prosecution at a very impressionable age and had this ridiculous idea that lawyers were there to help people. I was very, very naive and obviously had not met any lawyers. I saw myself as Gregory Peck in To Kill a Mockingbird mode. And also I was an appalling smartarse at school. I was unpopular. I was short, fat and ugly. The only thing that was any good about me was that I was clever.

“What clever people went on to do was Law or Medicine and, as my Highers were English, French, German, Latin and History, I was not going to be a doctor.

“The Law degree was good fun and I got to shag a lot of Jewish boys and really upset a lot of Jewish mothers. I had a boyfriend called Michael. Well, he and I were not ‘going out’. I wasn’t into relationships. I was more into just shagging randomly and frequently. Those were the days.

“Michael’s parents were quite rich and, for his 18th birthday, they bought him a Mini-Cooper car which they then locked in the garage because he took me out in it – a shiksa had soiled the seats.

“That was the first time I really understood prejudice. One Jewish guy invited me over to dinner and his mum and dad were there and I was put at the end of the table with the crockery and the cutlery for the goyim. It was like Unclean! Unclean!

“Michael – the guy with the Mini-Cooper – got me for my 21st birthday The Code of Jewish Law.”

“God loves us. God hates everyone else.” 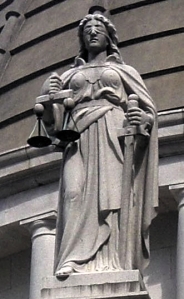 The legal system… is blind to justice

“Anyway,” I said. “You decided not to become a lawyer. Why?”

“I did quite enjoy it, except I did come to realise that it is just a big posh boys’ game. It is not even so much about the boys. It’s about the posh. An ordinary person is never going to win. The police are liars and bastards. The prosecution services are liars and bastards. Your best defence is a rich dad and posh accent. If you don’t look right and don’t sound right, you’re probably guilty.

“I sat in front of juries and listened to them talking because I was an Advocate at that point. I was the instructing solicitor. I heard them say things like: Aw, see that Mr Taylor? (Bill Taylor was a Defence Lawyer) He’s got such lovely blue eyes. See when he looks at you? Ya cannae help but agree wi’ him. That is not a fucking defence! But that was the kind of reasons they had. You think: This is all just fucked!

“The scariest people I ever met were the Glasgow Serious Crime Squad. They would have ‘fitted you up’ faster than a Chinese tailor. Just unbelievable!”

“The clue’s in the name,” I suggested. “The Serious Crime Squad. They commit serious crimes.”

“That’s absolutely true,” said Copstick, “but I just thought: Fuck this for a game of soldiers.”

‘Which years are these?” I asked.

“How long do you train to be a lawyer/liar?” I asked.

“So,” I said, “after being trained to lie for four years solid, you can only become either a lawyer or a politician, really.”

“After four years, you know nothing other than books,” said Copstick.

“So,” I said. “If you decide not to be a lawyer after four years, you’ve got no other career.”

“Well,” said Copstick, “what you do know is how to learn. It trains your brain like nothing else. It teaches you not to be frightened of words. If someone sends you a contract, read it. It’s not scary. It will basically just say the same thing over and over and over again to make you think it’s saying a lot of things. They could hide anything in there.”

“So basically,” I said, “all they teach you is how to encapsulate things quickly so you can speak about something you don’t understand and make it sound credible like a politician or a lawyer?”