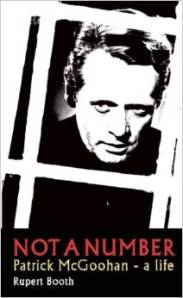 In this blog recently, I have been slagging-off ITV’s misbegotten attempted revival of Sunday Night at The London Palladium. I have a feeling it was made by people attempting to create a populist show based on some highly-researched viewer ‘demographic’ and that the producers are making a programme which they would not themselves watch – a virtual definition of dumbing down shows and looking down on audiences.

This came to mind because, last night, the admirably quirky Sohemian Society had a meeting about Patrick McGoohan and his cult series The Prisoner.

The speaker was Rupert Booth, who was plugging his 2011 book Not a Number: Patrick McGoohan, a Life but who, in an admirable demonstration of individuality, did not bring any copies to sell.

Lew Grade commissioned The Prisoner for ATV/ITV through his ITC Films company. 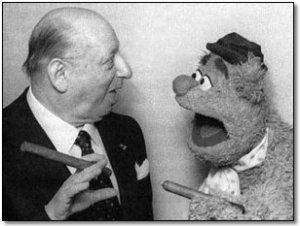 Lew Grade with Fozzy from his ATV series The Muppet Show

“I think it’s a misconception that Lew Grade was simply Mr Entertainment,” said Rupert Booth last night. “He made his money out of shows like Sunday Night at The London Palladium, but he would put an awful lot of money into pet projects, plays, operas – I think ATV broadcast the first colour live opera in Britain. He made Jesus of Nazareth. He always said: I should do something about the Bible; I’m Jewish!

“When The Prisoner was first pitched to him, with McGoohan waving his arms about and showing pictures of Portmeirion, Lew Grade ended up saying: I have no idea what you’re talking about, but here’s the money. Go away and make it. That may seem incredibly brave but, in a way, it wasn’t: McGoohan was a very bankable star. He had been Danger Man (another ITC/ATV series) and was, I think, at that point the highest-paid actor on British television. I don’t think Lew Grade saw Fall Out (The Prisoners’ final controversial episode) coming. But I don’t think Patrick McGoohan saw Fall Out coming.”

The way McGoohan remembered getting the OK from Lew Grade for The Prisoner was: “He got up, puffed on his cigar, marched around a little bit, then turned and said: Pat, you know, it’s so crazy it might work.”

There is a YouTube clip in which McGoohan talks about Grade.

In the audience at the Sohemian Society last night was someone who had worked at ATV at that time (but not on The Prisoner).

“You could argue,” he said, “that there can sometimes be too much creative freedom. I was told The Prisoner was a chaotic programme to work on, particularly towards the end. The people who worked on the last episode said they didn’t know what was happening from one day to the next. There was no schedule, there were no scripts, no lines, it was chaos. It’s a very interesting way to make a television programme, but it’s probably not the best way.”

“Well,” said Rupert Booth, “to my mind, The Prisoner was the absolute finishing of him as McGoohan: The TV Star. It was a bit self-destructive. This is when he’s getting through about two bottles of whiskey and day and he’s been through, I think, his third nervous breakdown. He was taking so much of it on his own shoulders and taking it so seriously and would not compromise ever.”

According to Lew Grade, at the time The Prisoner was in production, the President of CBS asked him: “Do you have problems with Patrick McGoohan?” Lew told him: “I never have any problem at all with Patrick McGoohan. He’s wonderful”… “Well how do you do it?” asked the CBS President. Lew replied: “I always give in to what he wants.”

“There were stories,” Rupert Booth said last night, “that McGoohan would not even have the word ‘television’ said on set. the word ‘film’ had to be used, because he thought people working on a television programme would potentially compromise their standards. It’s indicative, I think, of how much he was putting into it. Most of the stories about the filming of Fall Out are that it was either terrible chaos or glorious chaos, depending on what your role in it was. If you were an actor and were able to fall over chairs and dance around and sing Dry Bones: magnificent! If had to try to light and follow that with a camera: slightly more irritating. So, out of the chaos…”

After The Prisoner ended, McGoohan went to Lew Grade with other ideas.

“There’s one story which may be apocryphal,” said Rupert Booth, “that McGoohan took some ideas all nicely typed-up into Lew Grade and Lew basically said: No. Sorry. You’ve lost it. You’re too much of a risk and McGoohan absolutely spat the dummy out, stood on the table, kicked all the stuff off and stormed out and effectively destroyed his TV career in this country. Which (if true) was stupid and ungrateful, because Lew Grade had been tremendous to him. He had given him an awful lot of money. He had entrusted him. I think McGoohan was very unfair to Lew Grade in that way. It does seem from reports of that era that McGoohan was pissed off his face and spitting his dummy out and throwing all the toys out of his pram if he didn’t get his own way.”

According to Patrick McGoohan, talking about Lew Grade years later: “from the very moment he said Go (on production of The Prisoner) and shook my hand – we never had a contract – he never interfered in anything that I did. Never bothered me. It was marvellous. I can’t conceive of anybody else in the world, then or now, giving me that amount of freedom with a subject which, in many respects, I suppose you might say was outrageous. He has an instinct.”

Perhaps ITV could do with that now. People who take decisions – and responsibility – on instinct not on research figures from uncreative people. I oft quote the William Goldman sentence from his book Adventures in The Screen Trade: “Nobody knows anything.”

It means that creating TV programmes (and films) is an art involving gut instinct, not a science where you create ‘sure-fire winners’ from research intended to cover your ass if the show or the film fails.

There are some clips from Fall Out, the final episode of The Prisoner, on YouTube.