Not just puns, but Darren’s drawings

“You must be a nightmare to live with,” I told UK Pun Champion Darren Walsh yesterday.

“Other girls,” I said, “want their boyfriends to be more interesting. She would probably prefer to have one who’s duller. She probably wants to make you into a gardener or something.”

“Make me into a gardener? said Darren. “That’s a cheap dig. Soil you could think of?”

It is published by Century, part of Random House, the biggest publisher in the world.

Perhaps also appropriately for a pun champion, the book launch last night was on water – the River Thames.

“Why not a self-published book?” I asked Darren. “Random House is the Big Time.”

“Just luck, really,” Darren told me. “Tim Vine did a joke book which did incredibly well but he didn’t want to do another one and that paved the way a little bit because they were looking for something similar. I was going to self-publish my book and then Random House got in contact after they read about me winning the Pun Championship. They asked me if I wanted to make a book and I said: I’ve already made it. I walked into their office with an already-printed prototype and that was it.

“Because I’m such a geek, I had all my gags on a massive spreadsheet with a grading system from 1 to 5 – good to bad – everything categorised – for 2,000 jokes. So, when they said What are your best jokes? all I had to do was search by Top Quality ones and just give them that.”

“So it all went smoothly?” asked.

“Except that, when I signed the contract,” said Darren, “I posted it to them and they did not receive it. I had to send them another copy. Then I realised: Maybe it’s the address. I was sending it to Random House and maybe the postman just delivered it to a random house. That’s true. It went missing.”

“Do they just have European rights?” I asked. 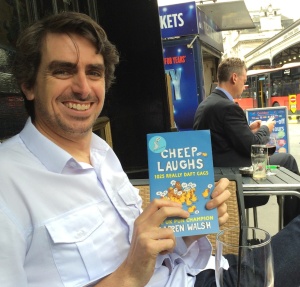 “I’m actually not very good at reading contracts,” said Darren. “I’m dyslexic, but I didn’t know until I did a test when I went to university. I was thrown out of university because I got drunk and impersonated the Course leader. Before that, I was just failing everything. I failed all my GCSEs. I can’t write anything. My friend Leo Kearse says if I write anything longer than a pun, it just reads like a retarded farm worker giving a witness statement. I’m no good at writing long things. The PR person at Random House has asked me to come up with ideas for features we can send to newspapers that I can write and had to say I can’t write properly.”

“Will you do a second book?” I asked.

“It depends how well this one does, but the second book is pretty much written because I’ve got over 2,200 jokes… 813 are in this first book along with about 300 drawings. The second book is already half-written jokes-wise. I just need to do more drawings.”

“I was always drawing and making loads of music; those were the two main things at school. I used to make lots of electronic music. I guess you could call it electronica.”

“That sounds,” I said, “like it comes from a different part of the brain.”

“Not really,” said Darren. “A lot of the people who like puns are musicians. The majority of people who come up to me after gigs and say I like that play the guitar or something like that. I think music and puns are not totally disassociated.”

“Supposedly music and mathematics are connected,” I said. “Maybe with music and puns you are connecting separate isolated notes and words and spotting some way they will connect.”

“I dunno,” said Darren. “But I would say there’s definitely a link between music and puns.”

“So you are a songsmith?” I asked.

“A lyricist? No. I don’t write songs; I make electronic music. People who are musicians and who like puns… That doesn’t come from the lyrics but from the music. I think composing must be a similar part of the brain.”

On YouTube, there is a video of Darren at the World Pun Championships

“So are you a frustrated muso?” I asked.

“Yeah. I’d say there’s quite a lot of frustrated musos on the comedy circuit. The puns are one thing, but the animations and video comedy elements are stuff I’d also like to get off the ground.”

“Your day job is working as a  a freelance animator,” I said.

“Yes,” said Darren. “A lot are online ads. And I’ve now got a lot of comedy videos on Vine and my own YouTube channel. I’m starting to hone my animation skills into my comedy now; I thought I might as well.”

“How do you write your puns?” I asked. “Do you sit down for an hour every day?”

“No,” said Darren. “If I sit down, nothing comes out. I’m constantly writing jokes. I just get my phone out and write them down. I’m constantly thinking them. They just come into my head. There’s no wiring process; I’m just always on. If I’m on my bike – which is where I get most of my ideas – I’ve got a clamp to attach the phone so that, if I get an idea, I can just type it in.”

“Yeah. What could go wrong while cycling round London?”

“Your full show at the Edinburgh Fringe wasn’t just verbal puns, though,” I said. “There was a lot of variation: visual puns, drawings and everything. But it only ran half an hour.”

“Even though I mix it up a lot,” explained Darren, “I think half an hour is enough. Listening to puns is a bit like sitting a maths test. Puns are basically just word puzzles. The brain of the person sitting in the audience has to figure out what the punchline is. If you have an hour of that, it’s very exhausting, no matter how good the puns are.

“I have an hour of material now, from doing two completely separate half hour shows. But, personally, I don’t think I’ve got an hour show. If you stuck the two together, all you’d have is an hour worth of gags, which is not what I want. I am going to do an hour show at the Fringe next year, I just need to work on it. Not just an hour of jokes. There will be a story or… It’s something I have to figure out before next August.”

“A lot of people break through with an autobiographical show,” I suggested, “but that’s quite difficult to do with puns.”