Writer Nigel Kneale: one visionary’s view in a pre-Margaret-Thatcher world

Nigel Kneale talked on the eve of Thatcherism

In a couple of blogs this week, I have posted extracts from a 1979 interview I did with writer Nigel Kneale, creator of the Quatermass TV serials. This is the concluding extract. The interview took place after Thames TV (via their subsidiary Euston Films) had produced the fourth Quatermass serial titled simply Quatermass (aka The Quatermass Conclusion). As you read the end of this interview, also bear in mind that it took place very shortly after Margaret Thatcher was elected UK Prime Minister. So the thinking is still based in the UK’s immediately pre-Thatcherite world.

Several projects you have worked on have folded.

Well, one of the first ones was when I was working with Ken Tynan again. We were going to do what would have been the last Ealing Studios film – Lord of The Flies. We were going to do that on a big scale, but Ealing folded. Then it became a property just lying about and Peter Brook decided to do it his own way (in his 1963 film) and simply stuck to the book. It is a very clever book, but very narrow. It seems to me to emerge as a satire on the public school system. We tried to get away from that and make it into a satire on people in general. I drafted a whole lot of girls into it: this was received with horror. Only girls – and children who were from a secondary modern school. They were not all trotting straight out of Westminster School.

I thought, otherwise, what are you saying about the state of humanity? You’re saying that children who come from Westminster School are innately a bit naughty. That’s all. Which seemed not to be sufficient comment on the state of mankind. Nor did it seem so to Ken Tynan. So we expanded it, but then there were squeaks of horror from other quarters. For me it worked and still does; it would have been, I think, a much better film.

Another project which folded, of course, was Quatermass IV which was originally going to be produced by BBC TV.

The previous Quatermasses had always been rather attached to their time. So the one in 1973 was to be of an impending social disaster, because there were signs of it. Then the oil crisis hit and it would have had even greater relevance. But it didn’t get made for a variety of reasons… including Stonehenge.

That was the one final, crucial complication. I had lightly written in Stonehenge because my last visit to it had seemed to make it very possible. What I hadn’t realised was that, in the interim, it had become big business and the place was like a factory with tourists there from dawn to dusk. It was the pride of the Department of the Environment and they were not going to let anyone go near it.

But it would have been possible to build a polystyrene Stonehenge.

Well, it would have taken a longer time in planning than we had at our disposal and there were budget problems.

Was the script the same as the Euston Films script?

No, it’s quite a bit different. For one thing, it’s now a film version entirely. At that time (1973), the great problem was to get as much of it as possible into TV studios because, in BBC terms, it is always cheaper. And, of course, it’s the sort of story that doesn’t very easily go into the studio.

It was lying around for a couple of years and Thames expressed interest in doing it and then it was a matter of finding exactly what form it could best be done in. And that was this dual format of a TV four-episoder (Quatermass) and a film (The Quatermass Conclusion) made out of the same material – which is very difficult to handle.

What did you think when you first heard of this format idea?

Well, I wasn’t crazy about it, because you feel you are either going to pad the long one or murder the short one.

So how did you resolve the problem?

I was very careful not to pad, because I knew that was the obvious thing, but to write in material which could be removed.

At a certain point, you can allow it to go in either Direction A or Direction B.

Direction A will take you into a kind of loop which will bring it back to where it joins Direction B and you just exclude the loop. That is not padding. It’s an apparently essential piece of action and it’s a perfectly legitimate part of the story, but you can do without it.

Yes, but that was only as far as one could guess. Because, as none of it had been shot, one could not tell what would actually work out best; some things paid off better than we’d ever thought.

How involved were you?

At that stage, I was busy doing the book version, which is radically different from the film.

The plot is different?

Considerably. We had three versions on the go – a novel which, I think, will read as though it was the prior piece. The TV version. And finally the cinema version, which is the shortest and meagrest telling of the story. So trying to juggle these three together could be extremely confusing.

So the book is a stand-alone novel rather than a novelisation?

Well, it was certainly intended to be. Because a novelisation is a cheapie thing of just changing the dialogue and putting ‘He said’ in front of it. Whereas this tries to explain the whole of Quatermass’ life way back beyond where any of the TV shows started. His family life, which we never see anything of in the others.

Did you always have these background details in your mind?

No. I think I worked it back logically. What it must have been.

This Quatermass sounds more pessimistic than the others.

Well, I don’t think it is really, not by the end. I think it’s got quite a lot of balancing material. The people are nice and it’s all about the people. 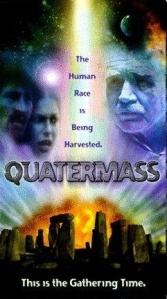 The human race is being harvested

The police are mercenaries.

Well, our police have gone and they’ve hired very nasty people instead. In the book, I’ve clarified that – a thing which only began as a hint in the TV version – that they’re (white) South African mercenaries. I thought that was the most likely source. I think it’s quite probable, by a development of events there, that they make it too hot for themselves and they’d be all too ready to offer themselves as a mercenary force.

We have a complete breakdown (of Society in the story) – All the social services have completely gone and there is no petrol or oil. Everything has stopped. The North Sea oil pipelines have simply ceased to exist and there is no fuel coming in. The only thing that survives is a minuscule pretence that everything is normal.

For instance, television still exists, broadcasting about two hours a day. They simply put on the last remnants of rubbish to show that everything is normal. Hardly anyone is able to view it because, for one thing, there’s hardly any electricity. It’s a continual series of power cuts and everybody’s too frightened to go out, so they sit in their houses hoping that perhaps their television set will come on.

Do you think things are actually going in that rough direction?

Well, don’t you think they might? There’s every indication of it at the moment.

So what happens? The end of Western Civilization?

It could very well be. I think there are alternatives. One is that the Arabs simply cut the juice off, knowing what will happen and being prepared to watch it happen. And then there’s the question of Will we let it happen or do we start bombing the Arabs and take ‘our’ oil back? So then what do we do? Have World War 3? Or a great technological downturn.

Is that what interested you in Quatermass? Seeing the way things are going and taking them to one possible ultimate conclusion?

Yes. The alternatives are fairly horrid. We’ve put ourselves in hock to a certain type of technology, which is oil technology. Another option is to rapidly develop nuclear power stations. But you’ve then stuck yourself with a new technology and you’re in hock to that. If anything goes wrong with that or the reactors all go critical, we’re finished and probably dead in the process. So we’re worse off.

The only safe thing is to go back to horses and carts with everybody keeping and eating rabbits and having a Stone Age technology. But that’s no real solution. We have too many people to feed.

A scene from Nigel Kneale’s final Quatermass serial in 1979

At the time your Year of The Sex Olympics was screened eleven years ago (1968), you were quoted as saying that, in ten years, television and computers would be taking over people’s lives.

Yes, it hasn’t moved as fast as that. Maybe it will be a technological downturn.