A comic’s heart, the medical benefits of cocaine and the sexual use of Mars Bars

This has been a funny and complicated old week so, instead of what I did yesterday, here are three extracts from my e-diary 15 years ago – on 8th October 1999.

This can give even a seasoned performer  heart palpitations

I phoned up a comedian. He was worried.

He had had more heart palpitations – for about 90 minutes.

This morning he had gone to his local hospital for tests.

He told me he would get the results within ten days.

He thought maybe the problems were caused by the stress of giving performances and moving house.

He talked of maybe giving up performing: “It makes you think,” he told me. 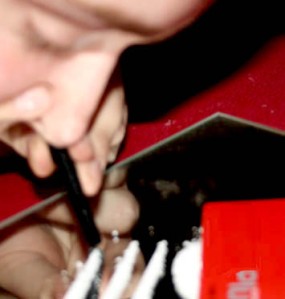 Not recommended by me (Photo is free from Wikipedia)

I had a meal with a TV colleague. He told me it was only taking cocaine that had got him off his anti-depressants (members of the Prozac family of drugs).

Before that, trying to get off the anti-depressants, he was getting bright silver flashes in his brain.

I think he should have stuck with the silver flashes, given the way coke has now screwed-up his brain and his personality.

A Mars Bar divided in half as it should be, not in a messy way.

I mentioned to the same television colleague the famous (possibly mythical) Mars Bar story involving Marianne Faithfull and the Rolling Stones. He told me it had inspired him to do the same thing.

But, with the Mars Bar embedded in the girl’s vagina, there is a point beyond which you cannot eat and, by that point, it has become impossible to extricate the stump of the confectionery bar from within the girl. It is further complicated by the fact that the periphery of the Mars Bar has melted and is, in effect, glued to the insides of her vagina.

He was reduced to exhorting her to push and push as if it was childbirth to try and expel the chocolate bar. Eventually, they succeeded.

One response to “A comic’s heart, the medical benefits of cocaine and the sexual use of Mars Bars”