What connects gangster Ronnie Kray & a famed gentle folk singer of the 1960s? 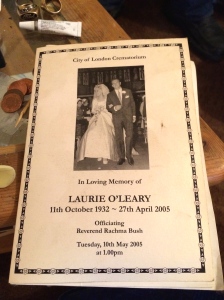 Three days ago, I posted a blog about gangster Reg Kray’s funeral. It happened today in 2000.

When I was talking to my chum Lou for a blog last month, there was a collection of funeral ‘programmes’ on a shelf in his living room. One had a picture of a couple being married. It was the running order for the funeral at the City of London Crematorium of Laurie O’Leary, who died on 27th April 2005.

He was a music business manager, tour manager and lifelong friend of gangsters The Kray Twins, Reg and Ronnie. 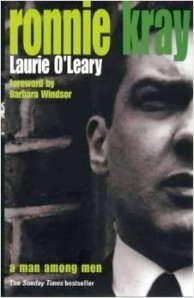 Ronnie Kray: A Man Among Men

In 1963, Laurie O’Leary managed part of the Krays’ Knightsbridge club Esmeralda’s Barn. In 1966, he managed Sibylla’s club, partly owned by Beatle George Harrison. In 1968, for ten years, he managed the legendary ‘A’ List music business club The Speakeasy.

“They said Laurie used to drink champagne for breakfast every day,” Lou told me.

The back page of Laurie’s funeral service

“Where did he get his money from?” I asked.

“Music!” said Lou. “The first time he brought Motown to England, we weren’t ready for it.

“The American acts came over, he paid them and he lost everything.

“But, when he brought them back a second time, he made a fortune. Stevie Wonder was on TV on Ready Steady Go.

“I went to Laurie’s funeral. Nice do. Lovely send-off.”

Lou told me about a letter from the imprisoned Ronnie Kray to Laurie O’Leary.

“It said something along the lines of: Hello Laurie. I’ve been sent a tape. I’ve had a listen to it. I think it’s quite impressive. I think we should sign him up. He calls himself Donovan.

“I dunno how Ronnie Kray ended up with all these musician types sending him tapes,” said Lou, “but he did.”

My own copy: Donovan’s A Gift From a Flower To a Garden

In my erstwhile youth, I was a big fan of Donovan.

I have no idea if Laurie O’Leary took up Ronnie Kray’s talent-spotting tip.

Donovan’s videos on YouTube include a live version of his song Mellow Yellow. Fourteen?

One response to “What connects gangster Ronnie Kray & a famed gentle folk singer of the 1960s?”