Punchlines: comics getting beaten up 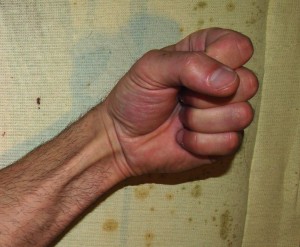 Yesterday, someone drew my attention to a copy of The Stage dated 26th April 1990. One article was headlined:

“Alarmed entertainers fear violence from rowdy club audiences may be on the increase after a series of ugly scenes which have put artists at risk on stage.”

Apparently comedian Paul Ramone had got a black eye and swollen nose after being head-butted by a member of his audience during a gig in Twickenham.

Manchester hypnotist Paul Nyles claimed he had had to abandon his act after 15 minutes when an audience member bit through his microphone cable. There were no details of what happened to the heckler when he did this.

Comedians getting beaten-up seems to be a non-uncommon phenomenon although biting through the microphone cable to stop an act is uncommon.

Off the top of my head, I remember three Edinburgh Fringe stories. One is told in Malcolm Hardee’s autobiography I Stole Freddie Mercury’s Birthday Cake:

An excellent performer called Ian Cognito was there and he was very drunk, as is his wont. When he’s drunk, he gets aggressive. Part of his Italian upbringing, I think.

Ricky Grover had worked with him before, so said hello to him and Cognito grabbed him by his collar and said:

Ricky doesn’t mind that sort of thing at all. He’s used to it.

So, not getting a reaction, Cognito continued:

“You’re a fat cunt and you’re not funny!”

“And your wife’s a fat cunt as well!”

This upset Ricky, because he’s one of those traditional people.

“Did you mean that?” he asked.

“Can you repeat it?” Ricky asked.

And, with one blow, Ricky just knocked him out. Unconscious. Displaced his jaw a bit. The lot. Ricky’s a professional, so he knows exactly where to hit someone.

Standing three or four yards away was Jon Thoday, who runs the Avalon agency. I looked over at Jon and said:

Funnily enough, the cheque arrived in the post about two days later. 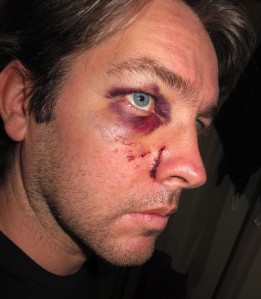 In 2012, comedian Ian Fox was randomly attacked in the street during the Edinburgh Fringe. The local police, who allegedly knew quite a lot about beating people up, told the Edinburgh Evening News: “The victim suffered a small cut to his nose during the incident,” but Ian’s face looked more like he had had an argument with a rhinoceros.

And, of course, most infamously, in 2013, comedy performer Ellis got beaten up in an Edinburgh street by an irate member of the public who was annoyed by Ellis & Rose’s appearance in Jimmy Savile: The Punch & Judy Show.

Except it never happened. In fact, Ellis had repeatedly hit himself in the face with the blunt end of a milk whisk so he could tell the being-beaten-up story to get publicity for Ellis & Rose’s Fringe show. When the blunt end of a milk whisk did not have the required effect, his comedy partner Rose punched him four times in the face to give him the required black eye. For this, they won a Malcolm Hardee Comedy Award.

To me, the most bizarre part of the 1990 Stage article, though, was a paragraph towards the end which said:

“Alternative comedian Malcolm Hardee, who was knocked unconscious by a heckler at a Glasgow club, claims attacks are on the increase because comedy has become more aggressive.”

That this had happened to Malcolm seemed very unlikely – although admittedly Malcolm’s Tunnel Club had to become membership only after beer glasses were thrown at Clarence & Joy Pickles (Adam Wide & Babs Sutton) during their act.

Throwing beer glasses at acts was not uncommon at the Tunnel but, on this occasion (when Malcolm was NOT the compere) a glass hit Babs Sutton in the face and drew blood, after which several acts refused to play the Tunnel unless Malcolm reined-in his audience a bit. 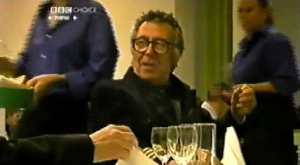 Malcolm Hardee – a comedian not unacquainted with alcohol

Anyway… Malcolm Hardee being knocked unconscious by a heckler at a Glasgow club sounded unlikely, so, yesterday, I asked Malcolm’s chum Martin Soan.

“This sounds unlikely,” I said. “Have you heard this story? Did he make it up?”

Malcolm making-up stories was not unheard-of, but Martin said surprisingly:

“Yes I do remember this. It is true after a fashion. The heckler sort-of pushed Malcolm in a friendly sort of way. Malcolm had drunk 13 pints of beer and some buckets of rum-and-coke and sort-of fell asleep for a bit… Talking of which, I had a knife pulled on me… twice. Once at the Old Tiger’s Head in Lee and once on the Glastonbury stage.”

Comedy can be a dangerous business.

2 responses to “Punchlines: comics getting beaten up”