My dream island: my latest visit 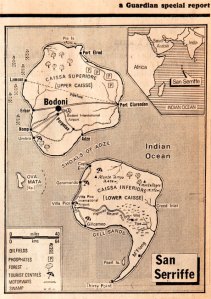 This is not the island that I write about

There is an idyllic little island which, I think, is off the north west coast of Africa.

You reach it via an entrance in the basement of the Odeon cinema in Leicester Square, London.

It has lots of TV channels and they are thinking of starting a TV channel which will tell you about any programme changes on any of the other channels.

I was thinking about the island this morning as I woke up.

I was trying to figure out if this was a real place or if I was dreaming about it. What confused me was that I had been there before.

Guardian reported on San Serriffe in 1977

And this was strange because I never remember my dreams – which made me fairly sure this morning that this must be reality and not a dream.

In fact, I am not sure I have actually been to the island. Unlike most dreams, there were no visual details – which, again, made me fairly certain it was not a dream. It was more like I was experiencing the concept of an island reached via the basement of the Odeon cinema in Leicester Square, rather than the reality.

All I could really see and all I really remember is the view within the stairwell leading down into the basement of the Odeon, Leicester Square, not any sight on the island.

I have been to the island more recently than the Odeon

I do not think I have been to the Odeon, Leicester Square, for perhaps a year or eighteen months.

Perhaps the Odeon chain have found a way to reach into people’s minds to practise subliminal advertising.

I guess it must have been a dream this morning. But the dream was very real. Though strangely un-detailed. Which made me think it was real, because a dream would be more vivid.

I usually write down in this blog the few dreams I remember.

If I start remembering too many dreams, I think I may have to stop writing them down.

I think it is possible you may agree with me.

One response to “My dream island: my latest visit”