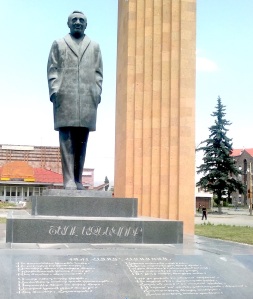 A statue of Charles Aznavour in Gyumri, Armenia (Well, he was really Shahnour Varinag Aznavourian)

I thought I was onto a winner for today’s blog. Seeing a show AND comedy news from Germany.

It was not to be.

I once heard French singer-songwriter Charles Aznavour being interviewed and asked why his songs were almost always about sad things not happy things and he explained it was because everyone is sad in different ways for different reasons but what can you say about being happy? Being happy is fairly uniform and therefore there is nothing to analyse and dissect.

In a sense, the same goes for successful stage shows. Awful stage shows are interesting to dissect and write and read about. Totally successful shows? What can you say about them? Not much. There are about ten enthusiastic adjectives of exultation you can use and that’s it without giving too much of the show away.

In this blog, I keep rattling on about how pure, straight stand-up comedy is getting a bit dull and there should be more Variety in comedy shows.

A fortnight ago, I saw the first night of Slightly Fat Features’ Variety Soup show at the Leicester Square Theatre. It was wonderful and I did not write a blog about it…

Last night, with comedy couple Martin & Vivienne Soan, I saw Variety Soup for a second time. It was just as perfect as the first time.

An utterly brilliant script and flawless performances from seven men (only men) at the top of their performing game. 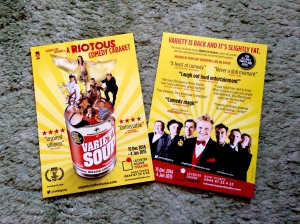 Variety Soup – 100% successful show even with the fake dwarf

A great opening, then juggling, cling-film escapology, a pantomime horse, a classic quick-change sketch, a cup-and-ball routine, a Rolf Harris painting routine, a song-and-dance routine, ‘Find The Lady’ with a real person’s head, a diabolo routine spanning the auditorium, a cute dog, occasional things going wrong (all scripted, I think), an audience participation song and a sawing-in-half magic routine… all with presentational twists, superb attention to detail and knowing post-modern nods and glances to the audience.

Each short routine would have been a featured speciality act in the original Sunday Night at The London Palladium (before ITV ballsed-it-up in their recent re-make).

In other words, Variety Soup is a show so 100% successful I have nothing to say about it.

Well, it is 99.5% successful. There is one highly dubious routine involving a supposed dwarf cowboy. I abhor over-PC zealots and this routine was all done with such charm and originality that the audience loved it – in fact, the packed audience loved the entire show and gave it a standing ovation at the end – but, at this point, we were being suckered-by-professionalism into to laughing AT the antics of the fake dwarf, not WITH his antics.

Just not a blog.

Comedy news from Germany? There wasn’t enough time to ask Martin and Vivienne about their recent visit to Leipzig.

Tomorrow, I have high hopes of a proper blog.

Perhaps I will see a less-brilliant show.

Perhaps I will have tea in Mayfair with a man who did not once firebomb a house.

Life is full of surprises.