Yesterday, I saw a Tweet from William Shatner (yes, he of Star Trek fame) to his 2.04 million Twitter Followers about my chum Janey Godley’s daughter Ashley. It read: Wanted: One decent boyfriend for @ashleystorrie. Aristocrats preferred. Enquiries and credentials to: @JaneyGodley

The thought of Janey Godley’s bloodline entering the British aristocracy has its good points and its bad points.

Yesterday evening, I had to take my eternally-un-named friend to the Accident & Emergency Unit at Lewisham Hospital. Nothing life-threatening: just a bad fall and possible rib fracture. This was bad news and good news.

No X-ray. They don’t do anything for rib fractures. Just muscle damage presumed and it takes maybe six weeks of pain before it mends itself.

There have been stories of the breakdown of the British A&E system and waiting “only” four hours to be seen if you are lucky. In fact, it only took 50 minutes to see the first medical person and 70 minutes to see the main doctor. So around two hours in all. Either we were lucky or my standards are falling. Presumably if my eternally-un-named friend’s arm had been hanging off and pouring blood, it might have been faster.

But the late A&E visit and an early-ish start today means a quick blog.

Luckily, when I got home at 2.00am last night, an unprovoked e-mail from Anna Smith, this blog’s occasional Canadian correspondent, was waiting for me. Here it is: 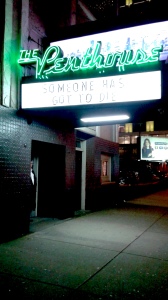 This isn’t really a story, but the marquee in this picture – SOMEONE HAS GOT TO DIE – caught my attention yesterday. (Today it has gone back to normal.) The Penthouse was the best strip club in Vancouver for many years. It is now one of the only ones left. I enjoyed working at The Penthouse in the late-1970s and mid-1980s. The owner, Joe Filippone, was shot to death. There is a good book about the place by Aaron Chapman called Liquor, Lust and The Law. They sell the book at the club. I liked working there – good food, good dressing room, good stage, good money… and Italians are good to work for in that capacity. They have plenty of women around, so they don’t act like there’s a shortage. 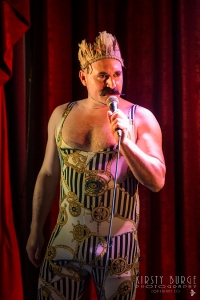 Adam, the object of Anna’s admiration… (Photograph by Kirsty Burge)

I have never met Adam Taffler (whose grandfather was a strongman and who has occasionally appeared in this blog) but I can relate to him. Especially the lady lifting. I used to lift up ladies all the time when I was 17. I don’t know why. I enjoyed grabbing women around the hips or waist and lifting them a few feet off the ground. Of course I asked them first. Most of them said Yes, and they thought it was fun,. Nobody had ever done it to them before. But, until I read about Adam”s grandfather, I had no idea that I could have made a career out of it.

And the fact that Adam’s granddad was in those sea spectacles… My first job in a club involved sitting on a swing that came down from the ceiling on chains. A bouncer would lower the swing, I would get on and then he would push a button and the swing wound up, up, up. I would pretend to be tipsy and everyone would wonder if I would fall off. I like those basic things like lighting and machines and costumes. I have always had an enjoyment of that kind of stuff… fake waves, hoisting machinery, mermaid tails lying around in dressing room closets… 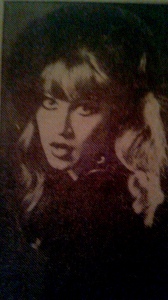 Photo of a previous incarnation of our Canadian correspondent  Anna Smith Her suggested caption is: Does Adam Taffler have any helpful hints on how to keep my mouth shut? (Adam runs silent dating events)

I found a mermaid tail on the floor of  the closet of the dressing room at the Gargoyle Club in London. Nobody used the closet because the centre of the room had long rails made of plumbing pipe to hang our costumes on. There were hundreds of empty hangers dangling on the plumbing pipe rails with shreds of 1960s and 1970s costumes trailing off them. This was in the 1980s. Our costumes were more minimal of course.

Goats are very clean and intelligent. I thought a pygmy goat would be good for sailing – so I could make foam for the espresso. It’s just a fantasy of mine. I spent my entire adult life avoiding that white powder people put into coffee because I thought it was poisonous and made out of petroleum. But, a couple of years ago, I tried it and it’s delicious. It’s like ketchup. I didn’t know what it was and it looked so bloody. I had no idea what it tasted like.

Goats are like actors. They delight in the sound of their own feet, so they would like running around the deck of a wooden boat.

I have little-to-no understanding of how Anna would extract foam from pygmy goats but, as I said at the start of this blog, sometimes, especially with Anna, some questions are better left un-asked.