One of those occasional death blogs 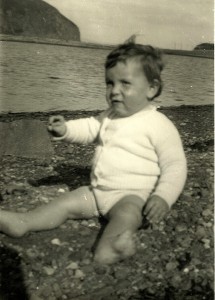 I always thought this photo of me was rather cuddly – until someone I knew once said to me: “Oh – You weren’t a pretty baby, then.” (Photo taken near Davaar Island, Scotland)

I have a couple of blog chats recorded and ready to be transcribed. They should be interesting if quite-complicated-to-write. And they should be quite jolly.

But, instead, you are getting one of those occasional blogs about death.

Largely because it is quicker to write.

A friend of mine years ago told me she was afraid of dying, afraid of the prospect of non-existence.

I have never really had that problem.

I tried to kill myself when I was 18. It was not a cry for help. It was a genuine attempt. But I was always shit at chemistry. I mis-calculated. What can I say?

The trouble is you can’t sensibly kill yourself because it adversely affects other people. Even if it’s only the unknown-to-you person who has to scrape you up.

But I know what it is like to ‘know’ (wrongly) that I am going to die in ten minutes or three hours or 45 minutes or a couple of hours or two minutes time. Pretty soon, anyway.

And I know death can happen at any time without warning. When I got accidentally hit by an articulated lorry when I was standing on a pavement in 1991 – when I fell, I hit the back of my head against the right-angled edge of a low brick wall, cutting open my head and jarring my spine – I could easily have been killed or paralysed.

I remember reading that some bloke was mending his bicycle in his living room just before Christmas 1988 – well, actually, it was Wednesday 21st December 1988.

It was in the Scottish town of Lockerbie, a quiet backwater – I had been there sometimes with my parents when they visited friends there.

And a Pan Am jumbo jet fell on his street. Not my parents’ friends’ street. The bloke mending the bicycle. The piece I read said he ceased to exist: his body melted along with the bricks of the house. How they knew he was mending his bike in his living room I have no idea.

Anyway, I don’t care about not existing – I never have since I was 18, which might explain something of my psychology.

But, last week, I was thinking about something which happened 30 years ago and, somehow, it felt like I could, inside me, feel Time… How that 30 years fitted into 100,000 or 100 million or a 100 billion years… And, inside, I felt frightened. There was a little physical chill inside my torso and a psychological fear.

And I don’t know why.

I almost never feel frightened because – to quite a large extent – I really don’t give a shit. What is going to happen? Someone is gonna kill me? A jumbo jet is going to unexpectedly fall on my head? I don’t care.

So it was a surprise to be frightened by (it seemed to me) feeling the brevity and pointlessness of 30 years in a million years or 30 billion years. I know it’s all pointless. It does not worry me. I don’t care. I know what it feels like to ‘know’ I will be dead in ten minutes. Or to have had something happen without warning that could have killed me instantly.

A better understanding of chemistry and I would have died.

Another angle-of-decline, the jumbo jet would have hit another street.

Last week I left the room I was in and went out and walked to the shops, didn’t buy anything and came back.

Unless a jumbo jet falls on my head or I hiccup myself to death.

And that can be a good or a bad thing.