I was first aware of Sandra Smith when she turned up every day at a week of chat shows which I chaired at the Edinburgh Fringe in 2013. Since then, she has been turning up at all sorts of comedy shows. Yesterday I said to her:

“You told me you ‘discovered’ comedy two or three years ago. How can you suddenly have discovered comedy?”

“When I was growing up,” she told me, “I didn’t like comedy at all, because I grew up in a time when everyone wanted to tell you a joke and I found it excruciating. I just wished they wouldn’t.”

“Why was people telling you a joke excruciating?”

“Because I felt I would have to ‘get’ it and I would have to laugh, because they’d be embarrassed if I didn’t. It was just a nightmare. I didn’t like comedy and, even today, I’d prefer a drama over a comedy film.

“So I didn’t engage with people like – I guess they were stand-up comedians – Bob Monkhouse and Bob Hope and all that sort of thing. I just thought: What are they doing?”

“So,” I asked, “how did you start to get interested in comedy?”

“It was after I had been with a friend to see Paul O’Grady recording a TV show on the South Bank and Pat Monahan was doing the warm-up. I didn’t know anything about warm-ups, but I thought Pat was really good with the people.

“I was not going to go again, because it wasn’t particularly my cup of tea, but then I was told Jo Brand was going to be hosting the Paul O’Grady show, so I went along again. Then I watched a Graham Norton Show being recorded.

ITV Show Me The Funny with Pat Monahan second from left

“And then I saw Show Me The Funny on ITV, which I liked. I think I am the only person in the world who did.”

“Because it was all very new to me and I thought: Oh! There’s that bloke from Paul O’Grady (Patrick Monahan) on it. Comedians were starting to come into my awareness a bit.”

“Show Me The Funny,” I said, “was a terrible dog’s dinner of a format.”

“I couldn’t care less,” Sandra told me. “I was seeing all these comedians and I thought they were all new. I thought Pat was new. I hadn’t got a clue. I would have loved it more if there had been more stand-up instead of all the chitter-chatter, but I liked the exchanges between the comedians. I enjoyed it.”

“You say you wanted more stand-up in it,” I pointed out, “yet you said you hated jokes.”

“Yes, but it was different, somehow. I was getting to like it, because it’s not really just jokes nowadays, is it? It’s more observational stuff. It’s different. 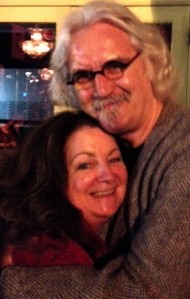 “Before that, I had seen Billy Connolly and I hadn’t realised that he was a stand-up. I thought he was just a great storyteller and I thought: How does he do that? I loved that.”

“Well,” I said, “you’re the perfect audience for modern comedy, because it used to be short gags but now it’s mostly storytelling… So you were getting to like it…”

“Yes,” explained Sandra. “And then Pat Monahan came to Brighton where I live and, because it was someone I knew of, I went with a friend to see him at the Komedia. I hadn’t been there before. It was great.

“Then I was up in London one day and saw that Pat was on at the 99 Club and it was quite a big deal for me to walk into a comedy club by myself. And from then on, I started to like comedy and saw more. It was like opening a door and seeing this different world.

“I like performance – I always have. In my early years, my mum used to take me to the Theatre Royal in Brighton and we’d sit in the gods. I wasn’t particularly engaged with that; I just went along; I went to the cinema a lot; and a friend would take me up to London for ballet and music and her mum was in the theatre as a dancer. But not comedy before I saw Pat.”

“And then you went up to the Edinburgh Fringe?” I asked.

“Yes. I went up for two weeks in 2013. I just loved it. I had a fabulous time. I went to your show that year (John Fleming’s Comedy Blog Chat Show) because I had been reading your blog.”

“How had you stumbled on my blog?”

“I can’t remember, but I started reading it and it just seemed interesting. Then I saw you were doing a show and, as is my wont, I just booked a ticket for every day.”

“Kate Copstick co-hosted that show most days,” I said. “Did you know of Copstick?” 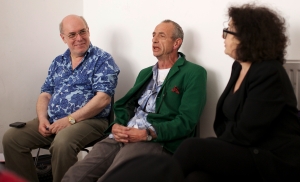 Arthur Smith and Kate Copstick at my 2013 Fringe chat show

“Yes. Because she was a judge on Show Me The Funny. But I went to your show because there were going to be people there I had never seen before. I had never heard of Arthur Smith.”

“How on earth had you avoided Arthur Smith?” I asked. “He’s ubiquitous.”

“By not watching comedy. My daughter knew about him because she’d heard him on the radio.”

“Because he’s just an engaging bloke. I saw him singing Leonard Cohen. And I saw Sol Bernstein a few weeks ago. I loved him.”

“Did you think he was really an American comedian?” I asked.

I told Sandra: “I saw him play a Monkey Business show a few weeks ago and I think about 80% of the audience thought he was real.”

“I did,” admitted Sandra, “watching it. I wasn’t sure. Then I thought: Perhaps he’s not. It was just delightful at the time.”

“Do you think Lewis Schaffer is a character act?” I asked.

“I don’t know what to make of him. I’ve only seen him twice. Is he really as insecure as he seems? Or is that put on?”

I answered her, but let us not go yet again into the psychology and/or performance art of Lewis Schaffer.

Sandra said of Lewis Schaffer: “I thought maybe he was a totally different person away from the stage. I will have to see him again. I can’t get a handle on his act. I think it’s probably different every time. Somebody walked out of the first show I saw him in. That was great. It was wonderful. I think it was the Madeleine McCann joke she objected to. She had given a sort-of warning sound Ooooaarghh! and then it was Oh! This is too much! and she stamped out. It was funny, because she walked out and, somehow, her jacket got caught on the door and landed on the floor and she didn’t come back for it: one of the staff did.”

“I liked seeing Dr Brown because watching it was exciting because I didn’t know what he would do next – It was like Red Bastard, who I’ve seen three times. And I like the fellah who stands upside down on his head – Terry Alderton.” 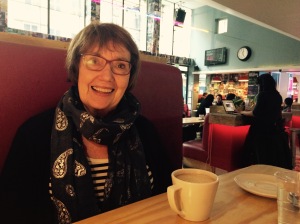 Sandra Smith – fan of the bizarre – at Soho Theatre yesterday

“Yes. Oh yes. And I like Luisa Omielan. She’s just funny and uplifting. And Janey Godley. Every time I go into one of her shows, I feel very welcome – it’s a real rush of Oh! I feel welcome! But, at the same time, she can be a tartar.”

“Have you read her autobiography?”

“Yes. Oh yes. It’s not the sort of book I would normally read, but I couldn’t put it down. It’s amazing. She’s a natural storyteller. I like storytelling.”