Sex, drugs and thievery in Canada and Scotland… Boredom is so, so subjective

After a suspicious pause, during which I don’t even want to speculate what she might have been up to, Anna Smith – this blog’s occasional Canadian correspondent – sent me two photographs.

The first shows her holding a red umbrella atop a sign saying SEX FOR ALL and a red logo with a wheelchair in it. She tells me:

“The photo was taken at the end of our annual Red Umbrella Rally.”

I know no more, dear reader. Anna lives in Vancouver, Canada. It is a foreign country. They do things differently there. 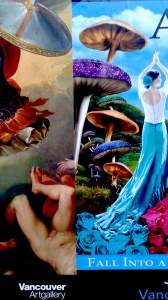 “The other weird photo,” she tells me, “is of two posters beside each other, one advertising Classical Italian Art from Glasgow Collections with a poster for a flamenco version of Alice and Wonderland. I suppose they do that in Glasgow all the time.”

Her view of the exciting lives led by Glaswegians may have been influenced either by Janey Godley’s Tweets and Periscope videos or by an article Anna read in The Economist declaring how ‘mind-numbingly boring’ Vancouver is.

Anna tells me: “Actually, nobody here gives a shit because they have never heard of The Economist. And I was laughing my guts out because I only read The Economist if there’s no other choice because IT IS SO BORING! Although,” she added, “Vancouver, aside from all the strange people, actually IS pretty boring. 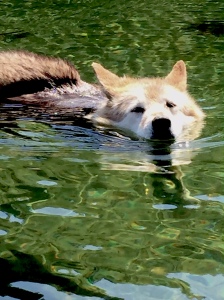 “Look at myself for example. What do I love most about living here? Watching the river flow by.

“The last major uproar in Vancouver was about a plot to close the road on the Burrard Bridge for a massive yoga ‘Be-In’ by people wearing yoga pants, sponsored at enormous cost by the Provincial Government, which is helmed by an idiotic bimbo named Christy Clark, also known as ‘Gidget’.

“Taxpayers became enraged. The Yoga Pants manufacturer’s headquarters are at one end of the Burrard Bridge. I don’t know where its hindquarters are. Then rumours started building that the Russian gas company Gazprom was also involved and the whole thing exploded.”

On The Province news site, Premier Christy Clark announced that the event on 21st June would be live-streamed online “for the world to witness.”

She told members of the public: “Bring your yoga mat, bring your best yoga poses, get on the bridge and make a statement about who British Columbia is.”

I have to say that, closing a bridge to do this, does not make Vancouver seem boring. Mildly eccentric, yes. But boring, no. And, to undercut the boring image even more, Anna tells me:

“In the headlines here are the ever growing number of marijuana storefronts. There are more dispensaries in Vancouver than the entire rest of Canada. The dispensaries are supplied by illegal drug gangs.

“Also, medical marijuana users battled against the federal government in The Supreme Court of Canada and won their right to imbibe THC in whichever form they choose – cigars, salves, oils, cookies, cake or pizza.

“I was on my boat, listening to the radio, when the decision came through. The CBC announcer said joyfully: “Canadians are now free to partake in whatever form of marijuana they choose, including suppositories! This will really open the floodgates!” 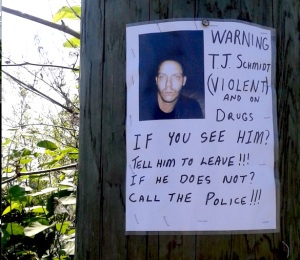 Notice on tree in Vancouver about a dangerously violent man

Anna lives on a boat in Vancouver.

“I was up on the road two marinas upriver,” she tells me, “saying to a man: Did you notice that our marina has ‘ WANTED ‘ signs up?

“The signs said: WARNING. VIOLENT AND ON DRUGS. IF YOU SEE HIM TELL HIM TO LEAVE!!! IF HE DOES NOT? CALL THE POLICE!!!

“Then another man came up and said: That’s my son. He’s NOT wanted. I keep moving and he keeps finding me.”

Meanwhile, back in what still remains for the moment the UK, today’s Scotsman newspaper reports:

The remote Hebridean island of Canna has been targeted by thieves for the first time in half a century – with the culprits making off with woolly hats, coffee, biscuits and beauty products. 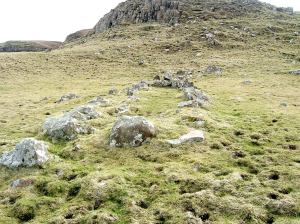 The theft on the idyllic island… has left the tiny population of only 22 stunned… The crime, committed between 8pm on Friday and 8am on Saturday, is believed to be the first on the remote island since a wooden plate was stolen in the 1960s.

Boredom is a comparative and subjectively-used word. A Norwegian king lies buried on Canna. Well, so it is said. There is no archaeological evidence for the claim, but it is a story that maybe brightens up the bleak winter evenings.