Last night, for the very last time, I went to Pear Shaped in Fitzrovia, the always fascinating (note the careful use of word there) weekly comedy club run, for the last 15 years by Brian Damage & Kryssstal (Vicky de Lacy) with Anthony Miller.

The club is closing because the Fitzroy Tavern pub and its basement are having a big refurbishment lasting, perhaps, a year. Well, OK, the story seems to be that, as part of the refurbishment, the club may be turned into a toilet. I pause while you make up your own joke.

“They’re closing down next month,” Brian Damage told me last night. “They do want us to come back, but that’s nine months away.”

“Have you got another venue?” I asked.

“We’ve found another one,” said Brian. “But nothing settled yet, so I’m saying nothing.”

“If you’re now free,” I said, “you can go to the Edinburgh Fringe in August.”

For years, Brian and Vicky used to run the Holyrood Tavern up at the Fringe, including the extraordinary Pear Shaped at Midnight shows where, whenever I went, there was no ‘real’ audience, merely acts watching other acts perform after their own shows had ended. Shows can often be better without an audience of punters. These shows were.

“You met Vicky at the Fringe, didn’t you?” I asked.

“Yes,” he told me, “I was asked to compere a show up there. We met and, one night, I was pissed and I said: We could run this fucking place, thinking it was easy. It wasn’t, of course. I didn’t know Vicky used to run theatres in Australia. I couldn’t run it, but she could.”

With Brian Damage and Vicky de Lacy in December 2007

“Where did you and I first meet?” I asked him. Memory is not my forte.

“On the Wibbley Wobbley,” he told me. “We ran the new act night there for Malcolm Hardee – we booked the acts.”

Look, it’s not my fault that conversation often turns to the late comic/ promoter/ club owner Malcolm Hardee. After running the infamous Tunnel club and the more respectable Up The Creek, he staged shows in Rotherhithe on a converted German barge, The Wibbley Wobbley.

“Malcolm was,” said Brian last night, “the opposite of all the bullshit and all the crap that enrages me. When I first started doing comedy, I loved a bit of bullshit.”

“Well now,” said Brian, “because of the fucking barrage of shit I have coming at me every single day on Facebook, all the arguing and the bollocks. I’ve got to the stage where I’m thinking I don’t care about any of it.”

“Well, maybe it is,” said Brian. “But I just don’t care. The things that people are arguing about…  for fuck’s sake. They actually have discussions about Are women funny? Fuck off! I mean, Fuck off! It’s so rubbish.”

“I’m only on Facebook for business purposes,” said Brian. “Thank God I’m not on there as a human being. There’s so much shit coming at me, I’m fucked if I’m going to add to it. Fuck off!”

“The Queen,” I said, changing the subject, “may have to leave Buckingham Palace for six months while they refurbish it.”

“Yes, we could move in there for a few months,” Brian mused.

“Tonight is one of the few nights we’ve had an audience,” Brian told the audience. “I reckon what we should have done over the last 15 years was, every week, say CLOSING DOWN and I reckon that would’ve done the trick.”

Over the last 15 years, enormous numbers of starting-out comics have performed at Pear Shaped, which is billed as “London’s Second Worst Comedy Club”.

The worst one, Brian claims, was the one they ran before the current Pear Shaped. Well, current until last night. 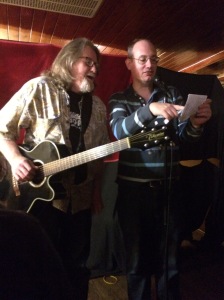 One of the acts last night (I have tragically forgotten who) said that Brian & Krysstal’s next club will, by definition, be better because it will be London’s third worst comedy club.

Anthony Miller told the assembled throng: “You have to see it in perspective. The David Lean Cinema in Croydon has as many seats as this room and managed to lose half a million pounds in a year. So, compared to that, we’re slick.”

Malcolm Hardee Comedy Award winner Robert White apparently gave his first performance at Pear Shaped. He was there last night and gave Anthony Miller a farewell kiss. It seemed not to be appreciated.

As always, Brian Damage started the evening by singing the club’s theme song (to the tune of The Flintstones TV series):

At the end of the evening, he sang: