A Rumble, women talking about their sex lives, Fringe awards and my big toe

Things are not as bad as they seem (Photo by MEUNF)

Yesterday someone – as people often do – asked me if it is difficult to find subjects for this daily blog. “No. Not at all,” I told them.

But, of course, the difficulty is often fitting in time to actually write the bleedin’ blogs, especially if (as is often the case) listening to, transcribing and editing 45-60 minutes of chat is involved even before I start writing the bleedin’ things.

Even when there are no lengthy chats to transcribe, time or too much stuff coming together can be a problem.

For the 16 days until I leave for the Edinburgh Fringe, I already have 9 recorded chats, I am seeing 11 upcoming shows, there are two podcasts to plug and I am meeting up with 5 other people for possibly bloggable chats. Plus whatever else turns up.

Ali Jones having a Rumble in Hemel tonight

Tonight I went to Hemel Hempstead to present one of The Rumble Awards. They “celebrate the positive contribution people with learning disabilities and differences make to the world and recognise their unique skills and talents and personalities”.

Organiser Ali Jones says the awards are not about doing things for people but doing things with people. The recipients are the participants and her Pioneer Approaches organisation are complementary therapists who compliment people.

The prestigious two-hour Rumble Awards show tonight was basically a series of awards wrapped up in a variety of other interesting events.

More later in this blog, as you might expect, about another increasingly prestigious two-hour awards show.

The last couple of weeks have involved me seeing a lot of Edinburgh Fringe previews in London.

Some of the ones I have seen recently might seem to imply that a 2015 Fringe theme will be female comedians talking in extreme detail about their sexual experiences. So far I have had Sara Mason with tales of Burt Lancaster piercing her hymen and much more… Giada Garofalo linking her sex life, fairy tales and serial killers… and Sofie Hagen, whose very first line in a preview of her Bubblewrap show two nights ago (I might be paraphrasing, but only slightly) was:

This week has been awash with unexpected lines. I had Fringe preview organiser Dec Munro say to me, without any introductory explanation:

Dec Munro tries his best to mount a horse

“I wanted to be the king of gerbil sales at school. Michele was going to be Gary Lineker’s wife and so I played romantic music – Barry White, all that sort of stuff – into their little gerbil cage and actually sang Let’s Get It On a couple of times to them. Unfortunately, after six-and-a-half months, it transpired that both of them were male.”

“Explain,” I asked him, “the phrase ‘I was the king of gerbil sales’.”

“I said,” replied Dec, as if explaining it, “I WANTED to be the king of gerbil sales.”

That was on Monday.

Then, last night, after a preview of her show Punching Pigeons, Martha McBrier insisted I should give her a Malcolm Hardee Cunning Stunt Award this year. 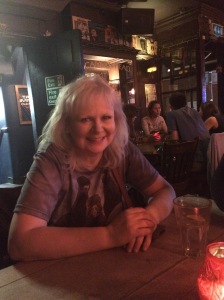 “Because,” she said, “Malcolm Hardee died on my birthday – the 31st of January – and that was very hard to organise in advance.”

“In many ways,” she replied, as if this explained something.

Either I am developing dementia or explanations are getting less clear.

Then the Edinburgh Fringe Office sent me a list of awards at the Fringe this year, which excluded any mention of the three increasingly prestigious annual Malcolm Hardee Comedy Awards. I suggested, they could just repeat last year’s listing, but a new one was written by them for me, which was very nice of them. It read:

The Awards are in memory of Malcolm Hardee, one of the most anarchic figures of his era, a great influence on British comedy over the last 25 years and the Godfather to a generation of comic talent.

The Comic Originality Award is for performers who, in the opinion of the judges, have not yet been given the attention they deserve and who have potential for continual development.

The winning act does not need to have the potential to become a major mainstream star. It is an award for people who deserve to succeed and who deserve to have their potential recognised and nurtured but who have not yet received their due recognition.

Acts will be shortlisted by a panel of judges and awards will be presented during a two-hour variety show Friday 28th August 2015 as part of the Laughing Horse Free Festival.

The Fringe Office asked: “Could you clarify how the selection process is made?”

I suggested: “If you fancy, you could change: 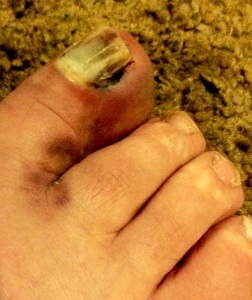 My toe – shortly after it got unexpectedly shelved

It seemed like a good idea at the time.

So it has been a fairly odd week.

And then the nail of my big toe started coming off.

Over a month ago, the sharp edge of a heavy wooden shelf fell on the big toe of my right foot

Cutting into the bottom of my big toenail.

Well, I think maybe it actually did cut the toenail under the skin.

The nail has now grown to a point where it is loose on the right and unconnected to anything at the bottom.

My toe this week – The left is just hanging on.

But it is stubbornly remaining attached on the left by, I suspect, clinging on to some congealed blood.

I suspect the nail will come off any day now.

Someone suggested, when it inevitably does, I should wear it round my neck.

I meet some strange people.

But I wouldn’t have it any other way.