Laurence Owen, comedy songsmith with a marriage made in Disney World 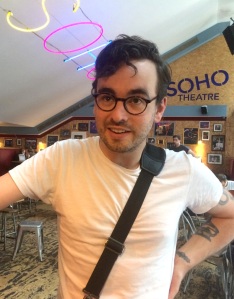 “You’re doing quite well,” I said to composer/performer Laurence Owen when we met for a chat.

“I suppose so, “he agreed.  “There are now two Wikipedia pages on Laurence Owen – one is me and the other is a deceased female figure skater.”

“It is absurdly detailed,” said Laurence, “but I didn’t write it and I don’t know who did. There is information on there that I feel only my mum would know and I have asked her and it’s not her. It’s maybe a little frightening.”

“You’ll be writing a hit Christmas song next,” I said.

“I did write one two years ago,” laughed Laurence. “It was a fairly cynical experiment – to see if you could write ANY Christmas song and then release it on all the channels at Christmas and get it picked up.”

“No. Not really,” said Laurence. “But I quite like it. It’s a cross between Bing Crosby and Paul McCartney. Christmas songs are all that jingle bells, sleigh bells rhythm aren’t they? My song was called called Kith and Kin and I shoved it onto the end of my Lullabies of Pervland album.”

“A Quasimodo-esque hideous evil twin who lives in an attic, watching the family from the rafters, looking down, wishing one day he might be invited to sit at the Christmas table. It’s very sad.”

“Are you sure,” I asked, “that you had your finger on the genre here?”

“Maybe that’s why it never took off,” agreed Laurence.

“Although,” I said, “on the other hand, the Pogues’ A Fairytale of New York is the most-played Christmas song of the 21st Century.”

“And that’s not a cheery subject,” mused Laurence.

“But your new Edinburgh Fringe show is…?” I asked.

“Cinemusical,” said Laurence, “which everyone keeps mis-hearing as Silly Musical, which I don’t mind. But it got introduced the other day as Cinnamon Musical, which I’m not so keen on. It makes it sound even camper than it actually is.

“It’s essentially a one-man musical… a sort of adventure story that consists of music from lots of different genres and is performed by me in the guise of various stock characters.”

“So there’s not one Laurence Owen presenting it?”

“No, no. I appear at the beginning to explain what I’m going to do because, at the first preview, I didn’t do that – just launched straight into it – and no-one knew what was going on. They sort-of enjoyed it but looked quite confused for the first half.”

“Yes,” said Laurence, “but I play five different characters in total, plus myself at the beginning. The first is the Disney character – the only thing I’ve kept from last year..”

“That’s the song,” I checked, “where you analyse the limited career potential for females in Disney movies?” 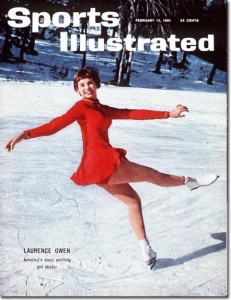 A photograph of the wrong Laurence Owen (Photo: Jerry Cooke)

“Yes. So she begrudgingly resigns herself to being an evil queen on the grounds that it’s the only appealing option. But there is also the bird character she talks to in that song who is now also a character in his own right. The five characters each have a problem, basically, with the limitations of their genre. That’s the framework of the show.

“The characters have a main song each and, in each of those songs, they establish they’re not happy within the rules of their genre.

“The Disney princess character just wants a normal working business life because she’s ambitious and is fed up because she’s got to either become an amicable fairy godmother or die or become evil. The bird is annoyed because he’s only ever allowed to play novelty sidekicks. So, in his song, he’s campaigning for more lead roles for avian Americans. And so on with each character…

“It all ended up, rather by accident, a bit more issues-based than I had intended. But I quite like that. It’s sort-of got a serious point… ish. And they end up quoting Gandhi…”

“Yeah. Well, it’s actually a fake Gandhi quote: Be the change you want to see. It’s a quote often attributed to Gandhi, but I think it’s like Elementary, my dear Watson – it was never actually said.”

“Except possibly by Russell Brand,” I suggested.

Laurence and Lindsay have a marriage made in Disney World

“I managed to go through our entire Disney wedding,” said Laurence, “without telling anybody I had written a Disney parody. I think I told our wedding planner that I was a composer, but never mentioned Disney. My dad kept trying to tell people and I was quite embarrassed. Maybe I should have let him.”

“You also wrote the music for The Golem,” I said.

“The Golem was at the Young Vic, “ said Laurence, “then went to the Trafalgar Studios in London and has been to China and Russia. I don’t know where they are now – maybe Taiwan. They’re touring it all over the place.”

“And after Edinburgh…?” I asked.

Krazy Kat – coming back to a screen with re-scored music

“Well, last year Paul Barritt, the animator, made a load of short films loosely inspired by Krazy Kat – a pre-Tom and Jerry American comic strip about a cat and a mouse. He showed these films in Germany last year accompanied by a very very serious German new music, high Art, experimental orchestra.

“It worked well, but that orchestra are very expensive. When Paul was approached by David Byrne this summer for the Meltdown Festival on the South Bank, Krazy Kat was just too expensive. But then he thought – slightly too late for Meltdown – Why don’t I just get Laurence to do a new score for four players?”

I suggested: “Laurence should have thought of Laurence doing that.”

“I wouldn’t have presumed to ask,” said Laurence. “But we are now going to do that – 90 minutes of film with a live score – after the Fringe.”

A very well-produced video of Laurence’s showstopping Disney parody Empowered is on YouTube:

6 responses to “Laurence Owen, comedy songsmith with a marriage made in Disney World”