Three facts. They are not necessarily un-connected. 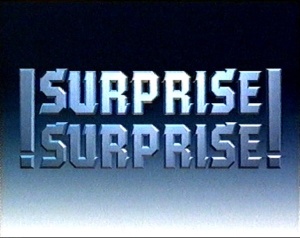 The title sequence from the original Surprise! Surprise! show

– I have always had an irritating cough. Occasionally, I have been nicknamed John ‘Irritating Cough’ Fleming.

– I just arrived in Edinburgh for the annual Fringe Festival. I came up overnight by coach from London, arriving at 7.00am.

The last and possibly (I have a legendarily bad memory) only other time I have travelled on an overnight coach was because of sex. Well, a sex channel.

I was up at the Edinburgh Fringe a few years ago and I got a phone call from London in I think the early evening (I may not have mentioned that have a legendarily bad memory). It was a TV producer saying he could not supervise a voice-over recording session at 9,30am in Soho and asking if I could do it. I suspect he must have offered me a lot of money.

The only way to get there (I could not catch the last train to London) was to get an overnight coach leaving at around 11.00pm, getting into London at around 07.30am and then I could get to Soho for the recording at 9.30am and, about three hours later, go back to Edinburgh.

The voice-over was sexual.

Overnight  journeys can be a real eye-opener

If you watch the satellite sex channels (which I had not) then, between the programmes, there are 10 or 12 minute mini-programmes promoting the ‘real’ programmes. They are ‘voiced’ by sexy-sounding sirens aiming to titillate the tit-fanciers into watching more.

My producer chum had a contract to make these mini-epics and he had edited the pictures for this week’s and written the scripts but, at the last moment, he could not direct the voice-overs this particular week.

So I came down and, with the editor, I directed and he recorded the words spoken in husky, intimate tones by two professional female voice-over artists, one of whom had never done this sort of thing before. Well, I hadn’t either.

She arrived looking wary of both me and the editor, not sure of what her agent had got her into, but we soon settled down into recording and discussions of the surreality of it all. I think her last voice-over assignment had been aimed at encouraging housewives to buy vegetables in a particular supermarket.

This all happened in a basement in Soho with a robust ventilation system and the four of us having (I seem to remember) bacon sandwiches and tea for breakfast.

Anyway, the overnight coach trip down from Edinburgh was fairly civilised, which is one reason why I tried it in reverse this year. The other reason was that it cost £30.60p return and was worth it for the dry-humoured National Express coachman whose patter went way over the heads of the large group of Spanish students last night.

At Victoria Coach Station in London, I got chatting to a girl who was also waiting for a coach. She is studying stage lighting and sound in Lewes on the South Coast of England and she was NOT going up to the Edinburgh Fringe. 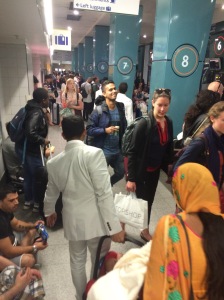 She was actually waiting for a bus to Aberdeen and was getting off at Hamilton on the way up because she was going to meet her father for the first time since she was born. She is 18 years old.

Cilla Black had died earlier that day and I simply thought: What a pity I didn’t meet you when I was researching stories for Cilla’s Surprise! Surprise! TV show.

The 18-year-old girl had a very bad cough.

“No,” she said. “It’s not that. It’s because I had measles when I was a kid and this was the end result. I’ve had it all my life.”

I have had my own irritating cough all my life and I had measles when I was a babe-in-arms. Well, my parents told me I had measles and very scary fits as a baby. I do not remember which came first. I had not yet developed my bad memory. I was a baby. I have that excuse.

So there you have it.

It may not be much.

But that is today’s blog – about how everything intermingles.

It does not get round the fact I am five daily blogs behind. But the joy of the internet is that I can fill in the gap retrospectively, remove this reference and, in the future, no-one will know. 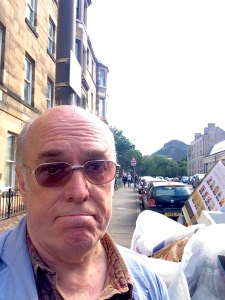 Edinburgh: Arthur’s Seat in the background + some occasional rubbish in the foreground

It is a bit like performing at the Edinburgh Fringe.

What actually happens during shows – you get audiences of two people in a tiny toilet-like venue which seats ten – does not matter.

What matters is what people THINK happened.

FRINGE SELL-OUT SHOW! the publicity will blare-out next year and, in two year’s time, no-one will remember what a disaster it was.

They will be aware of what a success it was.

It is all about perception.