Buddhism, cats and a missing podcast at the Edinburgh Fringe. And a death. 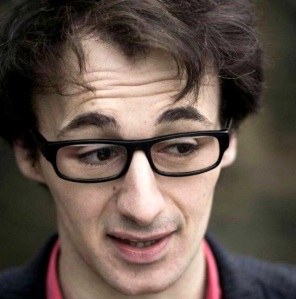 Simon Caine, comedian and host of the disappearing podcast

So, yesterday, I went to see Simon Caine’s comedy show Buddhism and Cats at The Caves in Edinburgh.

Before the show started, I was standing outside, talking to Simon and to Nick Awde of The Stage newspaper. Simon runs a podcast called Ask The Industry where he (according to the website) interviews the most influential people from the worlds of stand up, comedy, writing, TV and radio.

Despite this, I explained to Nick Awde, Simon had recorded a podcast with me. It took two hours back in January this year.

“His logic was,” I told Nick, “I know how I can win an increasingly prestigious Malcolm Hardee Cunning Stunt Award. I won’t run the podcast until after the Fringe has finished… I did tell him this was not going to be an effective strategy.”

Nick Awde often sings opera in the streets of Edinburgh

“The actual idea,” explained Simon, “was that I wasn’t going to run it at all. I was just going to get John round to my flat and tell him about my show for an hour…”

“Two hours,” I corrected him.

“… and,” continued Simon, “just keep plugging my show during the recording and then throw the recording away. That was the cunning stunt. But John said the only way it would work as a cunning stunt was if I didn’t have a podcast to begin with and, unfortunately, I did.”

“Have you thrown the recording away yet?” I asked.

“What else do you throw away at the Fringe?”

“Food,” replied Simon, “Every year in the past, I’ve thrown food away, because I don’t eat all the food I buy.” 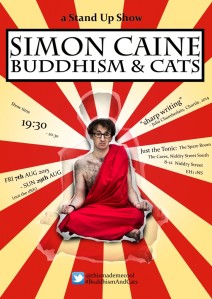 “Well,” explained Simon, “you buy food with the good intention of eating it but, because you end up going out a lot, you end up eating out and you end up saying Oh, I’ll just have cheesy chips for the next five hours and you don’t eat what you’ve bought.”

“This year,” said Simon, “I’ve partnered with a homeless food charity in Edinburgh – the Basics Bank – and talked to Alex Petty of the Laughing Horse Free Festival and he’s getting me a spot at the Three Sisters venue and, at the end of the Fringe, comedians who have food left over which they have not yet opened, can come down and donate it to the homeless of Edinburgh.”

A worthy idea but is it just me who fails to understand the problem?

I have never understood the concept, in this day of 24-hour supermarkets and 0700-2300 corner shops, of storing unnecessary amounts of food in a fridge and leaving it there while the sell-by date approaches and passes. 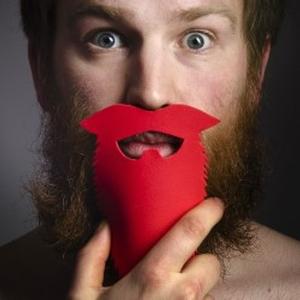 Steve Bennett: Groan Up
Steve Bennett is the English owner and editor of the UK’s premier comedy industry website chortle.co.uk … Another Steve Bennett is an Irish comic with a large ginger beard. I saw the latter. He works. The show works.

The Double Life of Malcolm Drinkwater
Patrick Monahan’s very well plotted and scripted play about a hitman, starring himself, Gary Colman, Lucy Frederick and Archie Maddocks. This could easily be a one-hour TV drama. The slogan of the play is that everyone has secrets. Patrick Monahan is, secretly, a good playwright. He hugged every member of the audience on the way out. He is Patrick Monahan.

Ashley Storrie: A Very Tall Storrie
Ashley first appeared at the Fringe in her own hour-long, very well-reviewed stand-up show aged 13. Then she lost interest. This is her second show. She is now 29. It is mostly about sex and she doesn’t put a foot wrong in the writing and comic performance. A future stage and TV star performer and writer.

Simon Caine: Buddhism and Cats
See above. Despite his inability to post podcasts, the show is very good.

A rare shot of Mark Davison as himself, not as Mr Susie…

Mr Susie: Mr Susie’s Last Chance Cabaret
Mark Davison (aka Mr Susie) was about the only person who came out of this year’s Cowgatehead fiasco with any credibility intact. This show co-stars Jayde Adams and Ali Brice with a musical mash-up (written by Laurence Owen) of Les Miserables and The Wizard of Oz – Les Misard of Oz.

Hanna Winter: Mimi Goes East
I was persuaded to see this because the Cold War story is so interesting: “based on the life of Hanna’s dad, Gabor Varszegi. A Hungarian rockstar. A legend. An absent father in communist Hungary.” This being the Fringe, exactly halfway through, two utterly drunk, very happy and fairly shouty locals came in with the cry: “You’d better be funny!” Hanna carried on, did not go out-of-character, did not lose the attention of the audience, despite the occasionally mouthy female local, and eventually DID lose the drunks, who left without feeling harassed. No mean feat. A great credit to her performance skills.

This morning, I got an e-mail from performer Martin Soan back in London:

Jonty Wright.
Sad to hear Greatest Show on Legs member and Reg Rabbit and the Fast Breeders band member has passed away.

2 responses to “Buddhism, cats and a missing podcast at the Edinburgh Fringe. And a death.”