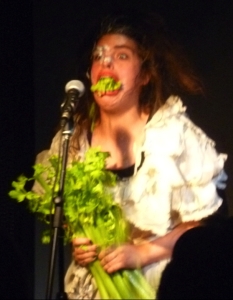 Candy Gigi: one of her more reflective moments

More pigeon news. On Thursday in this blog, I mentioned the tussle performer Adrienne Truscott had with pigeons inside her flat.

She ran out of the shop shouting: “There’s a pigeon in there!  A pigeon!  It’s a really nice sandwich shop!  Don’t let that put you off!  There are not normally pigeons in it!”

On the final Friday of the Edinburgh Fringe, the increasingly prestigious 2015 Malcolm Hardee Comedy Awards will be presented during the annual 2-hour variety show at the Counting House, as part of the Laughing Horse Free Festival.

I got another message from Claire Smith this morning:

Get the naked ballet dancers. They are called The Two Wrongies. They are in Miss Behave’s show. Completely naked except for swim caps and goggles. And they lift up their legs a LOT

As normal, part of the Awards show will be the annual National Scottish Russian Egg Roulette Championships. Or, as some might say, comedians smashing eggs onto their foreheads.

Alas, it looks like the President of the World Egg Throwing Federation will not be there to supervise it. I got this message from Andy Dunlop this morning: 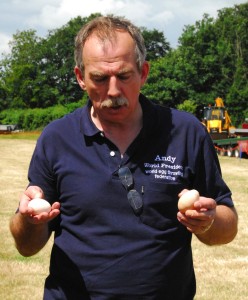 John, as I’m currently lying in the cardiac care unit of Lincoln Hospital sniffing nitroglycerin like there’s no tomorrow (indeed there might not be – so it goes), I am not permitted to promise I will make the trip up to Edinburgh for the increasingly prestigious Malcolm Hardee Comedy Awards Show. My deputy John Deptford is already briefed and is seeking a glamorous assistant for “his show”.

I was admitted to Lincoln Hospital last Tuesday and hope that the intended invasion via my groin into that important and but often mistreated and under-rated piece of muscle in my chest will sort out issues it has recently informed me about.

On a positive note, as per the last time I was unable to attend the show, I will donate my intended accommodation costs to Kate Copstick’s Mama Biashara charity…. as soon as I am able via a proper machine rather than this Kindle. 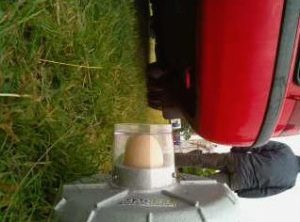 On another issue, you sadly missed the World Egg Throwing Championships this year, but the English Graduated Gravitational Systems project to resupply the International Space Station had a successful test flight at Swaton when we launched our payload via the Eggsplorer 1 craft to 31,500 metres before it suffered a catastrophic failure to land 60 kilometres off Hull. It came ashore in Holland last week with egg payload still intact. The discovering Dutchman broke open the capsule to find that a raw egg does go bad after 6 weeks of floating in the North Sea.

Back on the bubble that is Planet Fringe, the mystery nameless girl mentioned in my blog yesterday, was grassed-up by performer James Hamilton and others as being Emma Levin. I confronted her on Facebook: 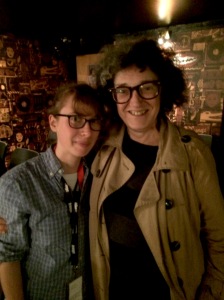 Have you any explanation for the secrecy (for quoting in tomorrow’s blog)? If not, I shall just make it up and ‘out’ you as part of an Oxbridge cabal.

I guess, like a great many people who occasionally perform, I’m incredibly shy off-stage. It’s quite a boring explanation, but at least it’s logical. I know it’s an unconventional situation – someone asking *not* to have publicity during the Fringe –  but I think there are loads of  brilliant performers who actually want and deserve a mention in your excellent blog.

Which brings us to the weird shows I saw on the Fringe yesterday. they included:

James Hamilton is So Lonely
Emma Levin’s ever-weird grasser-upper in his first even weirder solo show after several years creating the weirdness of Casual Violence. I don’t think the time-travelling goggles will save him from the wrath of Emma Levin

The Church of Malcolm
This is billed as “a live rock gig sprinkled with a Kurt Vonnegut like worldview…Like a more positive take on the Rocky Horror Show.” It is the apparently true story of Malcolm Doherty who got leukaemia, saw an angel and is preaching the power of love and music by singing songs with his son on organ, a Brazilian on guitar and guest spots for a full-throttle stand-up routine by Ashley Storrie (children were temporarily removed from the room), a man singing an apparently anti-US capitalism song and a small lady of large proportions gyrating around quite a bit. I was confused. The audience were encouraged to wave their hands around a lot and shout out: “I agree!” 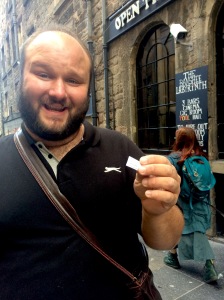 Mark Dean Quinn holds a flyer for his show

Mark Dean Quinn: Observation Without Comedy
Last year’s Malcolm Hardee Cunning Stunt Award nominee in an indescribably odd show with an unexpected monologue at the end. Apparently different audiences react totally differently each night. Last night there were a few embarrassed giggles intermingled with stunned and possibly confused reaction. The potential is there for tears, too. I liked it immensely.

Mark had flyered me in the street before the show. It was a tiny flyer.

“Drawing attention to yourself again?” I asked. “Any drawbacks.”

“Well,” he told me, “the main problem with tiny flyers is people lose them very easily. So, although it drums up loads and loads of interest, it doesn’t necessarily generate an audience. I suppose a tiny flyer generating a tiny audience is appropriate, but I will be making new, bigger flyers next week.” 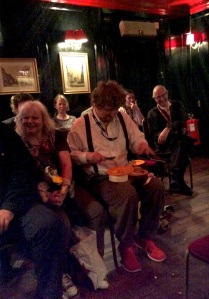 Yesterday was also the first in Kate Copstick and my daily live hour-long Grouchy Club shows at the Fringe.

23 people turned up: not bad for a minor Fringe show – one which did not appear in the Fringe Programme and had no flyers and no posters publicising its existence.

Possibly a lesson there.

And that is just in the brief 11-minute extract I posted online: