I was walking along the high street in Borehamwood at lunchtime yesterday when I saw two little boys pointing bananas at each other like they were guns. As I passed by, all I heard was one saying to the other:

I have no explanation for this. 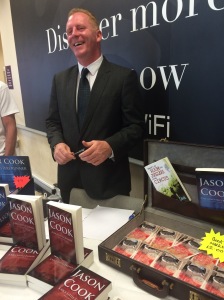 Jason Cook, yesterday. In the case were personalised £50 bookmarks on sale for £2

I was on my way to the local Tesco supermarket to see Jason Cook signing copies of A Nice Little Earner, the third mostly-autobiographical gangster book in his quadrilogy. Jason has cropped-up in this blog a few times before. He is seriously dyslexic but has written three of these books. A fourth is out soon. His first book There’s No Room For Jugglers in My Circus has sold out and is being reprinted on the back of a re-order from WH Smiths. And that’s not even to mention his children’s book Rats in Space. He is a sign that anyone can turn their life round.

I found a thin, paperback-sized piece of yellow plywood floating in the river, with the message ‘E15′ painted on it. I do not think it is a reference to an area of London, but is a marker from a log boom. It has two nails through it, so I might attach it to something.

My phone is still not working despite being inside a bag of red rice. I put the rice bag inside my favorite red hat, but that has not helped.

I also saw a sign today which said: SWORDS INTO PRUNING HOOKS. It was loosely pasted on top of a larger poster advertising a kinky sex party for 400 people to be held on a yacht (location to be announced the day before sailing). It has playpens and cages apparently…. I don’t think I would like to be in a cage at sea with all that going on around me. I could not take a photograph of the poster, because my phone was in the bag of red rice back home.

The streets are awash with pretty, fashionable young women tonight, roaming in packs. It must be something to do with school starting in a couple of days.

One response to “David Beckham and a kinky sex party”