Calvin Wynter was getting medical results in yesterday’s blog

Yesterday’s blog ended with New York theatre producer Calvin Wynter saying: “They called me on Friday which means I think I may have cancer. I don’t know. So far, everything that’s thought to have been cancerous was not – like the polyps I got from my colonoscopy. I had three polyps. No cancer. So who knows? Maybe the third time isn’t so good but, y’know look – I’ve had a shaved head before.”

Calvin has now to come back to say: “My jawbone lesion is benign… Yay!”

In a blog during the Edinburgh Fringe, I mentioned rock star Lou Reed, as portrayed  in the show Transformer. The Fringe show was performed as if in Max’s Kansas City club, New York, in the 1970s. I asked him if he had ever seen Lou Reed perform live:

“I was a teenager going to Bronx Science,” Calvin told me, “living in Queens and spending most of my waking hours in Manhattan. Max’s Kansas City was always an allure. You could drink at 18 in NYC at the time and I was 17 with a very good fake ID. So, when I heard the musicians’ musician, Lou Reed, was playing that night at Max’s, I thought: School work be damned! and, ID in hand, two subway tokens and a few bucks in my pocket, I went to see live what I had heard on vinyl so many times before that the grooves were worn out and I had had to buy a second album of Transformer. 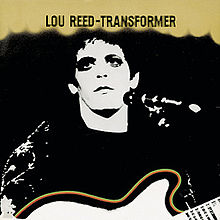 “In performance, Lou Reed was dark and foreboding which captured the energy of New York City of the 1970s. His beat combined with superb lyrics strung together shards of life, glittering dark and sharp. There was very little movement in his performance, but I and the rest of the audience were moved and moving. Lou Reed was simply so good! You were cheek to jowl, but Lou made you feel like you were in your own bubble and only he could pierce it and touch you. By the way, the steak at Max’s Kansas City was great!”

“No, I missed Lou Reed,” he told me. “One summer I lived around the corner across from Andy Warhol’s studio on Broadway and I went into Max’s once but the Velvet Underground were long gone. Weirdly, the drummer from the Velvets – Billy Yule – lived on the corner of the very leafy street in Great Neck I grew up on… in a run-down house with a small fish pond in the yard which I envied as a child. I thought the place was haunted.”

Filed under Music, US

One response to “Six degrees of separation from Lou Reed”