“I can cross my eyes,” Joz said. But he was in shadow.

“Why am I talking to you?” I asked Joz Norris.

“Because I have all sorts of new things I’m doing. This year, I’m trying to do something interesting with context.”

Pay attention, dear reader, because – in this context – often when comics talk about a particular ‘year’, it starts when the Edinburgh Fringe ends in September and ends with their Fringe show in August.

“I think,” Joz said, “that it’s more fun to do a show against an unfamiliar context. So, for the Leicester comedy festival (in 2016) I’m going to do a solo comedy show that takes place in two venues at the same time, both performed by me. I would run from one venue to the other and there would be screens which show each audience in each venue what’s going on in the other one. I’ve got no idea how I’m going to do it. It may fail. But I think it’s an interesting backdrop for a show.”

“You could,” I suggested, “have another comic in the other venue and you keep swapping over.”

“Well there is,” said Joz, “going to be a bit where my ex-wife turns up and we keep missing each other.”

“I feel obliged to point out,” I told him, “that you do not have an ex-wife.”

“But,” argued Joz, “within the canon of Joz-Norris-on-stage, he does. In my show in 2013 I had an ex-wife who, by the end of the show was revealed to be fake. I quite like the idea of bringing her back.”

“A comeback for the fictional wife?” I asked. 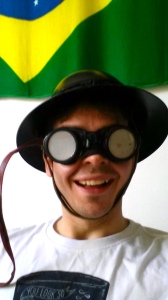 “Yes, I’m doing a lot of comebacks this year. I’m doing a show on Monday called Joz Norris & Friends Present: The Joz Norris X-peerionce. I billed it as a ‘comeback gig’ and Time Out did a listing that said: We don’t understand why Joz Norris is doing a comeback gig, because he hasn’t been anywhere – So I went to live in the wilderness for about three days.”

“Which wilderness?” I asked.

“A wood in or near Wales. I made an art film there about facing death in the wilderness. Because I really faced death. I was on top of this hill and I thought I had enough food to last me a day-and-a-half and get me over Offa’s Dyke and get me to Hay-on-Wye and then I would stock up on food in Hay-on-Wye. But there was fog. I was on the top of Offa’s Dyke and I remembered it was where they filmed An American Werewolf in London. So suddenly I got very scared and then I found wolf tracks in the ground.”

“They might have been very big dog tracks,” admitted Joz. “But they were the big tracks of a big animal. Just claws, really. Claw tracks. So I got very scared. I could only see six feet in front of me because of the fog and then a wild horse came looming out of the mist and I really thought it was a wolf and I was going to die and I ran and then I pitched my tent. I had a pop-up tent. I was so scared I just ate all my food and the next day I had to go home. So I didn’t even make it to 24 hours.”

“You filmed all this?”

“Yes, I thought: If I die there, I might as well do one of those video blogs they find on bodies. But, in the end I was fine, I just slept in a tent, then woke up and went home. So I posted the film online.”

Joz used music from the Incredible String Band in his film, so he gets bonus points from me.

“It was a weird metaphor.” said Joz.

“Not all the time,” explained Joz. “But sometimes I feel like I can’t get to grips with things that you’re supposed to get to grips with. So I was lost and I’m being chased by a wolf. It wasn’t: it was a horse. But I’m panicking and there’s the mist and then it gets dark and then a black sheep wanders out of the mist and leads me to this stand of trees where I can put my tent up.”

“Well, I followed it. If you wanted to read meaning into it, you could.”

“The black sheep turned up,” explained Joz. “A metaphor for me. And led me to a place where I would be safe.”

“That could work,” said Joz. “The Girl Whisperer came out yesterday and it’s doing very well.”

“The Girl Whisperer?” I asked.

“The first in a three-part web series,” said Joz. Ralf Little helped me write it and he’s in it and Matt Lucas and Dara Ó Briain really like it… It’s about me going on dates with girls and getting advice from Ralf Little. So it’s slightly blokey. The next two will be less male-centric.”

“Who are the ‘friends’,” I asked, “in Joz Norris and Friends Present: The Joz Norris X-peerionce?”

“I’m not in it for the money,” he replied. “I’m just doing it for creative growth. Kurt Vonnegut said that doing anything creative is a reward in itself: you can make a face in your mashed potato and you’ll have made your soul grow a little bit.”

“Well-targeted for me with the reference to Kurt Vonnegut,” I said, “but I find it difficult to believe Kurt Vonnegut ever mentioned mashed potato in a creative context.”

“He did,” insisted Joz. “In a letter to some school kids asking him for creative advice. He said: Just do stuff. Make things. Draw a picture of your teacher or write a poem and then destroy your poem and throw it in the bin because, merely by writing your poem, you’ll have experienced something worth experiencing.”

“I heard today,” Joz told me, “that there is a brand of hot dog that they found human DNA in.”

“Is this,” I asked, “because they chopped up a human being to make it?”

“Exactly,” said Joz. “One of them must inevitably slip through into the meat-packing industry.”