Theatre producer Calvin Wynter died. Here he gives his own view of himself.

After yesterday’s blog about the death of Calvin Wynter last Thursday, I thought it might be interesting to post his own view of himself. He ran a fringe/off-Broadway theatrical promotion and production company called Inbrook in New York City.

Below is his own description of himself as part of that company.

Below that is an excerpt from a blog I wrote about him three years ago in November 2012 in which, again, he speaks about himself.

As Chairman & CEO of Inbrook, Calvin Wynter seeks to provide effective oversight and management of the company.

Calvin is an accredited promoter for Adelaide Fringe and The Edinburgh Festival Fringe. He is a judge and industry panelist for The Boston Comedy Festival, New York Comedy Competition and The New York Underground Comedy Festival. Calvin is a regular panelist on the Midtown International Theatre Festival symposiums.

Previously, Calvin was a Managing Director of Corporate Finance at Lehman Brothers, a Vice President at Merrill Lynch in Equity Trading, and was Senior Managing Partner at the investment firm Scarborough & Company, Inc.

His social activism is chronicled in Black Corona the non­fiction best­seller. Calvin serves on the board of the Bleecker Street Opera as the Artistic Advisor.

Calvin studied acting with John Strasberg, member of the Strasberg family, well known for coaching such luminaries as Al Pacino and Marilyn Monroe. 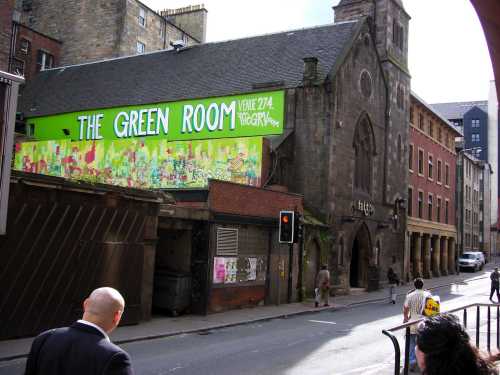 I think I first met US promoter/publicist Calvin Wynter at the Edinburgh Fringe in 2007, when he was involved in opening the new Green Room Venue, but he had been going there since 2004.

Yesterday, he told me: “I went to school in Geneva for a year and I had no idea the Edinburgh Fringe existed. My parents were avid theatre-goers and we were travelling to Europe almost every summer, but they had no idea the Edinburgh Fringe existed. When I was made aware that Edinburgh was the place to go then, in 2004, I went over with five shows. All sold out, were critically-acclaimed and one won the Richard Pryor Award. The following year, Richard Pryor’s daughter went over with us with six other shows.

And now, through his company Inbrook (of which I am an alleged creative consultant) he is staging his very own Fringe Festival – the Brooklyn Fringe, running 12th-21st July next year in New York.

“Are you getting any money from the local council?” I asked.

“This is the American Dream,” said Calvin. “You go out. You focus on being the best. And you are able to create something that serves the public need. It’s a team of performers and creatives that also – almost all of us – have backgrounds in the financial industry. We do it in such a way that it’s self-sufficient. We can’t depend on government. Arts funding has been cut throughout the United States. We are not dependent on public funding or donations or grants. As we see government and foundation funding evaporate… we just create a business model that works for all.”

“Your background is Wall Street,” I said.

“I retired 12 years ago, when I was 40 years old. I don’t need the money. I want to be creative. I want to help artists to grow.

“I was a performer as a child. Even when I was a baby, I was in a commercial for milk. But, when it came time for career selection, I ended up going to Wall Street and, just before I left Wall Street, I found out that I had – without my knowledge – been hiring actors, dancers, comedians. Every member of my staff was in not only one but the three major unions in the United States. Even in the case of members of staff from Britain, they were in British Equity.

“I had been unconsciously surrounding myself  with performers. So it was natural when one said You should pursue this that I went, in less than 90 days, from taking three acting classes to being in one off-Broadway show, in rehearsals for another, doing indie films at the weekend and setting up a production company that would go on to be nominated for a Drama Desk Award in less than 18 months. I leased a theatre – the Gene Frankel Theatre – renovated it, started putting on productions.”

“I was an actor, a singer and dancer. I’ve just got back from producing a show in Amsterdam, scouting theatres in Berlin for touring and being taken to Prague to consult on a musical that was in a 1,000 seat theatre.”

“So you are an actor, singer and dancer who turned producer, promoter and publicist?”

“In one instance,” said Calvin, “we were even involved in producing a show in a car. Two actors in the fronts seats, two audience members in the back. Whether it’s an elevator, a boiler room, a toilet or a 1,000 seat theater we want to see Art.”

“And a businessman,” I added.

“Brooklyn Fringe venue registration applications are due by Monday, 28 January 2013,” Calvin told me.

Filed under Theatre, US