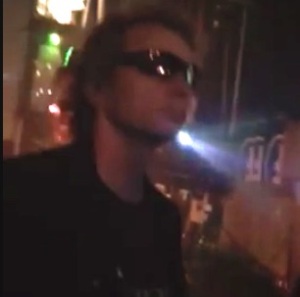 Phil Zimmerman watches the music at the party last night.

Last night, I went to comedian Phil Zimmerman and (I guess you could call him) musical anarchist Nigel Noize’s annual Guy Fawkes Night party in West Ealing. the fact it was nine days after Guy Fawkes’ night is but a minor detail.

It takes place in the small back garden of a very ordinary terraced suburban house.

Well, it would be ordinary except for the fact that the back garden, the loft and most of the rest of the house appears to be a replica of the Glastonbury Festival.

I do not mean a smaller, cut-down version of Glastonbury. I mean the whole of the Glastonbury Festival stuffed into a small terraced house in Ealing.

There is a video shot last night of the loft (with sound) on YouTube.

I blogged about this annual ‘Happening’ last year and this year it was much the same vision of a surreal parallel universe. But with the added delight of music by The Spaceheads – trumpeter Andy Diagram with a drummer – although it sounded like a full orchestra – a combination of looping and using the iPhone attached to his trumpet.

Andy plays in the band James and, last night, The Spaceheads were playing music from their new album A Short Ride on the Arrow of Time. 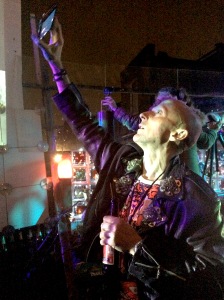 Nigel Noize listens to the sights on his phone

This is possibly the most extraordinary house party in London. Live entertainment, music, comedy, film, poetry etc…BBQ, bonfire, firework spectacular, video disco on giant screens in the garden, fun n frolics till the early hours… Become part of the world’s longest music video ‘Time on Acid’ in the loft, or stumble on something strange in the basement… It’s all the masterwork of Nigel Noize, who has turned his house into a weird and wonderful art object, surely a candidate for the Turner Prize!

That is possibly an under-statement.

There is a short clip of part of one of The Spaceheads’ performances last night on YouTube. But, more than usual, the phrase You had to be there rings true.