Things are on the up. There seem to be a rising number of comedy clubs in London which are not just putting on very samey bills of 5-male-comics-doing-stand-up. There are several now staging genuine variety nights and filling their venues.

Among them are the highly-esteemed Pull the Other One comedy nights in Nunhead and Peckham, the occasional Spectacular Spectrum of Now shows in King’s Cross and the occasional Brainwash Comedy nights run by Ellis & Rose at the Backyard Comedy Club in Bethnal Green.

I saw a Brainwash show last night, headlined by Harry Hill who, although he could be described as a straight stand-up, is considerably more weird than that.

Tom Ward was, I suppose, the genuine token stand-up act. Other acts on the bill were sketch trio The Birthday Girls, Neil Frost (of The Spectacular Spectrum of Now) as moustachioed Victorian ‘Gentleman Johnson’ who ended up in a boxing match with a genuinely feisty girl from the audience, Casual Violence creator James Hamilton in a double character act, Mr Susie only partially on planet Earth and Lipstick & Wax doing a standard but nonetheless astonishing magic act.

So… one stand-up, six excellent variety acts, not a dud anywhere and Ellis & Rose impressively managing to be both effective MCs and constantly anarchic in themselves.

They certainly have to. 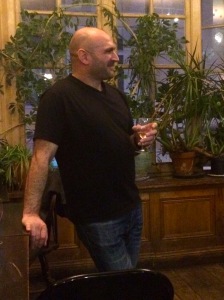 In the meantime, people are preparing potential Edinburgh Fringe shows for next year.

One of the most interesting could be Joe Palermo’s Mémoires of an Italian Stallion.

I saw an initial try-out tonight which took around 70 minutes and did not get even halfway through the story, which involves his somewhat colourful life.

From what I heard tonight and during a post-show chat at the Grouchy Club, I reckon his story might take about four hours or longer to tell – if heavily edited.

It will be interesting to see how this fits into a 55-minute Edinburgh Fringe slot. The briefest of headings would include:

Joe says: “The show at this stage is mainly for a male audience, however open minded women or girls are welcome.”

I told him I thought Edinburgh audiences might crucify him atop Arthur’s Seat for sexism.

But, if his Mémoires of an Italian Stallion show does make the Edinburgh Fringe in 2016, it will surely be an interesting ride.