Tis the season to be jolly – now comic Lewis Schaffer converts to Christianity?

Yesterday, I went to the annual Christmas party thrown by comic Charmian Hughes and husband David Don’t. On reflection, ‘annual Christmas party’ might be tautology. Anyway, a good time was, as always, had by all the tight-packed throng including writer and troublemaker Mark Kelly who insisted I take a photo of esteemed thespian Stephen Frost eating caviar and thus demonstrating he had given up his youthful ambitions to change the world and abolish elitism.

I should point out that the caviar was from Lidl, apparently retails for less than the cost of a Big Mac and comes not from sturgeon but from capelin, a small forage fish found in the Arctic.

I have no idea what a forage fish is, but its slimy bits can apparently legitimately be classed as caviar.

As I left the party, Charmian Hughes gave me a plastic bag filled with bras which, I was told, I had to give to comedy critic Kate Copstick for her Mama Biashara charity. I asked no questions, but I can only assume they are destined for some bemused and heavily bosomed Kenyan women.

There is an oft-used but admittedly here irrelevant Scots saying: “Many a mickle maks a muckle”.

“Many people make mulled wine,” Copstick tells me, “but I’m Scottish, therefore I’m cheap, therefore I make mulled cider, but it’s lovely and it’s still alcoholic and it is absolutely delicious. There will be nibbles and chocolate in almost every conceivable form, plus crispy things, possibly dippy things and cakey things.”

Tonight, I am off to see Lewis Schaffer’s final 2015 performance of a show at the Museum of Comedy – a show that was billed as Lewis Schaffer is Free until Famous, £10… until about five hours before the first performance when, with cavalier disregard for any rules of publicity – like what name is actually on the posters, flyers and listings – he changed it to Lewis Schaffer: You Are Beautiful… a title which could arguably see him in court charged with breach of the Trade Descriptions Act 1968.

Lewis Schaffer says there will be an after-show party and, as he does not care what is written about him provided the words ‘Lewis Schaffer’ are inserted at regular intervals, I can exclusively reveal that Lewis Schaffer will be at the party naked, draped in nothing but a Stars & Stripes flag and he will be singing Jesu, Joy of Man’s Desiring, having last week converted to Christianity. 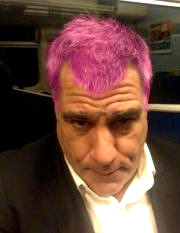 To consolidate this, in the New Year, Lewis Schaffer will be appearing in a stage production at the National Theatre of Goys and Dolls. He may be playing one of the female leads, judging by a photo of him in publicity for Martin Besserman’s Jewish Xmas Eve Matzo Ball Special in which he (Lewis Schaffer) sports pink hair.

We live in a time of flux and this morning I got a Christmas e-card from Arthur Smith comprising a giant picture of himself either as Scrooge or a mullah. If the latter, he – like Lewis Schaffer with his conversion to Christianity – may be hedging his New Year bets.