Bras, a drag king, lesbians and the IRA 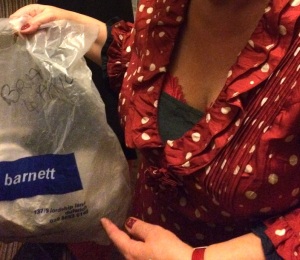 A bag of bras

Just after twilight yesterday, I was rushing to catch a train and was carrying a bag of bras destined for, in my imagination, bemused bosomy women in Kenya.

If you don’t know why, you should have read my blog three days ago.

Crossing a busy road in Borehamwood, I bumped into a lady about my age or older and knocked her over. I didn’t see her; she didn’t see me. Queues of cars in both directions had their bright white headlights on in the black air. She ended on the ground; I dropped my bag. Fortunately the cars were not close enough or travelling fast enough to hit her or the plastic bag.

I would not have liked to explain why I was carrying a plastic bag of bras, though I do try to be supportive in general.

Especially as, after delivering the bras to the Mama Biashara charity shop in Shepherd’s Bush, I was then going to the Admiral Duncan gay bar in Soho. 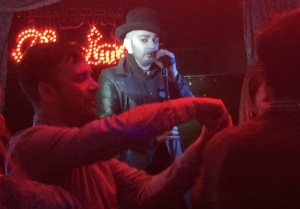 I am not gay. This blog’s South Coast correspondent Sandra Smith had persuaded me to go along with her to see drag king LoUis CYfer host and perform her (LoUis CYfer’s) regular Wednesday night act there. Well, OK, I did not need any persuasion, having met and blogged about LoUIs CYfer just over a a month ago.

I don’t know why I have never gone to gay clubs, as I do like a bit of OTT kitsch and camp.

In the mid-1980s, when I was researching TV shows, I did go a few times to a lesbian cabaret at Oval House in South London, but it was all a bit too cliquey for peaktime Saturday night television. 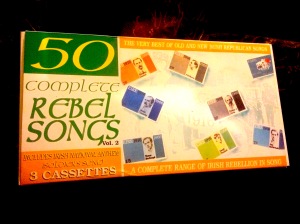 IRA songs and lesbian cabaret seemed to share something…

In Dublin, in the 1990s, I bought a collection of IRA songs to see what they were like and was surprised because so many of them were obviously designed to reassure their listeners that they were not losing.

The Oval House lesbian cabaret seemed ro me to have much the same psychology – inward-looking – We are not alone. We are a marginalised, prejudiced-against group and we should huddle together for reassurance. We are not losing! A sort of covered-wagons-in-a-defensive-ring mind-set. Everything was self-referential and inward-looking to try to build up reassuring self-esteem. 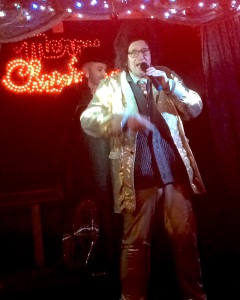 So the Admiral Duncan last night was a very enjoyable surprise. Not an enclave. Not a meat market. Relaxed. I guess (I hope) it is a sign that gay times have moved on since the 1980s.

LoUis CYfer had to battle slightly against a distracted Christmas pub audience. But that is normal in any British pub and club. And she succeeded.

So I guess things are progressing OK.