If you have a blog, you can whine. Yippee!

Occasionally, this has meant I write a blog whining about the disaster that is Thameslink – franchise-holders for the Bedford-Brighton railway line on which I live. Though I have not burdened blog-readers with the daily chaos.

Suffice it to say that, in the evening at West Hampstead station, those in the know do not go to the platform the indicators say the train will be arriving at. Because it is often – or even usually – changed to another platform about 30-60 seconds before the train arrives. One evening, there were 31 people on the bridge, ready to run to whichever platform the train actually arrived on. A Dunkirk spirit of camaraderie broke out.

Which brings me to today’s whine.

So, today I went to see comic Martin Soan at home in Nunhead, South London. No problem there, you might think, because it is on a direct line from my home in Borehamwood and, although today is Boxing Day, the trains are running. I checked on the Thameslink app yesterday. And this morning.

So there could be no problem except a late or cancelled train. This is Thameslink we are talking about.

Last night, I checked on the Thameslink app and chose which train to get. And double checked this morning.

I arrived at my local Elstree station which, of course, was open. Well, the main ticket office was closed but that is not uncommon and the side entrance was open. The platform indicators just displayed a generic notice, but I knew there was a train at 11.12am because I had double-checked the Thameslink app yesterday AND this morning.

Although the platform indicators showed no train times, they did say: For train information please listen to Announcement. And, reassuringly, an occasional loudspeaker announcement usefully told us the Overground was not running; the Waterloo & City Line was not running; and there were some sections of the Underground were closed.

I say We. I had got there early, as had about eight other people, all reassured that the 11.12 was going to arrive. That included two Italians who could speak no English and a Bulgarian who lived in Borehamwood.

It was the Bulgarian who spotted the poster in among other posters halfway along the platform at Elstree which said, about halfway down in among other details that there were no trains running today. No information about this, of course, at the entrance to the station.

The platform indicators remained on. Occasionally, there was the reassuring tannoy announcement that the Overground and Waterloo and City Line were closed – plus helpful details about the Underground, A useful announcement by Thameslink which made no mention of the fact that, in fact, Thameslink itself was not running any trains.

It was the Bulgarian who realised that a scheduled bus (totally unconnected to the Thameslink situation) left Elstree station for Edgware tube station at 11.13.

So we waited (there were about ten of us) until the train did not arrive but the bus did and off we went to Edgware tube station. Well, not all of us.

The Italians who could not speak English had no Oyster travel card and there was nowhere to buy one and the bus driver refused to let them on because, apparently, buses will not accept cash (all they had) any more. 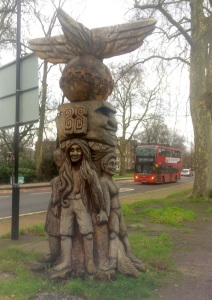 As the rest of us left, six more people were arriving at the station.

I won’t burden you with the details.

I just had to get it off my chest.

Eventually, I got to Martin Soan’s home in Nunhead/Peckham Rye by bus and tube and bus.

He has a nearby totem pole.