Anna Smith on her boat yesterday

This blog’s occasional Canadian correspondent – former exotic dancer Anna Smith – was in hospital in 2013, when she was suspected of being a Marfan.

Anna reminded me about this in an e-mail yesterday:

I have been happily identifying myself as a Marfan since 2013 – happy to have a label at last and have an explanation for my general weirdness and my ‘double ankles’.

Now it turns out that I don’t have Marfan after all, but some different yet-to-be-identified genetic aortic mutation. Supposedly the numbers of aortic mutants are increasing, but I think everybody must be a mutant in some way. We don’t reproduce exact copies of ourselves do we?

Joey Ramone was Marfan. But now I am having to adjust to not being one.

I watched a video of young Marfans being taught to dance, to improve their self esteem. The young Marfans sat on the floor in the ‘W’ position, just like I always have. My party trick (a good way to immobilize a crowded nightclub from the stage), is to kick myself in the head. Everybody freezes for a second and then they shout: “Do it again! Do it again!”

I can only do it with my right leg and sometimes I pretend to knock myself out and collapse to the floor. I used to be able to do this at will but now I can only do it on stage. It must be something to do with adrenaline. Last time I did it was when I was in Chicago, near the El Train loop, but I just kicked my head that time. I didn’t want to fall down in the street. I just did it because I was happy to be there. 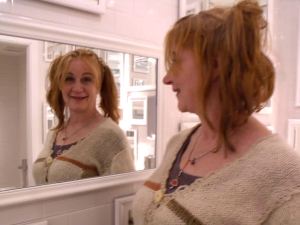 “They put me on an elevated dias-like table. I was propped up”

Last year Derek Human, Head of Cardiology at the University of British Columbia, and some of his students and some genetics counsellors and nurses put me on an elevated dias-like examination table and I was propped up, wearing my hospital gown and I looked down as they asked me a lot of questions about exactly when and of what causes all my relatives had died. They took notes and smiled up at me encouragingly.

I was in the A&E again just a couple of weeks ago. They treat me like a movie star there because I survived an aortic dissection two years ago.

My family doctor told me: ”You are famous at St. Paul’s Hospital,” but I didn’t believe her till I went to Emergency last time. The nurse who admitted me stared and said: “I remember you.”

I didn’t know what she was talking about.

She explained that she had been working the day my aorta started ripping.

Since then, I don’t even have to show my identification. If I’m not feeling well, I just tell them: “My name is Anna Smith. Look me up.” They put a bracelet on me right away and put me on a stretcher. They put me right in front of the nursing station and attach all the monitors. I always enjoy it. Last time there were decorations of large paper candy canes swinging around above their desks.

“I enjoy being in the hospital at Christmas. It is so relaxing”

I enjoy being in the hospital at Christmas. It is so relaxing.

I lay there watching the candy canes swivelling around on their strings and wondered what they symbolised.

They seemed cheerfully at odds with the crucifixes.

Did candy canes represent something naughty? The stripes – Could that be something to do with barber shops? Maybe the red represented blood.

I looked it up on my phone. But No, candy canes weren’t naughty. They were meant to symbolise shepherds’ crooks. They were designed by German priests to keep children quiet during the lengthy Christmas masses.

The doctor on duty introduced himself as Dr Marsden. So I looked up the meaning of Marsden and then read a bit about Marsden Hartley. I knew he was a writer, but he also painted. I spent the next half hour looking at Marsden Hartley paintings, in between technicians adjusting the monitors and taking my blood. I asked my nurse – who was named Vince – if he was having difficulty because of the nursing shortage and he said Yes and that he had been assaulted a few months ago.

Then he went on to summarise the list of current patients for Dr. Marsden. There were six suffering from alcohol poisoning, a young woman overdosing on MDMA and a man who had become psychotic because of drugs he had taken.

I thought ‘pristine’ was a strange word to use. How could anyone say that about me? I think he was trying to reassure me.

A person of moral turpitude?

Last year, when I had a similar A&E experience, the doctor wrote on the discharge paper that I was ‘a pleasant woman’ and I was very surprised.

I asked: “Do you mean I can just go home now, with a piece of paper saying that I am pleasant?”

I got a holiday greeting from a team of activist lawyers in Chicago. They worked on my ‘case’ for free in October, helping make sure I was able to enter the United States for the sex worker summit, because the U.S.A. does not allow persons of moral turpitude into the country. One of their team members is named Nebula.