Back in March 2014, I wrote a blog about comedian Steve Best’s book Comedy Snapshot – a collection of his photos of comedians. Now he is planning a second book titled Comedy Snapshots (See what he did there?)

“The first book acted like a calling card,” he tells me. “It was a good success in the comedy community. Foyles and lots of independent bookshops took it, but not nationwide.”

“There were a lot of comics in it,” I said. “You must have almost run out of comedians by now.” 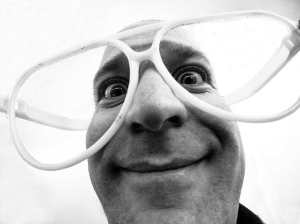 I would not dare use my own photo – A selfie by Steve.

“And you are crowdfunding it?” I asked.

“Yes. Unbound is a crowdfunding publisher – the main guy used to work for Waterstones – and I went and saw the guy and he offered me a two-book deal.

“Unbound have really good links and a relationship with Penguin/Random House. So you produce the book, Penguin have an option to publish it as well and whoever has pledged money gets an exclusive copy slightly different to the one Penguin might create. There are different pledges where you get an e-book, a signed book or whatever.”

“And I’ve now got some links with galleries,” Steve told me, “so it’s become a much bigger project.”

“It’s not really a specialist book,” Steve corrected me. “Penguin look on it as a joke book as far as marketing is concerned. It’s a joke book with a few facts and the photographs. Everyone has given me a one-liner joke. That’s how Penguin perceive it, though I didn’t quite want to go down that route.”

“I had forgotten the jokes,” I said. “I remember the quirky facts and stories.”

“Some of the bigger comedians,” Steve told me, “got a bit tetchy about it, thinking I was going to be using their material but, once I explained what the whole thing was, then they said: That’s great.”

“Is there going to be a third book?” I asked. 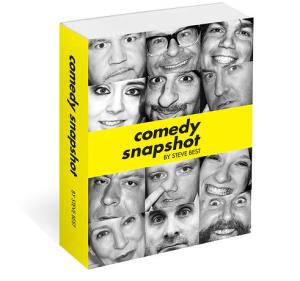 “Yes, Unbound have an option on the next book – it’s a two-book deal. The third one is the book I really, really want to do. It would come out in the summer of 2017, ready for the Edinburgh Fringe in 2017. So I would do a gallery show in Edinburgh – an exhibition and stand-up, which no-one has done – as a photographer-comedian. After that the plan would be, rather than tour arts centres and theatres with a comedy show, I would tour galleries. The idea of touring galleries as a stand-up really appeals to me. You can sell the prints, you can sell the books and do the stand-up.”

“The third book,” I asked. “Would that be the same format?”

“No,” said Steve. “A coffee-table format. Because I’m being sponsored-ish by Fuji – they’ve given me a top-of-the-range camera – my pictures in this new book and the third one will look that much better.”

“So,” I asked, “they liked your first book so much they decided to throw cameras at you?”

“They sent me a top-of-the-range camera and a couple of lenses. I have two bodies and about six different lenses. There is also a possibility I may be going to Mount Everest. There’s a Guinness world record attempt in April for the highest comedy show in the world – at Base Camp, Everest. I might be going out as a photographer-cum-stand-up. In that case, Fuji would supply me with even more stuff. The problem might be it clashes with this new book. I have to design and get this new book out and it clashes. If Penguin really do take it on, I want to get the book out for Christmas.”