Will – formerly Sarah, formerly Will – Franken on drugs and shooting himself

Will Franken outside King’s Cross… via the British Library

When I met American comic Will Franken at London’s King’s Cross station, he had come direct from the British Library where he had been reading original Elizabethan manuscripts. But his new passion is Sir Walter Scott.

“I’m reading the Waverley novels chronologically,” he told me.

“In order of publication?” I asked.

“In order of historical setting. His dialogue is wonderful. I always read them out loud. Even if I’m on a tube train, I’ll whisper softly to myself. It creates an oral-aural link. It comes out of your mouth, goes back to your ear and tricks you into thinking you wrote it, so brings it to life more. I’m going to mention that on the course.”

In a couple of weekends, on Sunday 21st February, Will is tutoring a 4-hour workshop for comedians: I’ll Be Your Mirror: Using the Layering Craft of Mimicry to Enhance Linear Stand-Up.

Last month, he ran one called: From The Classics To The Clubs: Bringing The Rebellion Of Satire Back To Comedy.

“Why are you doing these workshops?” I asked. “A desperate need for money?”

“Nah. I really enjoyed teaching, you know? It was years since I’d done it. I used to do a lot of teaching. We did a brief mimicry exercise in the Satire workshop, but I really want to flesh it out with a new four hours devoted to faces, voices, accents – telling people how to start big and scale backwards, when to go cartoonish, when to do nuance instead of cartoonish. Dialogue’s another important thing. A gruff voice and a sweet little voice and you can get a comic effect out of the juxtaposition of the two.

“Are you hanging up your dress forever?” I asked. 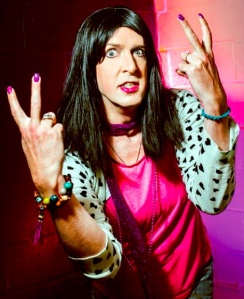 Sarah Franken, now hanging up her dress and wig

For six months last year, Will performed as Sarah Franken, in a dress and wig.

“Yes, but I wouldn’t use that again. It’s all matted.”

“If you got a rocking chair,” I suggested, “you could perform the end of Psycho.”

“I appreciate you treating this with such reverence,” Will told me.

“Have you seen The Danish Girl?” I asked. “Eddie Redmayne as a woman.”

“I wouldn’t see it,” Will replied. “It reeks of trying to get an Oscar.”

“He might get another one this year,” I said. “From cripple in The Theory of Everything to woman in The Danish Girl. That sounds Oscar-worthy. That could be the title of your autobiography: From Cripple to Woman. Have you ever been a cripple?”

“No. I’ve never broken anything. Not a single bone.”

“It might be worth breaking a bone just to get publicity,” I suggested.

“No. I hate pain. Though I shot myself in the toe with an air rifle one time.”

“What was the reaction?”

“I don’t know if I even told anybody. It hurt really bad. It really, really hurt and…”

“You say you think you may not have told anyone about it?” I asked.

“In my family,” explained Will, “if you’re not actually bleeding with a slit throat, nobody really gives a shit.”

“But you were bleeding with a hole in your toe,” I said. 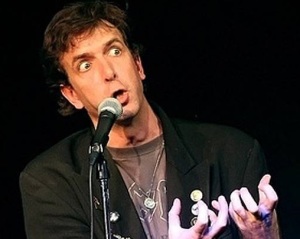 “If you’re not bleeding with a slit throat, nobody gives a shit”

“No. There was no blood. It was a big purple bruise. I was barefoot. It was the summer. It was an air rifle. It was a bruise.”

“You missed,” I suggested, “the key to getting sympathy by not telling anyone.”

“She’s a great study in repression, my mother.”

“What did she tell you when you were a kid?”

“She used to tell me: Make sure you never drink, because your dad’s an alcoholic and you could end up like him. So, when I was 14, I couldn’t wait to drink, because I thought: Wow! I will get to be abusive to people and everybody will feel sorry for me cos I have a disease! Same thing when weed went around.”

“The only drugs I was ever attracted to,” I said, “were heroin and acid.”

“I was never attracted to heroin,” said Will, “though, when I was a kid, I saw the Sid & Nancy movie and I kinda liked the pity. It’s like that David Bowie line: It was cold and it rained so I felt like an actor. There’s something theatrical about it, you know?”

“I was a big fan of LSD,” said Will. “There was no future where I came from in the Midwest – Missouri – so you might as well drop acid. I did lots of LSD and peyote and…”

“That was a brilliant experience,” said Will.

“What is the difference in the experience,” I asked, “between peyote and LSD?” 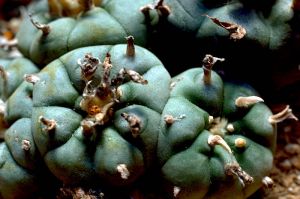 “Well,” Will told me, “the LSD I took was blotter acid, so there was a lot of speed and strychnine in it. I think the peyote was much more vivid. Little cacti buttons; we put them in coffee.

“About four hours into the trip, at its climax, you vomit. That was actually the highlight. It felt so pure. Just opening your mouth and feeling it fall out but not feeling like vomit usually feels. It was like a great emptying and I had an actual out-of-body experience. I think I was 17 or 16 at the time.

“I was with some friends and not all of us were on it. We were all looking at some weird art book. I was there and I was also in the corner of the ceiling, looking down at me looking at the book with everybody else. A complete schism. But I couldn’t do peyote now even if I wanted to.”

“Because I’m an alcoholic and, if I had a trip, I would come out of the trip thinking: Hey! It would be nice to have some weed! Then, if there’s no weed around, I’d think: Well, I might as well get drunk because I can’t stand just naked emotions.”

“But you got wholeheartedly into the drugs,” I said.

”I’m one of those people who likes to get heavily into a lot of things. I was a woman for six months. For a year in 2009, I was a Catholic, but then I sobered up..”

“I was never interested in getting drunk,” I said. “I never wanted to drink to get drunk, which is what people do in Britain.”

“Did you ever drink AT somebody?” Will asked me. “I do that all the time. You think: Fuck her! and then you drink AT her.”

“For me,” Will explained, “weed really freed-up some inhibitions. My iTunes are filled-up with recordings from way back when I was 14.

“I was into 4-track recording when I was a kid. I think one of the reasons I perform in the style I do is I learned how to speed up a pitch and slow it down and do three voices simultaneously when having a conversation.”

“So you have recordings of yourself on drugs as a kid?” I asked.

“Yeah. on some of them I was completely stoned out of my mind. And some of it’s really, really good.”

“There’s gold on those tapes,” I said. “Comedy, narrative and autobiographical gold… Is it OK to quote all this drug stuff?”

“Oh, I’m totally cool about it,” said Will. “All the trans activists who hate me for becoming Will again may go Hey! You know, I was disappointed when he stopped being Sarah and went back to being a man, but he does drugs! … You never know what people are going to like or dislike.”

One response to “Will – formerly Sarah, formerly Will – Franken on drugs and shooting himself”