Kate Copstick in Kenya and in trouble

On Tuesday, I will be hosting the Grouchy Club live in London without co-host Kate Copstick. She is in Kenya, working with her Mama Biashara charity. It helps deprived individuals and groups to start up their own small legitimate businesses to support themselves.

Here is a heavily-edited version of the Kenyan diary entries she has been posting on the Mama Biashara Facebook page. 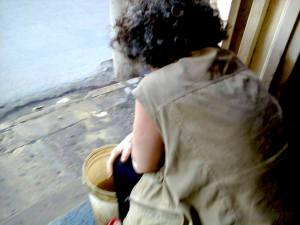 “I am having something of an accommodation crisis.”

I am having something of an accommodation crisis in Nairobi.

Someone told my (Seventh-day Adventist) landlady that I come to Kenya to train people how to be gay. So she has evicted me.

Doris has just about given herself a stroke spending the past few weeks trying to find another place on my budget, which was £50 for three weeks.

When David picks me up at the airport, we drive for about an hour before reaching my new home. It is far out in the geographical, not the John Denver, sense. On the road from Dagoretti Market to Karen. Thankfully not close enough to Dagoretti Market to smell or hear the abattoir. But a real bugger for transport or walking. The room is big and I have a toilet inside !!! My mattress is on the floor and my bucket (now redundant what with the en suite) under a wee sink. Which actually has running water. So, except for the geographical location, it is bloody wonderful.

The place is a sort of a knocking shop… Chaps rent rooms and bring their girlfriends. Or vice versa. The sign on the gate says Home from Home.

As I sit in my new accommodation and look around – bare plaster walls, bare tiled floor, room empty except for my mattress on the floor – I cannot help but think that, if someone asked me where I was, I should say “Ahm in masel”. That translates as “I am in my cell” but also ” I am in by myself” It is not really that funny. But I am cold and damp and it seems hilarious when you are here.

I tell the Pamoja Boys and Martin Sombua about the trip to Samburu. They have heard all about the British soldiers raping local girls. It also happens around Nanyuki, apparently, where there is a big army base. They catch them when they are tending to the animals, or going for water apparently. The other talk is all of civil unrest and ethnic cleansing. There are now weekly demos/riots in the city centre – Tear Gas Mondays they call them. The opposition parties want the wildly corrupt electoral commission reformed. Unsurprisingly, the Government do not agree. Next year’s elections will, I fear, be messy.

I get a matatu to Karen. The fare is 20 bob but, because of my colour, I am charged 30 bob. I get off at The Hub, a new shopping centre.

Most of the outlets in The Hub are not yet open. Which does little to undermine the sheer, gobsmacking, breathtaking, indecent opulence of the place once you are inside. A sweeping palatial staircase leads to a balustraded second level, a massive stone flagged piazza opens up surrounded by porticoed walkways, a jazz band plays and children are riding around on life-size toy ponies which move forward as the child posts (as in a posting trot) up and down on the saddle. I walk through another archway to find fountains playing alongside a boating lake. A BOATING LAKE. Turning left I chance upon a chap who offers me gluten-free artisanal breads. He is part of their weekly Organic Farmers’ Market. There are biodynamic jellies and vegan spreads, organic wines and thoughtful sorbets. I cannot speak. I am in Vegas. It just seems so so wrong.

I meet Doris. She comes back to my cell and picks up three baby dolls for babycare training (we are MUCH in demand) and a load of rubber rings: armbands and beachballs for our burgeoning groups in Mombasa. Amazing to think a lad can make more money renting out Poundland blow up swimming aids than he can renting out himself.

Doris goes and I curl up with my slightly damp blankets and a game of solitaire. In the next room, a baby starts crying. A man’s voice starts to sing something local-sounding. The child continues to whine. And, just as I thought it could not get any worse, the man changes tune. And starts to sing Coldplay’s Yellow. The child likes it. 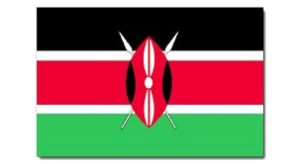 David arrives. His car is in the Sick Car Hospital after a drunk driver hit him head on. He has a borrowed car. It makes a clunking noise in any gear below 4th.

We take a road that loops a little around the town centre in case they have started demonstrating early. The demonstrations are fairly peaceful. The uniformed thugs ‘policing’ them are not.

The Ngong Road looks like a war zone. And it is really. A war between rich and poor. Once the road had wide chunks at the side where people sold flowers and plants and turf and stuff. Then there were newspaper kiosks and snack stops. A whole little micro economy. Under lovely old trees.

The whole lot has been bulldozed. There is some sort of a plan to widen the road so the fat cats don’t have to wait behind a matatu when they are driving to a meeting. The contract will of course be given to the Chinese on a government deal.

No one is ever compensated or offered an alternative. This is money coming into Nairobi and, instead of helping the poor, it is simply forcing them out. Lord knows what they will do to the Kibera people when the road goes through. I now hate everyone in a 4×4 on principle. A radical idea but it is working for me for the moment.

Down on the coast, we are helping the ex sex workers who have destroyed their skin by scrubbing it with household bleach twice daily, I took them E45 and they are hailing it as a miracle. They are able to walk outside without pain (although they shouldn’t), they can sleep and their skin is coming back.

We have a meeting with Margaret – my ex landlady – to see if there is any hope of a rapprochement. I go bearing gifts of cod liver oil, garlic and iron as she is run-down and poorly. She meets us outside the property on the street. She is very nice but explains that, because of what The Scriptures say, they cannot have me living there because, if they help me, it would be as if they themselves are helping gay people. It was Poundland’s coloured and flavoured condoms what did for us.

We leave and even David – who is a Kenyan man and therefore thinks gay men are just ill and gay women don’t exist – is outraged.

But you cannot go against The Scriptures. 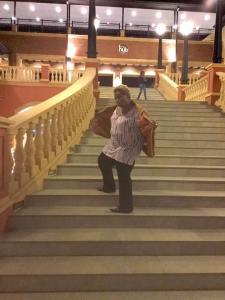 This is the Hub – with Doris, as Sondheim would say, on the steps of the palace…

We head for Ongata Rongai, a big town in the heartland of the area where (President Daniel arap) Moi‘s land-grabbing habit reached its apotheosis. There is enough bad blood between the Kikkuyu and the Maasai to transfuse the cast of Twilight.

The women we are going to fund are the pariah’s of the area – mixed tribe. The sons and daughters of a Maasai/Kikkuyu union. Think Catholic and Protestant marriage in Northern Ireland and you are close. Our women (and men) are working in a stone quarry for a tiny pittance, if they get paid at all. And I am talking about a quid a day. For breaking stones.

When troubles erupt – and they are now – these people are the targets’ targets. We have half a dozen groups and we are meeting at the home of another of Doris’ friends from her old life. This lady married one of her customers. She has a fab house and a huge business in electronics which her husband set up. And when Doris contacted her she has stepped up not just to the plate but to the whole dinner service. She will be overseeing and mentoring the groups we fund today.

Doris and I head back home and stop at The Hub so that I can show her this extraordinary temple to money. We drink a cocktail on the inner square. And gape.

I look the place up.

4 billion Kenya shillings. “Local investors.” Hmmmmm. 30,000 square feet of retail space. And the boating lake. This has to be dirty money. All money this big is dirty here. Interestingly, when I have a look at the local paper the headline tells of 4.2 billion being stolen from the National Youth Service. Money given out to three building companies, one of which was not even registered and two which were registered as business names only.

Sometimes I wonder what the actual fuck I am doing here …

I am meeting Felista who says she has found a place for me to stay that is more convenient. We look at three places. They were a bit like old Gorbals tenements. Or something from Little Dorrit. Not dreadful, but they were no nearer to town than I am now and the fact that by the time we got in the car to go back we had already attracted a couple of groups of men with the look of vampires in a convent made me think that perhaps I am safer where I am.

Doris is in town searching for the little spritzing bottles we need to take to Samburu and arm the local women against sexual attack – hence the chilli vinegar. This simple but effective deterrent worked wonders during a spree of gang rape in Nairobi. An eyeful of chilli vinegar will soon put paid to ideas of, well, anything really.

I am massively stressed at the thought of the trip to Awendo. I think, because I am living in the cell at the back of beyond and everything is taking exponentially longer and the money is running out and I am feeling ridiculously lonely (whine whine whine), the thought of the utter lack of autonomy that there is when I go to Awendo plus the fact that it takes a day to get there and a day to get back and I do not have that time to spare, the volcano of despair that is bubbling inside is fed by this further indication that nothing I ever do will be enough and I will always be disappointing someone.

Copstick’s Grouchy Club Podcast, recorded during the above period is online.

2 responses to “Kate Copstick in Kenya and in trouble”