AIM – The end of the Iceman’s live act? + Van Gogh and the boxing kangaroos

Iceman holds a Christmas card inside the Royal Festival Hall. (And why shouldn’t he?)

At the beginning of December last year, I received 10 e-mails and 22 JPEGs of paintings of blocks of ice from my speciality act chum The Iceman. His stage act involves melting blocks of ice. That is his entire act. I blogged about it.

He said he was now calling himself AIM – Anthony Irvine Man – and suggested I should write a new blog entitled:

Since then, we have had a chat about it. We met in the Topolski Gallery/Bar under Waterloo Bridge in London.

“You told me the man who bought your painting,” I said, “was going to explain why.”

“Yes. He wrote to me,” said The Iceman, taking out a piece of paper. “He says: The paintings of The Iceman are honest, charming and…” 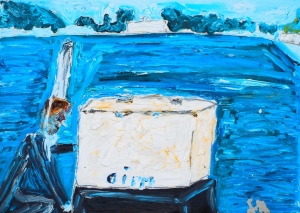 “No,” said the Iceman. “I got him into three figures…The paintings of The Iceman are honest, charming and fascinating. He is an artist whose practice has developed at a glacial rate over a lifetime and each act seems considered but not over-thought. His fixation on ice, the melting process and how that relates to him – his life experience – in a symbolic way – is intriguing and perhaps even deep…

“He wants to buy a second picture. He says: The faux-naïf handling of paint is suggestive of Basquiat or perhaps Dubuffet and art brut. In any case, it is defiantly anti-slick or perhaps anti-consumerist. It is refreshingly populist work, like a kind of ascetically-charged graffiti, piquant piracy, shades of Nolan’s Ned Kelly series.”

“So you are at last being properly considered as a serious artist?” I asked.

“Yes. I feel it’s time to do a proper exhibition. I’ve done about 137 paintings now. They need to be displayed en masse. I have finally found my métier. I think I am just going to keep producing. My subject matter is rather consistent.”

“So are you not going to do live performances any more?” I asked.

“I don’t think so. I never realised I was a painter until this late in life.”

“If Hitler had realised his destiny was to be a painter,” I suggested, “we wouldn’t have had all that trouble.”

“I am thinking,” said The Iceman, “of increasing production: doing one in the morning, one in the afternoon and one in the evening.”

“Won’t that devalue your unit retail cost?” I asked.

“You are right,” mused the Iceman. “Maybe I should slow production down instead.”

“All your paintings are based on photographs?” I asked.

“Actually,” he said thoughtfully, “that might be my next series of paintings. The imagination series. I think I have developed my own style.” There was a long pause. “I don’t know what my style is, but it is recognisable. On my website, I’ve got every painting I’ve ever done. I sold one photo off my website – Block 183 – so, technically, I have sold two pictures: one was an oil painting and one was a photograph.”

“You are on a roll,” I said encouragingly. “How have you survived financially?”

“I work with teenagers,” said The Iceman. “It’s educational work. Helping them realise their potential. But I don’t play football.”

“I have done some odd things,” The Iceman continued. “I did a boxing kangaroo act. I was the referee in a duo with a live kangaroo. Circo Moira Orfei in Italy. She was a fading film star. I had to go round saying Cugino! Cugino! Her cousin was called Filippo.”

“Did you live in a tent or in a caravan?” I asked.

“I lived in a truck with the kangaroo – there was a partition. We had a kangaroo and then collected a younger one from the airport, so I ended up living in the truck with two kangaroos. The poor young one got a lot of rollicking from the older one.”

“How long were you with the kangaroos?” I asked.

“A couple of months. I had to run away on Christmas Day.”

“I had a fracas in the audience and the acrobats were angry because it was at the moment of their ‘death-defying balance’ and so they were all out to get me because I caused them to stumble. I ran away and they ran after me running away, but they didn’t catch me.”

“It’s not their area of expertise,” I suggested.

“I suppose not,” said The Iceman.

“Tell me more about the boxing kangaroo,” I prompted.

“We did the routine in a proper boxing ring and we knocked each other out – the other guy, Filippo, and me – quite a slick physical banging routine. Then I had to get the kangaroo by its tail and drag it into the ring. The first day, one of the roustabouts from Morocco tripped me up and I fell on the kangaroo’s bottom, which got a big laugh. Once the kangaroo was in the ring, I was supposed to give him his mating call and irritate him and dig him in the ribs. Then he gets angry and tries to get hold of Filippo.”

“Because Filippo was teasing him as well and he was more experienced in annoying the kangaroo.  Filippo told me I was too kind to the kangaroo in the ring. The poor thing had boxing gloves on, so it looked like he was boxing but he was trying to grab Filippo round the neck. Sometimes, he would get him round the neck and one of my jobs was to release the forepaws if the kangaroo was really angry. If the kangaroo was really, really angry, he might hold onto Filippo with his forepaws and kick him to death with his hind legs. Kangaroos have very strong hind legs but their forepaws are less strong.”

“You did this job just for kicks?” I asked.

“There was a lot of comedy,” said The Iceman, “because he would kick Filippo and I, as referee, had to tell the kangaroo off.”

“You never got kicked?” I asked.

“Not seriously. His irritation was more directed at Filippo… I have slightly mixed feelings talking about all this. It is quite sad when you think about it. But I was young. The animals I felt sorriest for were the tigers. The circus had elephants who killed some of the people.”

“You toured with this circus?” I asked.

“Not for very long, because I had to run away from the acrobats.”

“When circuses were circuses.”

“Yes. So many animals. Birds, vultures and incredible trapeze artists. There was a clown who played the saw. Every cliché.”

“Why were you working in this circus?” I asked.

“I used to go to clown workshops at the Oval House in London. To me, to be a proper clown in a big circus was my apotheosis. Is that the right word?”

“Because I met the mother of a clown. His father had died in the ring.”

“Killed by an elephant?”

“I have no idea. It seems unlikely.”

“That was your only circus experience?”

“Experimental theatre. In those days, there were a lot of small-scale touring theatres.”

“I have never painted anything without quite a strong feeling.”

“You should paint kangaroos,” I suggested.

“No. Only ice blocks. That’s my genre. To depart from that would spell doom. Each picture I have done is unique.”

“They are all blocks of ice,” I pointed out.

“But they are each unique,” said The Iceman. “I have never painted anything without quite a strong feeling.”

“Quite a strong feeling of…?” I asked.

There was a pause. “I’m not sure,” he replied. “That is a very good question…. Maybe a feeling of bringing something alive long after the event when it existed.”

“That could be it,” agreed The Iceman.

“Let’s assume it is,” I suggested.