Here are the latest (shortened) excerpts from comedy critic Kate Copstick’s diary in Kenya, where she is working for her Mama Biashara charity. It starts in Western Kenya. Full versions are on her Facebook page. 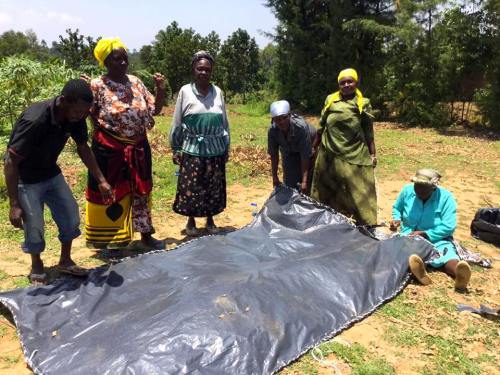 My phone has gone for charging at the one house in the location with electricity. I head to the town pharmacy. Elvis tells me his son is being overtaken by a fungus. The pharmacy has no castor oil. Or anything else to ease a passage. The constipated will have to hold on. No problem for them under the circumstances.

But I do get pediatric cough syrup and reinforcements for the antihistamine and antiseptic creams. There are already loads of people waiting when we get back to Julius’ place and so I get out the boxes and start again. I have already given out 50 tubes of diclofenac gel and we are more than halfway through the de-wormers.

A small boy called Musa is brought along. He is thin, limp and obviously has congenital problems I can’t fix. Most worryingly, he is filthy and dressed in rags while his two siblings who come with him and his Granny are shiny and well and clean and nicely dressed.

I ask the shosho why the mother is not looking after Musa and there is much embarrassed silence. I clean him up a bit and give him vitamins and a drink and lots of cuddles. I tell the shosho I want to see him again. I ask Julius to keep an eye on him.

When they have gone, Julius says he knows the family and the mother “does not care for Musa because he is not a good child”. 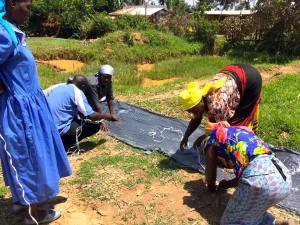 I break off from medical stuff to teach the locals how to make a raincatcher. Of course it is only the women who turn up to learn.

Julius has bought the wrong chicken wire so we first have to sew two strips of the stuff together to make a two metre wide base. Then we cut the plastic sheeting to size and place it on top. The wire is curled round the edge and, again, sort of sewn into place. It is baking hot. I worry about the plastic melting. But it doesn’t. We make ropes out of plaited string and take the whole thing off down to Julius’ banana patch and hang it up over the 1,000 litre water tank.

Then I go back to coughs and sore backs. I am getting slightly droopy as there seems to be no end in sight. A local lady has made mutuya for me and it is in the house to be taken to my resting place for me to eat tonight. But I need something now. It is five o’clock and I have been out here since ten. I feel a break might be in order. I get the mutuya (beans baked in the sun and then cooked till they are a kind of porridge) and discover it to have a salt content comparable to that of the Dead Sea.

So I have some water.

I go inside to talk to four women Julius has mentioned as being particularly ‘down’. They have about 23 children between them. Julius has very kindly said I can give them his underwear consignment (some bought from Eastleigh and some donated by the beautiful and generously-bosomed Friends of Mama Biashara) to start up a business. I will send more for Julius when I get back.

Julius has a traditional mud house. So no electricity and it is pretty much pitch black except where the sun comes through the open door. Which is where I sit.

I show the ladies the bras… some soft, some sports, some underwired but simple and some like nothing that has ever been seen in Western Kenya. 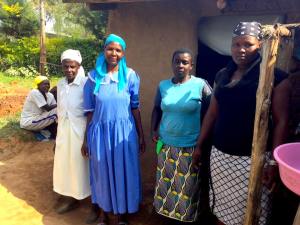 Mama Biashara’s bra ladies – like pilgrims at the Turin Shroud

They fondle and wonder. And when I tell them some of these bras can cost 5,000 shillings they gaze at them much in the manner of a pilgrim at the Turin Shroud.

They will sell them from a space in the market on the two market days and go around hawking the rest of the week.

I cannot explain how much joy and hope three bags of bras and a large bag of knickers (various) can bring to needy women.

I ask Doris to put some cream on my neck and shoulders.

“That is what happens when wazungu go in the sun.”

She pokes at my pink.

But still smears on the gunk and tells me the good news. 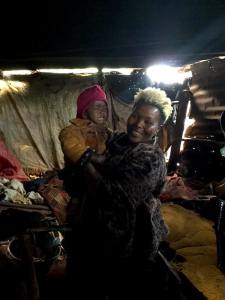 We have had FANTASTIC feedback from the medical days we did at Gikamburi. Best of all, women have been telling Doris of the revelation of cooking with the stove outside. No smoke, no fumes, no congestion, no coughs, no snot, no sick children, no limp babies. They are telling Doris that even the men are commenting on how well they feel. FINALLY we have got through to people. And now, the word is spreading.

Doris has already been approached by women from two nearby villages, lured by tales of my ability to cure. Gikamburi ladies have been enthusiastic in their delight in life minus heartburn, constipation, aching backs, swollen ankles and all the nastiness that smokey houses brings. Tonsil lady still needs them removed but they have calmed down for now and all the rashes and lumps and bumps are responding really well to whatever goo I gave.

I feel quite Gregory House.

We pick up 80 litres worth of detergent perfume for Julius (turns out that when he said the perfume had “gone off” he did not mean gone bad; he meant evaporated). We hit the pharmacy for antifungal eyedrops for the boy in Kahuho and antibiotics for Damaris in Western, plus a gallon of castor oil for the goat people.

Then I change what money I have left only to find the exchange rate has plummeted. WTF people!!!! Every penny counts to some of us !! 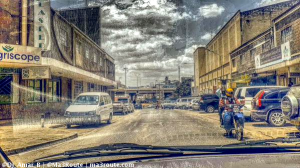 Kijabe Street, Nairobi – not somewhere to park a 4×4 vehicle

Thence to Kijabe Street where I am picking up a consignment of dresses from Monica. Her car has been clamped by one of the little shits around the parking area. I know why. It is a big flashy 4×4 and they obviously smell money.

I collect from everyone I can and desperately try to avoid spending any money. I have changed my last thousand but almost all of that will go on the cargo costs on Friday. I also hand out a load of our education leaflets in Swahili, Luo and Kikuyu. Market people are little people, generally, and need this information.

Now we go back to Eastleigh. Having given away Julius’ stock, I need to replace it. We cross our fingers that hell will not have been unleashed today.

Everything is pretty quiet. Although there is a truck of fully armed, flack jacketed and helmeted soldiers at the top of the street. They are doing a bit of stop and search.

We get in OK and Julius gets his knickers but, on the way out, we are stopped.

A ridiculously macho soldier in full combat gear indicates we should come over to the kerb.

“Where have you come from?”

He is not amused.

“From buying bras and panties in Eastleigh to send to Western.”

“You have a business there??”

“Ah. So if you are a charity what do you have to give me?”

I wonder if he is joshing.

Probably not. The ‘josh’ content in this kind of conversation does not tend to be high.

“I can give you some advice… Be nice to people, do not be unnecessarily violent and perhaps you could take some of your colleagues to Samburu and sort out the war that is happening there.”

He leaps back as if stung.

“I cannot go to Samburu! The people there are crazy! My colleagues cannot go.”

We shake hands and drive on.

David is in hysterics:

“You have confused him so much!!” 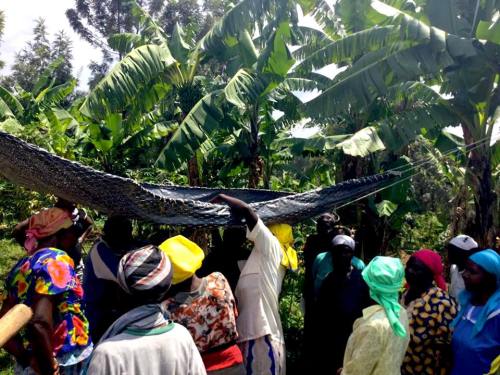 No-one takes any salary from Mama Biashara and Kate Copstick covers 100% of her own expenses herself. She takes no money from the charity nor from any donations to the charity. 100% of all money donated is spent on the charity’s projects.

Donations to the charity can be made HERE.