Martin Soan and Paul Vickers before a Pull The Other One

Martin and Vivienne Soan have been running Pull the Other One comedy nights in Nunhead, South London, for over ten years. The shows are monthly. You pay to enter; and, in my opinion, they are always value for money whoever is on the bill.

Pull The Other One is at the Ivy House in Nunhead; It’s Got Bells On is at the Old Nun’s Head in – you guessed it – Nunhead.

Martin has always paid acts to perform at It’s Got Bells On, though entry has been free for audiences. From this Friday, though, Martin is going to charge £3 entry.

“Why?” I asked him a couple of weeks ago, before a Pull The Other One show.

Also sitting at the table, mute, was Paul Vickers aka Mr Twonkey.

“Do you want to say anything surreal?” I asked Paul.

“So,” I said, turning back to Martin Soan, “why start charging entry?”

“Well,” said Martin, “I started It’s Got Bells On because I was getting a little tired of putting on stuff that sells. If I book a big name like Alan Davies or Omid Djalili or Stewart Lee at Pull The Other One, people will happily pay to come along.

“If I don’t have a big name, people won’t come along in such big numbers, Which is very frustrating because all the shows are always consistently good. (Martin tells the truth here.) It doesn’t matter who is on, the shows are worth the same ticket price. The fickle nature of the public, though, is that more will come along if they see a name they recognise. And, because the audience is paying, the acts feel they have to deliver risk-free performances.

“So I wanted to have a free-to-enter evening which would allow acts to be more anarchic and experiment more without worrying about the possibility of failing. I could also feed off It’s Got Bells On and transfer acts tried-out there into Pull The Other One.

“What happened was that the first few months of It’s Got Bells On were incredibly successful. I didn’t realise at the time why, but the (mostly South London) acts I was putting on were bringing along lots of friends. But then, when I started having acts on from North London, they didn’t bring friends and I had only 20-30 people coming in, which was disappointing.”

“Why,” I asked, “would charging get you bigger audiences?”

“People have been talking to me, saying: I didn’t want to come along because it was free so, obviously, it was not going to be very good. Which isn’t true, but that’s what they think. So I thought: Right, fuck it. We will charge the audience, but all the ticket money will go directly to the Clowns Without Borders charity. 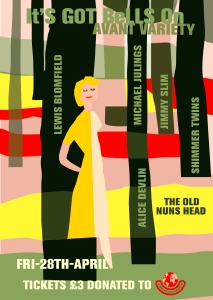 It’s Got Bells On – £3 this Friday in Nunhead

“So the people who won’t come to free shows because they think they will be shit may come to this pay show because they assume it will be better. But we will keep the essential elements of It’s Got Bells On – freedom from having to do risk-free comedy and allowing people to experiment. And I will still (as before) pay everyone £20 to perform. So it’s good for the performers and hopefully now people will start taking it a bit more seriously because there’s an admission fee (which goes directly to Clowns Without Borders).

“I’m still gobsmacked by the attitude of audiences out there. People have got these boundaries of what they will allow themselves to experience. If the performers have been on television, then that’s OK. They will come. At Pull The Other One, invariably, when we have really big names on, we will put acts either side who are completely nuts and the audience will come out saying: I loved the Big Name but that guy who did the blah blah blah whatever – I REALLY, REALLY loved him!

“The whole idea of It’s Got Bells On was to be free so acts feel no pressure not to fail… but I have never known an act to fail there. Generally, if you get up and do something new, then your adrenaline and determination will carry the whole thing through.”

Martin Soan decided not to have bluetooth

“Why do you have a green tooth?” I asked. “That wasn’t there before.”

“I wanted bluetooth to communicate better but I got a green tooth instead.”

“Ah,” I said. I turned to Paul Vickers aka Mr Twonkey. “Do you want to say anything surreal?” I asked.

Paul lives in Edinburgh but had come to London to appear in various shows.

“Are you staying with Lewis Schaffer?” I asked.

“No. I’m staying with Martin here. That means I won’t have to do the book.”

“You remember I told you about the book?” Paul told me. “I Can Teach You How To Read Properly by Lewis Schaffer.”

“I do have a pop-up Kama Sutra,” he replied.

“A pop-up Kama Sutra?” I repeated.

“Yes. You open the pages and figures pop up fucking each other and, if you move the pages correctly, you get the penis going in and out.”

“How much did that cost?” I asked.

“It was 15p from a charity shop in Peckham.”

“That must be an interesting charity shop,” I said.

“It was in the children’s section.”

“Why?” I asked. “Just because it was a pop-up book and they assumed it was for children?”

“I suppose so,” said Martin. “I don’t think anyone had opened the book and looked inside.”

“Do you want to say anything surreal?” I asked Paul.