How to alienate an Edinburgh Fringe audience with mis-conceived videos 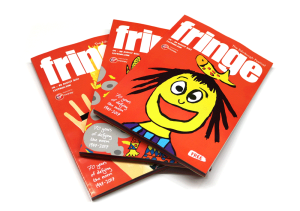 Yesterday’s blog was about things which could be wrong in an Edinburgh Fringe comedy show’s script but which can be changed even at a very late stage.

Today’s blog is about something it is less easy to sort out.

AND IT IS BLOODY ANNOYING!!

But one thing I remind them – rightly or wrongly – is that the real reason performers flock up to Edinburgh in August is not to fill seats with money-making ‘real’ members of the public (most performers make a loss) but to be seen by the media and the showbiz industry.

Many years ago, I was up in Edinburgh with one act who was unknown at the time and was getting virtually no audiences. He was talking about giving up and going home. I told him not to. One night (when I was not there) he had only four people in the audience.

But it turned out that two of them were TV producers looking for talent for a new series they were preparing. He was booked for two full runs of a BBC2 TV series.

Oh, alright, it was Charlie Chuck and the series was The Smell of Reeves and Mortimer where he performed as the Charlie Chuck character but was called Uncle Peter.

Another time, I turned up to see an interesting-sounding show at the Fringe. The only audience members were me and another man. But the two performers had given up a few days before and gone back to London. I was looking for acts for a Channel 4 TV show. The other man was a BBC Radio producer. We never saw the show or the performers.

It is not the number of bums-on-seats that matter… It is whose buttocks they are.

30 ‘ordinary’ punters in an audience cannot make you famous.

One person in the audience could make you a millionaire and the biggest thing in British entertainment.

Though not if it’s me, obviously.

It is all smoke and mirrors.

I remember several years ago, one act who was hot, hot, hot. He is now a known Name comedian. Everyone was talking about his Fringe show that year. It sounded massively successful. And it was. But, when I went to see it, he was performing in a small shipping container. Perhaps there was room for 30 people in the audience. But the right people had seen the show and the word-of-mouth was massive. I repeat:

It is not the number of bums-on-seats that matter… It is whose buttocks they are. 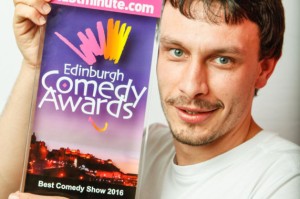 Richard Gadd clearly did it right at the Edinburgh Fringe

In 2015, Richard Gadd was booked into a venue in Niddry Street that turned out to be too small when the word-of mouth about his show Waiting for Gaddot became massive. People were getting turned away every night, which just fanned the flames of the word-of-mouth.

In 2016, he was nominated for an increasingly prestigious Malcolm Hardee Cunning Stunt Award because – now much much better-known and guaranteed to sell out a much bigger venue – he had booked himself into the same small venue on the basis that even more people would NOT be able to see his equally superb show Monkey See Monkey Do, thus making himself and the show even hotter.

At least, that was the story. It might have been bullshit to get nominated for a Cunning Stunt Award. But, if it was untrue, that was a successful Cunning Stunt in itself.

But, as a result of this, an appalling habit has crept in over the years.

They started, I think, because people wanted to demonstrate to TV producers what fine comedy sketches they could do if given a TV show.

That was bad enough.

BUT, OH COMEDIAN OF LITTLE SELF-BELIEF, YOU ARE SUPPOSED TO BE PERFORMING A LIVE STAGE SHOW, NOT SCREENING A SHOWREEL!!!!

It has now got worse than trying to demonstrate TV sketch performance potential on stage via pre-recorded video clips. Comedy performers are now willy-nilly bunging pre-recorded videos in their solo shows, having ever-changing stills backdrops and all sorts of appalling visual distractions.

This CAN work and it CAN be relevant.

In Richard Gadd’s aforementioned, rightly-acclaimed 2015 stage show Waiting for Gaddot, the conceit was that he was not there. The pretence was that he was late for the billed show and other people performed while waiting for him to arrive – and this was interspersed with make-believe-live video clips of his various problems trying to get to the venue. Eventually he did arrive and he ran into the venue just as the show was about to end.

In that case, the video clips had a very well-thought-through purpose which was part of the cleverly-conceived format of the show.

But, mostly, comedy performers – an insecure and neurotic breed at the best of times – witter on about wanting to add ‘production value’ to the show and how just watching them stand at a microphone talking for 55 minutes would be dull for the audience. They want to make the show “more interesting” 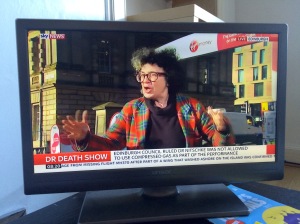 One thing you definitely don’t want in your show – feared comedy critic Kate Copstick commenting via a video screen. (In this blog, this is an example of an irrelevant distraction.)

Adding videos to the show is not ‘adding production value’, it is distracting the audience and interrupting their concentration. Every time you show a video or a series of stills to ‘add production value’, the audience has to switch attention from the performer’s face to a TV screen of totally different luminosity. Their visual focus literally shifts and their ears have to re-tune to a different type of sound wave. And sometimes there is also a lighting change involved to further distract their concentration.

It destroys whatever momentum the performer has built up.

The audience, who have been (or should be) intent on watching the performer’s face and listening to his/her carefully-crafted spiel, have to mentally switch off and re-tune to the ‘other’ (pre-recorded) video performance or visual.

At the end of that, they have to mentally, visually and aurally re-adjust back to the performer. Literally change their focus, literally re-adjust to a totally different visual display.

Every time the performer stop/starts his/her performance, the momentum is stop/started and the audience’s concentration diluted or lost.

Also, the audience must inevitably have at least a slight thought in the back of their minds: I came here tonight to see a live comedy performance. Why am I sitting watching a TV screen/projected image that has been pre-recorded?

And, while they are watching this unexpected interruption, they are half-flicking their attention every now-and-then back to the performer who is just standing around like a wanker doing nothing or – God forbid! – has walked off-stage for the duration of the clip.

The audience will and must think: Hold on! Am I watching this because the performer doesn’t have enough confidence to risk doing it live and has pre-recorded it? Or: Is the performer not talented enough to entertainingly describe in fascinating language what I am watching?

I am not a performer. I can show you a video of a monkey juggling a meringue and get laughs. A talented comedian can describe it to you and get even more laughs.

Every time I have to sit through bloody video clips in a live show in which the performer stands to one side and scratches his/her nose/anus, I start to wonder: If this wanker can’t perform the whole show live, why not just record the whole thing, email the video file to me and I wouldn’t have to come out on a wet night, have my luxuriant hair half-blown off by the wind and be shat upon by giant seagulls with attitude problems! (This is Edinburgh, after all.)

These annoyed and annoying thoughts will also, most of the time, be shared by the TV or (God help them) radio producers whom the performer most wants to impress. 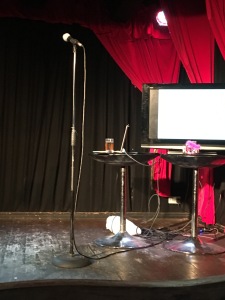 If you don’t think you are interesting enough to hold people’s attention in a 55 minute live show, just don’t go to the Edinburgh Fringe. (This is another distracting picture.)

If you are trying to demonstrate what a good writer and live performer you are in front of a live audience on a stage, then don’t go multi-bloody-media luvvie unless it is vital to the whole caboodle (like it was in Richard Gadd’s show).

If you are a sketch group, don’t bloody have me sit in a darkened room in Edinburgh watching you being clever in Take 13 of some video you pre-recorded in a London park four months ago. It’s not big, it’s not clever and it’s not going to impress me. If you can’t think of an entertaining way to perform sketches live on stage in a room in Edinburgh, then don’t go up there and go get a job stacking shelves in a supermarket.

If you can’t do 55 minutes of straight-to-the-audience stand-up material then (unless you can make it VERY original and an integral part of the live-to-the-audience act), don’t have video inserts. Just do a bloody stand-up routine entertainingly. Or send a showreel to Netflix or Amazon or BBC3 or put it on YouTube. Don’t inflict it on me, sitting on an uncomfortable chair in some annexe to a church or some student lecture room draped in black curtains in Edinburgh.

I could be watching re-runs of old Tommy Cooper shows instead.

Of course, if you take all the advice above, you will never be nominated for, let alone win, an increasingly prestigious Malcolm Hardee Award For Comic Originality.

Life is a bitch.