Arranging the increasingly prestigious two hour annual Malcolm Hardee Awards Show is forever like juggling spaghetti with people dropping in and out of availability and not quite saying what they might be doing.

The good news is that I can never fail… so far.

If it falls apart, then it is a fitting tribute to Malcolm’s anarchic ways.

As I arrived for the increasingly prestigious Grouchy Club at the Counting House Lounge this afternoon, manager Brian – whom Kate Copstick has decided to call ‘The Comedy Concierge’ – was sitting at his barrel, talking to Cheekykita who was, of course, dressed in an impressionistic lobster costume…

Inside, Phil Chippendale and his stitches arrived again, this time hidden under a plaster, which he raised for photographic effect. Later, Malcolm Hardee Award Show host Becky Fury practised her mind control technique on Phil.

The revelation of the Chippendale stitches 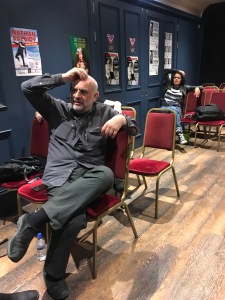 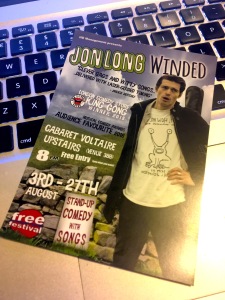 Complicated rhythms and tsunamis of words

After that, I had time to see Jon Long’s show Jon Long Winded.

I know him as a strong comic song performer on the London comedy circuit, but he turned out to be even better at length (45 minutes) in a totally crammed upstairs room at Cabaret Voltaire.

Very very warm audience spiel… very complicated musical rhythms and tsunamis of words… and a glimpse of a sad Fringe-style confessional-type story in there hidden by the warm spiel. Well worth seeing anywhere.

After leaving Cabaret Voltaire, in Cowgate I bumped into Nathan Cassidy, a man who could easily have been broken by his tragic Malcolm Hardee non-nomination this year.

But he instead suggested he could take over the Awards from next year and might, he implied, change his name to Nathan CassHardee to facilitate this process.

The jury is out on that one.