In Canada, they are giving away marijuana – free to the needy

This blog’s occasional Canadian correspondent Anna Smith has suggested she could send some marijuana honey to me – for the cough.

But I have never taken any illegal drugs, so I am not interested.

I have never smoked nicotine cigarettes, yet I have a smoker’s cough.

I don’t drink, yet I have a beer gut.

I never smoked weed, yet my memory is shit.

Proof, if proof were needed. that there is a God and he has a dark sense of humour.

Meanwhile, in Vancouver, Anna tells me: 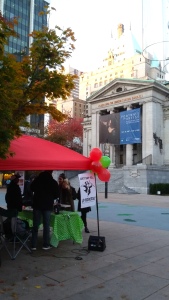 The Society’s free stall in Vancouver

People are upset with the federal government as Prime Minister Trudeau was elected on a legalise marijuana platform but hundreds of people have since been arrested for selling it.

Still, it seems as if half the people in the country are growing it and, in British Columbia, it seems everyone knows at least ten people who are getting into the business.

One anti-Trudeau group – the Canadian Cannabis Compassion Society – gives it away free to the needy; others are encouraged to make a cash ‘donation’ in exchange for the dried herb or THC-infused jelly candies.

Elsewhere, companies like Reakiro are touting the benefits not just of medical marijuana but hemp as a commercially-viable building material… surely an incitement to arson. 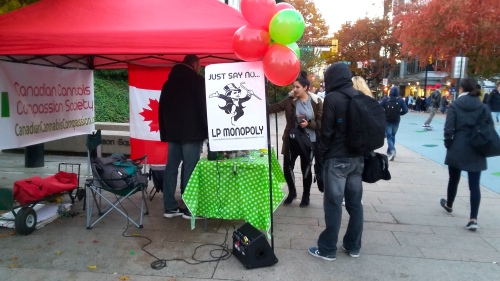 One response to “In Canada, they are giving away marijuana – free to the needy”