Kate Copstick in Kenya: “There is an odd failure to report this in the papers.” 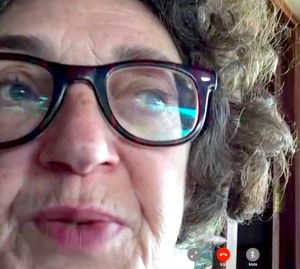 Journalist Kate Copstick is currently in Kenya working with her Mama Biashara charity, which gives small sums of money and advice to poor people so they can set up their own small, self-sustaining businesses which will allow them to help themselves out of poverty.

Copstick and Mama Biashara make no money from this and 100% of all money donated to the charity is used for the charity’s work. Copstick works for free, receives no money herself and covers 100% of her own costs.

She keeps a diary which she posts in full, when possible, on her Facebook page. These three (edited) extracts from last weekend give, I think, a fair idea of the background within which Copstick and Mama Biashara have to work.

Doris calls with news from Kisii. Yes, we are STILL trying to find a way to help the women hiding out in Kisii County (as mentioned in previous blogs/diary extracts).

Good News: between Vicky and themselves, they have found some farmers and villagers who are not tribalist to the point of violent criminal insanity and who will give them jobs. That is about thirty of them with at least a life-raft to cling to.

Bad News: there is a something between a gang and a sect with absolutely the worst aspects of each which operates in Kisii. They are called the Chinkororo. They rule the place. They arrived in one of the decent, helpful villages a couple of days ago, called everyone together, pointed at a random woman in the crowd, declared her to be a witch, doused her in petrol and set her on fire. While everyone watched. Pour décourager les autres, one assumes. If, say, a screaming, terrified child tried to run away or even look away, one of the gang would hold its head and force it to watch. Until the woman died screaming and squirming.

Vicky was sent this on a smartphone video.

Doris saw it and is still traumatised. Doris is not traumatised easily.

There are a lot of silences in our phone call.

Then I get a call from Joan, wondering where I am.

“Still sick?” She worries. “It can be malaria.”

She has some good news, though. Earlier in the week she had called me about a girl – just newly eleven years old, raped when she was 10 and now pregnant. She wanted to know if we could find a doctor to give the girl what is generally referred to here as a ‘wash and blow-dry’. The wonderful… er… hairdresser… who had helped some very young girls for us before has moved to Turkana but it seems Joan found one herself. The girl is now great, and currently home with her mother.

We are getting increasingly worried about Oliver, the marvellous Mobile Phone Whisperer who was going to spearhead our training of young women in mobile phone repair. I had asked that he come to Nairobi to meet with me so we could discuss things properly. Despite all warnings from Vixen and Doris, he went to stay with some friends in Huruma – a scary place at the best of times but, with all the political nastiness still happening, now properly dangerous.

We heard, via Vixen, that, in a night of the kind of ethnic cleansing that happens in places like that at times like this, Oliver had been beaten up while trying to leave the slum. Oliver is Luo. That is all that it takes to get you beaten up. Or worse. He went into hiding and has not been heard from since. It is a nightmare. Huruma is not the kind of place you go wandering around looking for a lost mate.

Doris wants to come over and pick up some headed letter stuff that I set up so we could give people letters of recommendation. Vixen has found jobs for about twenty women in a resort in Malindi and it looks like this could be the start of an ongoing relationship with the owner, who knows the backgrounds of our ladies and is happy to give them a chance, a good training (hotel and kitchen staff) and a really good salary. But he wants a letter of recommendation. Kenyans LOVE letters, certificates… anything on paper.

Plus Doris wants to talk.

There is still no sign of Oliver, but what is emerging is a huge community of mums and wives who are searching for young men who have simply disappeared across areas like Huruma and Mathare. Every other day a body will turn up in some place far away, the other side of Nairobi and a flurry of hope/dread will stir. So far, no Oliver.

Luos are being kicked out of Kenol (on the outskirts of Nairobi), says Doris. They just get a visitor in the night who tells them to go or suffer the consequences.

Kabiria (where Joan lives) is on a knife edge.

Kawangware has sporadic outbursts of what can only be called ‘ethnic cleansing’. Things are not happy.

But there is an odd failure to report any of this in the papers.

I think if people were really looking, they would find that just as many people are being killed now as were killed in the 2008 riots. It is just being managed more carefully this time. Kept sporadic, geographically spaced out. Just young men disappearing from slum areas… who just happen to be Luo. The sixty odd in Kisii who disappeared while Vicky has been up there have not reappeared. People are now looking for a mass grave.

Talking to Doris again I remember that I never DID tell you what she wanted to talk about on Friday.

We have been approached about all manner of domestic and sexual abuse. But nothing like this case. And it is all the fault of UK Kink.

We are talking to the extent that, before he leaves in the morning, he ‘marks’ her by pissing on her and she is not allowed to wash it off. Oh yes. Because she was so innocent when he married her and is so controlled by him, she thinks this happens in all marriages.

Only now, because he left his browser open and she saw some of the pages he likes, she has she begun to realise what is happening is not normal.

We are going to meet up with this woman and see how she wants to proceed. I am thinking a day in a dungeon with the CopMistress and no safe word.

Great news from Brian. Mama Biashara’s Special Condiment has been VERY popular with the ladies of Homa Bay. A refuge for abused girls was suffering regular break ins by state police who would stop off on their way from the pub for a quick rape of some already abused and vulnerable girls. A full face of Mama Biashara’s Condiment is a surefire way to distract a man from any planned action in the jap’s eye area to the searing agony in his other eyes. Production is underway, so that all the women can be safe. Well, safer.