Kate Copstick – lies on the fly in Kenya

British comedy critic Kate Copstick founded and runs the Mama Biashara charity in Kenya. She spends getting-on-for six months a year there. She takes no money from the charity and covers 100% of her expenses out of her own pocket. She flew to Kenya at the weekend.

These are edited extracts from her diary, which she posts on her Facebook page. The videos below are taken from YouTube by me to give an idea of the areas. They are not by Copstick. 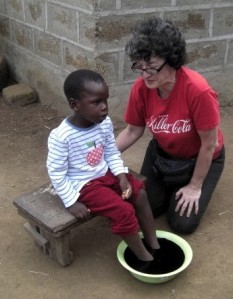 Kate Copstick is currently in Kenya

I arrive to find that our wonderful new Child Rape Rescue Centre (and my new home in Nairobi) is in difficulties.

A gang of local men are threatening to break in and rape all the children again and rape Joan as well. Four ladies came yesterday bringing clothes and food for the children and were set-upon and beaten. The gang of local men feel this is the best way to express their lack of enthusiasm at having a Luo woman running a project helping some Luo children (as well as many other tribes) in Ngando which they say is now proudly Kikkuyu. I am horrified. And puzzled. Ngando is not a Kikkuyu place. It is very mixed and all my friends there are Luo. The group of children range in age from 3 to 16. Including one boy. But they are all different tribes.

Last night I stayed with Joan’s delightful aunt and today we are looking for another house for the project.

I share my bedroom with a group of ravenous mosquitoes. 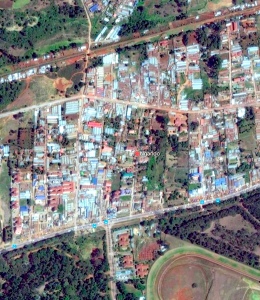 The Ngando area in Nairobi, Kenya

I am woken by a call from a slightly concerned David. He has been waiting for 30 minutes and Joan keeps telling him that I cannot be woken and that she has tried and failed. I leap(-ish) from bed, examining my fresh batch of mozzie bites and go downstairs.

“I feared you had been taken by the Luos,” says David.

We head for Satellite where there is a house available. We leave Joan and Tall Silent Dan there to wait for the landlady’s return from church and David and I go off and do a few things. Then I decide we will go to Ngando. I want to see the house for myself. And the renegade Kikkuyu threatening child rape.

Ngando is as I remember. Busy, buzzy and friendly. We park up outside the house that Joan had shown me in November. I get out and chat to the many children playing in the doorway. None of whom have heard of Joan. I didn’t feel I knew the chatty six year old in the party dress well enough to ask if she had been brutally raped recently.

There was a group of young men lounging about outside on the opposite side of the road. According to them, they do not know Joan, or anything about a project, much less ladies being beaten up at the house. I call Joan.

She is not at all pleased to hear I am in Ngando. Apparently this is not the house but, she says, she cannot give us directions to the real house. I tell her we will pick her up at Satellite and then come back to Ngando and she can take us.

At Satellite, Joan is pretty boot-faced. She is convinced I have been ‘corrupted’ by David.

There is a bit of a stand-off and we end up NOT going to Ngando but taking Joan and Tall Silent Dan back to Auntie’s place and then David and I go to the pub, drink beer and do battle with a chicken so tough it should be joining the SAS. I also meet a man who only turns out to be the Managing Editor of Standard Media (TV, radio and newspapers).

When I get back to the house, Joan and Tall Silent Dan are nowhere to be seen. But her Auntie is puzzled. She had been told I would be staying for a month. I run through the situation to date and she shakes her head.

And so to bed.

Still no sign of Joan and Tall Silent Dan.

Joan’s cousin Kevo and I agree that there is almost certainly no house in Ngando. I go.

We make it to the bank at Kawangware.

Doris is there looking fabulous. The new manager is smiley but Standard Issue. The exchange rate is not good so we go off to Forex. Via a meeting with Felista. At a new meeting place behind a petrol station in Corner.

I explain The Joan Situation and we agree I need to get a place on this side and forget working with her. Although I do not believe in babies being thrown out with bathwater – Joan might have been lying through her teeth to me but she has her good points. At the moment, though, I need to move on.

The Place Behind the Garage turns out to be a hotbed of business and politics. Big groups of men in suits huddle round tables discussing. As is the way with suited Kenyans, everyone is the Chair of something or the Head of something and the entire ecosystem operates by pulling strings – You pull strings for me and I will pull strings for you. Everyone eventually becomes someone’s puppet, but even puppets have puppets. Like the dog and the fleas.

Through Felista and her son, strings are pulled for me and possible flats and houses start to appear from nowhere. And so I sit and discuss the community project here at Corner of which Felista’s son is the Chairman. He talks about his ‘girls’. Who turn out to be anything from 18 to 35.

I clench my keeping-calm parts.

They are vulnerable, many single mothers, none of them has formal education, some have no ID. There are twenty six, he says. Or maybe fifty. By the time I have asked a few more questions there are maybe a hundred. Some involved in petty crime, many in prostitution and quite a lot in drugs.

And now I get an education in drug addiction on the Kenyan street.

The seriously addicted girls form a small group, they put in what little money they have and buy a hit of their drug of choice. One girl gets high and then the others draw off a syringe of her blood and inject it into themselves to get a hit off her hit. My mind is not easily boggled. But boggled it is now.

I have a powerful feeling I can do absolutely bugger all for these girls. Some things you cannot fix with TLC and a business grant and I think this is probably up there. However we agree that I will meet with the women who are helpable by an enthusiastic amateur like myself.

I am not going to let the project supporting victims of child rape just go, and Doris, Felista and I get our heads together over the possibilities. Of course, Felista has been rescuing abused children since she started. Mainly orphaned and abandoned. But she puts them together again and, in several cases, looks after their children. Because – well – at age eleven, your parenting skills are limited.

She has two girls with her now. Age fifteen and each has a baby of about three or four years old. At DECIP the mums are getting an education and support. My reservation is that when kids come to Felista they stay. And there is rarely a chance of bringing the rapist to justice. But we thrash ideas out.

Joan’s Auntie calls me. I am about to explain that I think I need to move out and she says Joan has called her and told her to get rid of me. Happy days. But we discuss the situation. Turns out Joan had also said I would be paying Auntie a month’s rent. Ah well.

I have a Mortein plug-in now and so there are no mosquitoes.

SPOILER ALERT – It is all fantastic. I am not homeless and the project is reborn as The Phoenix Project, much better than before.