Continuing edited extracts from Kate Copstick’s diary. She is currently in Kenya, working with her Mama Biashara charity. 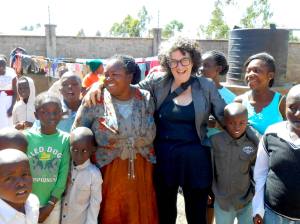 For the first time this trip I am a bit meh when I wake up. It has been incredible this trip. I have not so much looked at a painkiller. And nothing has swelled up, crusted, oozed or turned a funny colour. I thought I might be cured.

To Corner for food. Today seems to be the slaughtering-the-chickens day at Chicken Master. There is a LOT of blood around and piles of feathers and bits in the little room beside the entrance. And the smell of death. And piles of plucked chicken ready for sale. I have rice and cabbage.

I check on Doris who is deep in the forest outside Limuru with our next batch of terrified mothers with raped children desperate for the chance to flee their rapist husbands.

My phone abruptly dies. Falls off its perch. Becomes an ex-phone. Not pining for the fijords. Dead. With my life inside. Cos stuff doesn’t get saved to the buggering SIM card any more does it ???? NO !! It is about 7.30pm. To say I panic would be… well, OK I do get a bit unsettled. I set off through Corner and find a phone kiosk.

“Ah! – It just needs a charging,” says the young man. “The betri is veeeeeery low.” Fifteen minutes later he looks at it and says: “It is dead!” It is some sort of newfangled solid state thingy and the battery is non removeable. Without the phone I have no internet. WhatsApp. Messenger.

I get a piki piki – and immediately regret saying I need to get to Junction fast – I get to the phone shop in Junction just as it is closing. I get a slightly soiled ex-display techno-something for about £9. And I am phoneable. But with no numbers. But at least I am contactable.

I get back up the road to Corner. While online I get news that the compound in Rombo now has most of its fence, is about to get a gate and is looking gorgeous in blue and yellow. All paid for by Mama Biashara’s Phoenix Project. But nails and bits of wood and whatnot are surprisingly expensive.

I go to bed convinced amazing things are happening online and I can’t see them. Sob. 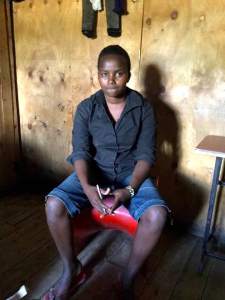 Nais – “She is not living in fear any more.”

I meet Nais. She is fifteen and Maasai from the Rift Valley. Her father killed her mother and then burnt down the house with the body inside. Nais and her brother were taken by her maternal grandmother to her village to live. However, being fifteen, Nais knew what was coming and she ran away. And travelled on foot, sometimes thumbing lifts, over a period of a month and a half, to Nairobi. Desert country. She was found by the police who brought her to Felista.

Now she is not living in fear any more. She is a charming young woman. After we get her story I ask if I can ask “a hard question” (Nais speaks Swahili but not yet English). I ask if she has been ‘cut’ (ie female genital mutilation). She says no, but that was why she ran. It was the season of cutting.

And now I see something I would never have thought possible – I see Felista shocked and totally discombobulated.

I ask Nais if the cutting is done the same way as in, for example Rombo. She says the old ladies use a pair of big scissors. Think tailoring shears. The same pair for all the girls that get done that day.

“Yote” she says. Everything.

“And then they put goat fat and cow dung?” I ask.

Nais nods. Although in the Rift Valley they sometimes use Kimbo (cheap cooking fat), possibly because a mere girl’s butchered undercarriage is not worth wasting good goat fat on. They also put sugar on the wound, for some misbegotten reason. And then periodically wash it with cow urine.

Felista is aghast. And incandescent with rage.

“I am hearing this for the first time and I cannot believe!” she says. “Why are these people not in prison? They will arrest people who were with Raila in the park… doing nothing… but they will not arrest people who do this to young girls?”

She is also furious at the many many many NGO who get quite a lot of money for supposedly educating about and opposing female genital mutilation.

“They do not tell you the truth,” she says. “They are just being polite because they do not want the wazungu (whites) to see how backward are these people. They should say the truth!!” And then, more surprises. “They just say ‘the cut’,” says Felista. “But there are many cuts. I was cut… everyone born 1959, 1960, 1961… We were all cut. But not like this!”

The Kikkuyu tribe traditionally cut girls. And women up to the age of 49. Although it has more or less stopped now.

Felista explains that, by the time she was cut, there was only one old lady who was doing it. When Felista was taken to her she told her that they would have ‘a secret’. She would cut Felista but not the full cut because she did not want to do that any more. So she bifurcated (split in two) Felistas clitoris.

“And then you put a leaf on,” says Felista, explaining the post-operative procedure. She makes a V sign with her fingers and waggles them. “It is also very good for the man”.

“But that was not like this !!!” says Felista, gesturing towards Nais. “We must mobilise. But we must meet with the shoshos.” She grabs my arm. “You cannot win a game with a fight. You win a game with a game.”

According to Nais there are a load of old ladies who earn about £12 per butchering. And, given there are no gloves, no disinfectant, no cleaning of the scissors and that goat fat and cow dung are readily available, that is pretty much pure profit.

Felista is fired up about joining our anti FGM arm of the Phoenix Project.

She reckons we can do a deal with the old ladies. Persuade them to stop (for cash, obviously) and create some sort of ‘pretend’ FGM involving sanitary pads and fake blood. No-one looks to check it has been done, says Nais. And no-one comes into the manyatta with the girl when it is being done. So only the girl and the shosho know what is really happening.

That is how it stopped in other tribes. When the old ladies do not do it any more, the practice just stops. For once, the power is in the hands of the old ladies.

When I come back in April, Nais will take us out to her grandma’s village and we can see what happens. And Felista is all for creating a home for runaway Maasai girls in DECIP. I have never seen her this worked up. I think it is a lot about never having been told the whole truth that is outraging her.

“You should be telling people,” she says, poking me in the chest. “You are on the ground.” I am indeed. “I think they are working from offices,” she says, doing a fair mime of someone at a computer. And it is true that the many many many many anti-FGM NGOs (it is a killer pitch if you want funding nowadays) tend to pussyfoot around a bit.

They do a lot of talking and never quite get round to calling a spade a bloody spade. There is a lot got away with under the blanket of what is, broadly, political correctness. And the government do very very little in terms of stopping it.

It is understandable (not forgivable but understandable) because he who takes on the entire Maasai nation would face an absolute nightmare of a reaction. With the Maasai you do not fuck. Really.

“They are worse than the Meru men,” says Felista.

Alarmingly – although FGM is illegal in Kenya (like THAT has made a difference) – a bloke called Kamau is working (with quite a lot of support – even from women) to have the law overturned and FGM legalised again.